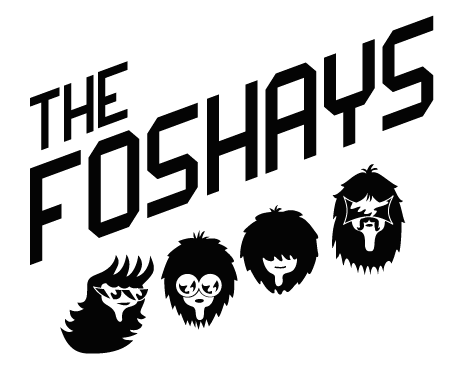 The Foshays are a band based out of Minneapolis Minnesota…a four piece consisting of Harry, Freddy, Franky and Joey that not only bring their own talent to the band, but also make it stunningly clear that if you don’t have a Y at the end of your name then there’s clearly no room for you within the lineup.

All jokes aside…kind of…The Foshays take a lighthearted approach to their music that is definitely open to include humor – but you’ll also hear from the new single “’Til It’s Gone” that they’re just as focused on creating something strong enough to last long beyond any one-liner.  Heck, I’d even go as far as to say that The Foshays have created a downright repeatable jam full of energy & spark on their new song.

Believe it or not…they actually reminded me of Death From Above 1979 when I first heard “’Til It’s Gone.”  The Foshays, for the record, sound absolutely nothing like Death From Above 1979, just to be clear…it’s not so much a sounds-like comparison as it is to the structure and movement of the song itself.  Like as if Death From Above 1979 decided to just grab a fully different set of instruments, dial back their raging aggression and just have some fun…maybe this is what it would come out like.  You’ll find it has a similar approach in the spirit of the writing and passion that “’Til It’s Gone” is played with.

According to what I’ve read, heard and seen…The Foshays are actually inspired by past animated music projects like The Archies, Jackson 5 and even Jem And The Holograms…because…well…because of course – that’s why.  I mean if you’re out there walking around and you haven’t been inspired by Jem And The Holograms in some way, shape or form – then how is it exactly we’re breathing the same air?  I assure you…it’ll all make a bit more sense when you add the new video for “’Til It’s Gone” into the mix…have a look/listen to it below and lets all get on the same page here!

So there you go, there you see, there you hear – the fun-loving approach & sound that The Foshays have is upbeat, modernized and still new enough to make them relevant for today, but you can tell they’re building upon bricks laid down for them long ago to create the path they now follow so enthusiastically.

Here’s what I know without a doubt, without question – enthusiasm like this is massively contagious.  Effort like this…which is obviously being put in with much foresight into their future…is also highly appreciated by fans & critics alike; essentially, The Foshays have very little standing in their way at all when it comes to winning people over in one way or another.  They’re clearly creating an entire brand with a specific vision – whether it’s the visual aspect that pulls you in through their animated capers in video or through their digi-zine, or the hyperactive garage-rock energy in the music itself, or maybe they just give extraordinary hugs when you meet them in person…they’ll get you hooked on what they’re up to.

Turn this UP and have some FUN with it – that’s exactly what The Foshays have designed this tune for and I fully recommend you follow their lead here.  “’Til It’s Gone” is bold, bright and upbeat in its sound…the solos are solid & entertaining…the lyricism is bound to snag some additional fans through the character and attitude in the vocals as well; it all rips by quickly at less than two-minutes in length but the experience is a memorable one, the hooks are definitely strong enough to stick with you – and that always leads to the people out there looking to listen all-over to enjoy its insatiably repeatable charisma & charm.  “’Til It’s Gone” is like the perfect song for the soundtrack of our impending apocalypse…I’m not saying rush to destroy it all just to hear this tune, but I am willing to go on record as saying this would be an entirely rad final song to hear as the world came crashing down around you, wouldn’t it?  I think so.

Find out more about The Foshays at their official website:  http://thefoshays.com/

Tags: Singles sleepingbagstudios The Foshays Til It's Gone