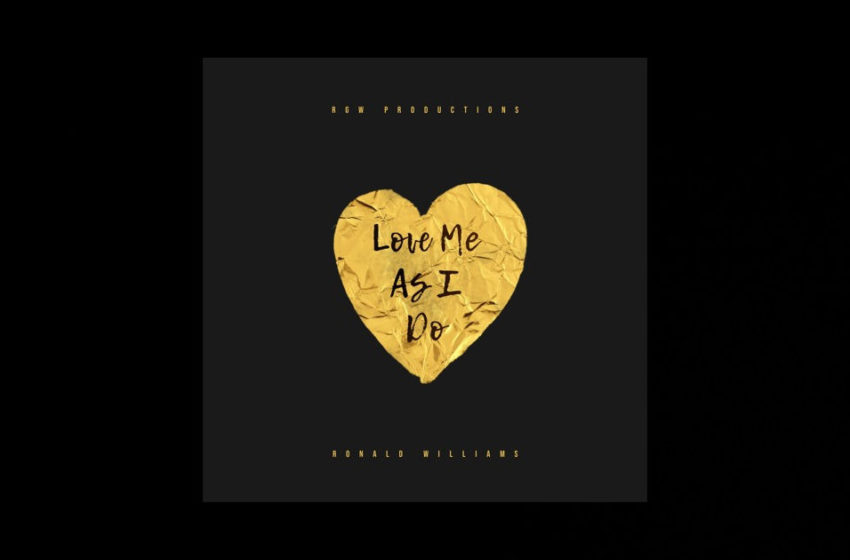 Ronald Williams – “Love Me As I Do” – Single Review

If you had a chance to read the review we published here yesterday on another of the latest singles from Ronald Williams called “Missing You” – you heard a lot of thoughts in support of what the man is capable of, specifically highlighting his abilities in songwriting.  While I might have had some advice & insights about that song that might help steer “Missing You” in the right direction as Williams works his way towards the next official release – much of what I had to say in my critique in that review, seems to have been addressed in-full when it comes to this other single, called “Love Me As I Do.”  Ronald’s got a brilliantly sweet song here, and it’s a great example of what he can accomplish at his most focused.

I think the first thing anyone will notice about “Love Me As I Do” is the music itself – the piano on this single is exceptionally beautiful, emotionally powerful, and so wonderfully melodic in its pairing with the warm atmosphere glowing around it, that I’d assume all of our ears are hearing what I’m hearing there.  Another strong checkmark in the win column for Ronald when it comes to the music, it’s got grace & an endearing subtleness to its flow that keeps you listening intently, and you’ll get a solid dose of it beauty, especially with the fact that he’ll give you nearly a minute’s worth of instrumental intro into this tune.  No concerns there whatsoever – I felt the same way about the music in “Missing You” yesterday – it’s all coming out spectacular, well-produced & played with heart, flawless in ideas, execution, and design.

I also felt like he did a great job on the lyrics to “Missing You” – and once again, I feel the same way about “Love Me As I Do” today.  The man writes a great song, that’s what I’ve been saying since day one.  What I loved about “Love Me As I Do” is that he uses contrast to his complete advantage here.  Have a listen for yourself and you’ll hear exactly what I’m talking about – the sound of this song is sparklingly sweet, yet the words themselves, for much of the majority of this song, delve deep into darker terrain.  Pointing out a lot of the burdens we share, the issues we face as society together and personally on our own – Ronald examines a lot of what’s wrong with this world of ours close-up, but also reveals the keys to battling it all.  Like I said, you’ll get what I mean by listening – he’s using great imagery in his lyricism to make a much larger point is what I’m saying…to get to the light, sometimes ya gotta go through the dark to get there…that kinda thing.  So while a lot of what he’ll sing about is questioning what the hell we’re all really doing with this planet, with ourselves, with the time we have – ultimately, he’s looking to remind us that we’re better than what we’ve become…and that there’s still time to do the right things.  Summed-up best by his own words in the chorus, he sings:  “We bleed the same blood, we all are the same, I hope you love me, the way I love you…”  Not only is it a beautiful & sincere sentiment, but that’s also a highly relatable concept…feelings that many of us share, whether on the surface or buried within, we all want to be loved – by everyone we meet.  I’m not saying it has to be ‘loved’ in any kind of romantic sense – and I don’t think that’s what Williams means here either – we’re talking about respect for one another, and treating people in the manner of which we’d like to be treated ourselves, feel me?

Vocally, I can definitely hear many advantages this single has over the last, Ronald’s pretty much bang-on for the vast majority of this tune and it’s a tough one to sing for sure, right in the upper part of his register for the whole song.  So props to that – I think he’s shown the restraint on this track and delivered the subtleness it needed from the microphone to suit the music on “Love Me As I Do” for the most part…couple spots where maybe I’d have an opinion or two perhaps, but minimal by comparison to how much is going right for him on this single.  I think it could also be argued that Ronald comes out with a more identifiable sound of his own on “Love Me As I Do,” as opposed to the moments in many of his other tracks where we can audibly hear the influence of a couple of his idols like Michael Jackson & Prince.  You can glean a lil’ MJ from this second single from Williams here this week maybe when it comes to the delicate approach he’s taken to “Love Me As I Do” – but sound-wise from the music to the mic, this is much more his own deal.  To me, that’s another strong plus; in RW’s quest to find his rightful place in music, it’s truly key for him to eventually tap straight into what makes HIM a noteworthy artist, as opposed to treading some of the same ground his predecessors have.  Towards the early parts of just about anyone’s career, that’s usually where it starts…we’re all inspired by what we listen to and it tends to naturally show up in the music we make as a result – I certainly don’t hold it against the man.  And considering just how well he can pull off a perfect version of what Prince or MJ can do at any time, and how insanely legendary both of those artists are – I’d play that card every once in a while too if I could!

Tags: Love Me As I Do Ronald Williams Singles sleepingbagstudios