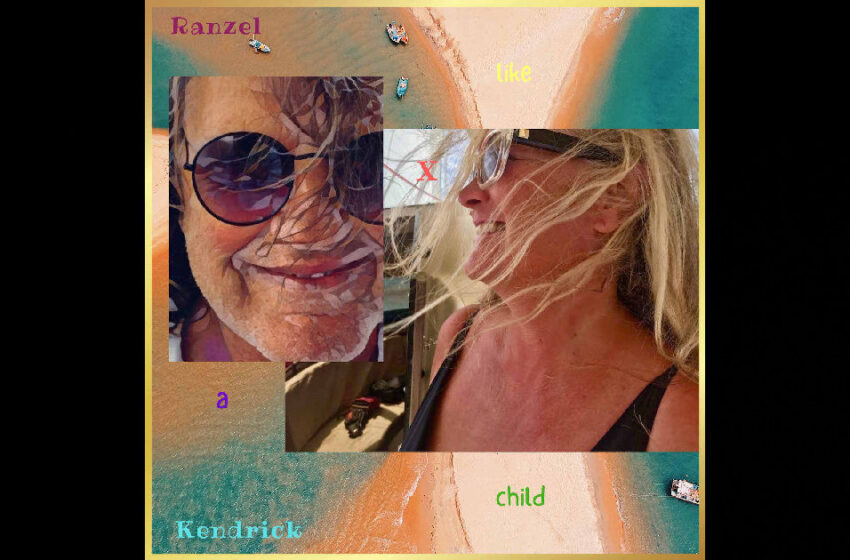 If you’ve been followin’ along with the bouncing ball over here at sleepingbagstudios, you’ve seen the name Ranzel X Kendrick pop up here over the last couple years with singles like “Seguin Son Of A Gun,” and “Crazy Love” from his Texas Cactus album, or you might have found out more about what he brings to music with the review I did in 2020 for his other project in the band Alias Wayne & their record FAVS.  Of all the material I’ve checked out so far, it’s likely the version of “Crazy Love” that would be the most relevant in comparison to this track “Like A Child” here today – even though this cut isn’t a Van Morrison cover, it definitely has that noteworthy Van-style songwriting & organic, natural melody guiding it along.  That being said, Ranzel is diving into deeper terrain than a mere love song can tend to afford; as charming as the man & sound of his new tune may be, if you’re listening closely, underneath its smooth & shiny surface you’ll find a ton of insightful commentary on society & politics in that good-good Folk/Americana approach that expertly blends thought-provoking imagery with genuinely catchy vibes.

You know what I mean…”Like A Child” is the kind of song you’ve played about a hundred times just for the sheer fact that you’ll love the easy-glide & mellow chill of the melody on display, long before you sit there and really listen to those words by X Kendrick and it occurs to ya finally that, he really has been saying something significant all along.  Don’t get me wrong, it’s not a knock against him, it’s much more of a knock against how we as listeners hear music if anything…but it’s not really a knock against anyone at all – it just simply is what it is.  We pass over all kinds of incredible stuff on those first spins, or several if we’re not paying close enough attention, of anyone’s music out there…and I suppose part of what I do here, is do my level-best to make sure you’re not missing out on anything that ya should be experiencing when you’re listening to the tunes I’m writin’ about.  Because when it comes to the charming sound at work, and the smooth glide through the melody & musicianship that Ranzel’s gently rockin’ with on his new single “Like A Child,” I’m fully confident in all of you – I don’t think anyone could miss that, not even on a first spin.  The rest, the connections that are drawn between the information & observations that Ranzel will sing at ya with such remarkably natural ease…well that’s where a bit of additional brainwork comes along, should you choose to accept the task.  That’s the beauty of a song like this y’all – if you want to, you could put this Buffalo Springfield-meets-Van Morrison type-tune on and have it spin its endlessly comforting sound at full blast without a care in the world if you wanted to…or of course, you have the option to dig even deeper to really get into the lyrics and get that much more out of the song.  So much so, that you’d likely be surprised by that first time you really absorb all of what’s being said & sung by Ranzel…the initial impression of “Like A Child” seems so friendly, pleasant, and natural; you can hear there IS a lot being said, but it’s like we almost push back against that mentally on those first couple spins because that music sounds so good, so clean, so inviting, so vivid, so colorful…so clear.  It’s a song that sneaks up on you with its insightful wisdom…I suppose that’s what I’ve been getting at here.

Who was that dude…the guy that started out as a wrinkled old raisin sack, and then became a kid by the end…I know it was a movie…Benjamin Button, right?  I’m confident enough in my answer to resist Googling it for now…but you know the storyline I mean; it’s the one about the guy that ages in reverse & all with Brad Pitt & whatnot.  “Like A Child” explores a similar theme in that regard…err…perhaps that is, Ranzel himself does…I think this dude is getting younger as time marches on.  Or at the very least, it’s probably more fair to say that within the context of his lyricism on “Like A Child,” he’s definitely launched into a reminder of how complex & over-complicated the world can become & has become – when really, if we were to look at this planet “Like A Child” would…the fundamentals of what’s important would be universally clear as clear as can be…and we’d likely realize we all want the very same things.  The point that X Kendrick is making ultimately, if I’m hearing this correctly, is that the kids had it right all along…and that the older we’ve gotten, the more obstacles we’ve thrown in our way…the more we’ve damaged the machine we’ve created that could have kept this rock we’re floating on, as beautiful as its original design intended it to be.  It’s about appreciating simplicity at its core, and how gorgeously sweet an uncomplicated life can truly be…and the majority of the way through this track, Ranzel achieves this by pointing out the opposite…how jumbled up things have become in society as a result of all the sophistications and progress we think we’ve made – but have we made any?  Really?  It’s that fearlessness of youth that generates change…and it’s that untainted perspective that is still filled with hope & possibility before the jaded cynicism of age creeps in to take over…permanently if you’re not careful.  Preserve your beautiful perspective on life…look at it “Like A Child” would, and recognize the wonder & splendor that you’re walking around in every single day…if you can do that, I promise ya, you’ll be just like Ranzel and find something worth exploring every time you open your eyes.  Politics and government are always gonna try to get in the way – and they will, if we let them – but you’ve got more control over that than most of us realize – you’ve got the option to look at the world “Like A Child” every single day of your life & never give up that inspired spark of wonder that makes it all worthwhile.

It’s always a pleasure to listen to this artist’s thought-provoking tunes and his spot-on musicianship.  Ranzel X Kendrick has a genuine gift when it comes to entertaining in a very all-encompassing way that gets a ton out of his instrumentation to keep you fully engaged, but always takes his tunes that much further through substance & meaning at the core of his tunes that’ll move both your heart & your mind.  With the naturally inviting style & sound he’s delicately rockin’ and the gentle wisdom in his every word, he comes out shining on “Like A Child” with a smartly written single that’ll have you turning it up, just as much as you turn over your thoughts along the way as you listen…which is what great Folk/Rock is all about right?  Stellar solo in the mix for ya…a perfectly flawless approach to the vocals & results there too…and highly enticing words that’ll make you consider what he’s sayin’ while you absorb the mellow groove he’s created…all-in-all, “Like A Child” is a pretty irresistible combination of substance, and style.

Find out more about the man behind the music at his official site, and stay connected with Ranzel X Kendrick right here at this link:  https://ranzelxkendrick.com