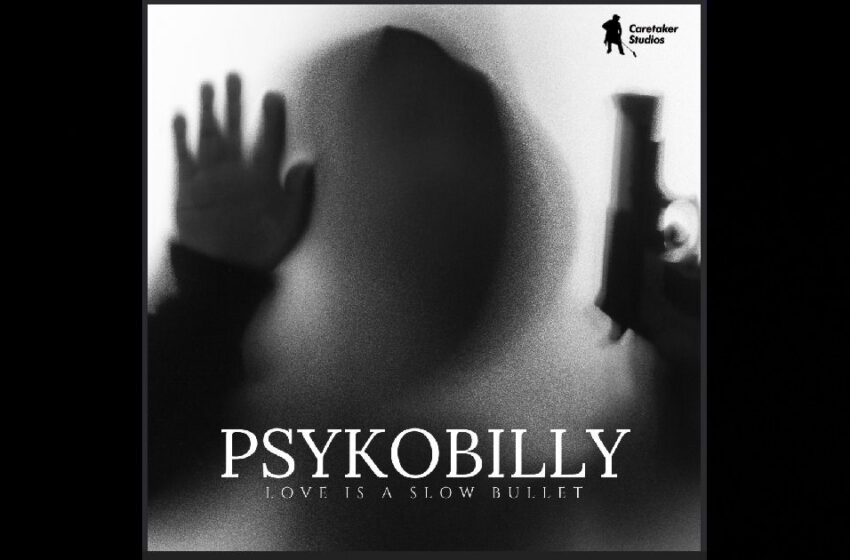 Personally, I love the spin on the Serenity Prayer at the beginning of the new Psykobilly single – that definitely caught my attention straight away – “Dear Lord…grant me the serenity to accept the things I cannot change, change the things I can, and the wisdom to hide the bodies of those I had to kill…”  #MayWeAllBeSoLucky

So let’s see here…where do I stand on this…what do I think?  First off – I’ll definitely say it’s great to have Psykobilly back in action.  People always think I’m gonna forget people after a certain amount of time – it’s mere weeks for some, months for others, years for many, and everyone’s wrong – I don’t forget.  Not for the most part anyhow.  If you make marginal or meaningless shit, and I’ve forgotten ya, then believe me, that’s on you, not on me.  I’ve always got the hidden advantage of looking up the archives at our pages if I need to, but for the most part, I remember just about everyone I’ve ever written about in a review over this past decade – yes YOU too Psykobilly…and heck, it was just about this time last year that I bought myself a copy of their last record, and then featured the band on the ol’ SBS Podcast too.

Anyhow.  Back to the present.  “Love Is A Slow Bullet” – I ain’t gonna dispute that.  Oxygen is a mass murderer too I suppose if we’re getting down to the nitty gritty of it all.  On the one hand, a track like “Love Is A Slow Bullet” is somewhat intentionally polarizing and it’s designed for shock value…that’s the reality – but equally true is that Psykobilly comes by it honestly…the subject matter might be grim, but this band has proven to be interested in the dark side of life, love, and death throughout the course of its career so far.  So contrary to popular belief, you CAN have both things…you can specifically design a song to be provocative without it being pretentious or contrived…you just kinda have to have the track record that backs it up, which at this point, Psykobilly has.  If there was a band that was gonna write a song about murderin’ & all that…chances are it was this one.  We all like what we like & love what we love…if murderin’ & death & all that horrific stuff is Psykobilly’s jam, who would I be to tell them that’s not what they should be digging on?  I don’t spend my time knocking on doors bringing Jesus to the masses, and I’ve already watched way more horror movies than most people will in the average lifetime; for the most part, I enjoy Psykobilly’s foray into the noir side of sound and can get behind what they do.

I’d probably put “Love Is A Slow Bullet” up there in the top tier of their catalog to-date I suppose…I keep trying to find a reason that I wouldn’t, but I honestly haven’t come up with one.  Personally, I like the fact that Psykobilly is willing to write about stuff others wouldn’t dare to…it helps balance out this whole life experience, which I enjoy.  I really like the Spoken Word element of “Love Is A Slow Bullet” as well – it’s fairly rooted in the synth-based 80s vibe at its core, but it’s got its own bizarre timeless vibe to it too.  Tracks like “How Soon Is Now?” basically paved the way for tracks like “Love Is A Slow Bullet” to exist today, and indeed, The Smiths did the same for Psykobilly as a band…obviously music’s been around longer than any of us have, but if we’re counting the last 120 years as making its main impact on us all, then that’s still hovering around a third of its history.  Like it or not y’all, the noir-side of sound IS in fact, timeless, and forever here to stay – bands like Psykobilly take the mantle and keep it thriving in the dark. 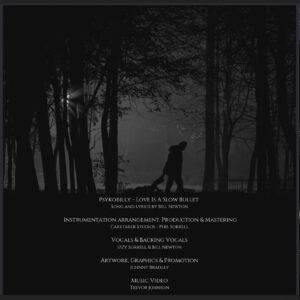 Things work out really well here for them though…the shadows serve this band for the better, and doing what we’re interested in always helps us achieve that.  Write what ya know…that’s what we’re always taught, ain’t it?  Well…don’t go sending the police over to the Psykobilly lair just yet folks, but keep’em on your radar…you get the idea – you don’t HAVE to be a murderer to have an interest in murderin’ I reckon.  “Love Is A Slow Bullet” has all the right attention to detail from the music to the microphone, and ends up being a solid cut in their catalog at the very least, if not one of their outright better tunes.  Bill Newton does a great job on the spoken word, and holds his own on the hooks when he’s singing as well.  Phil Sorrell has put together a lively cut musically to support this theme about death – the production is fully on-point, the song is dynamic, the bass is rumbling, and things sound excellent, especially when you consider how diverse a song like this really is in how much is involved.  From the dreamy to the dark, “Love Is A Slow Bullet” expertly glides like a haunting ghost through it all – and I dig that.  As we’ve experienced many times in the music of Psykobilly, and I’d argue we’re still experiencing right to this very day – Izzy Sorrell continues to be the real hidden bullet in the chamber of this band overall…everything we’ve heard up to the point she appears is good, no doubt about that – but it’s her part specifically that pushes “Love Is A Slow Bullet” from a good song, into what’s entirely memorable.  The hook she sings to fuel the chorus, is spectacularly realized and all-out perfection really…the kind of moment in music where you have to stand back for a second and acknowledge how well-suited it is, and that nothing else would have fit in that spot as snugly as what we hear.  So while I’d argue it’s highly likely that Psykobilly had already done enough to please their existing fan-base long before she shows up, once Izzy arrives, she seals the deal, and there’s no way you could have this cut without her after you hear how she contributes to it – you follow me?  It’s really quite something when you look at the DNA of a song like this…Izzy’s not as involved as you’d think this time around, showing up well-past the ninety second mark, and then only a couple of times to cycle through the chorus after that – so credit where credit is due…it’s a small fraction of “Love Is A Slow Bullet,” but it becomes its most defining piece for sure.  I’d be pretty stoked on this track if I was in Psykobilly overall…things came out strong here from all angles…nothing I’d change, nothing I’d suggest tweaking…all notes & tones on right where you’d wanna hear’em…it’s grim as all-hell, yes – but that’s what they intended of course, so right on!

Find out more about Psykobilly from their label at Caretaker Studios, right here:  https://www.caretakerstudios.com