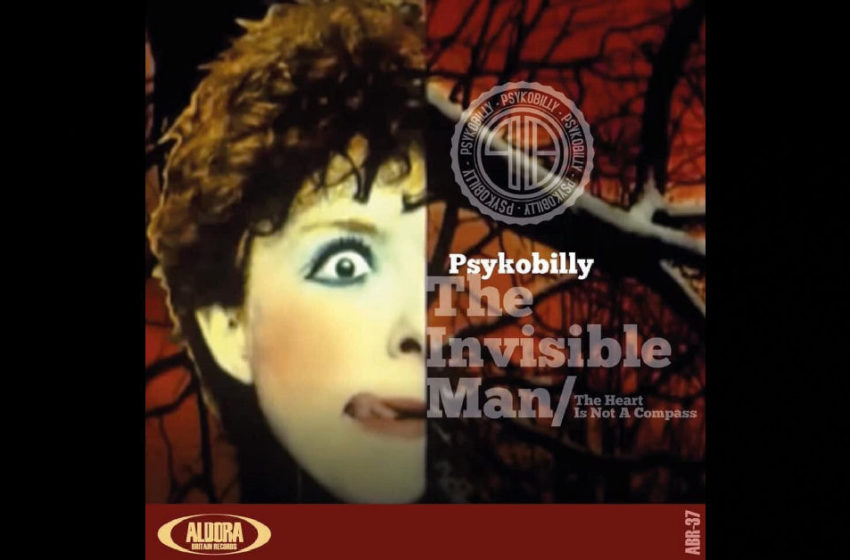 Stoked to have good ol’ Psykobilly back on our site & in our speakers once again this year – let’s do this!

All the way from Gloucester, UK, to our Canadian pages based out of the nation’s capital in Ottawa…y’all know me…I love hearing what’s happening in music-scenes across the globe, and I was highly impressed with the record Black Candle by Psykobilly when we reviewed that album in January earlier this year.  There are some names you just learn to look forward to when they show up again; Psykobilly is one of’em for sure – I have the feeling that we’ll always be bound for something new & different when it comes to this band.  Helmed by Bill Newton, the new single “The Invisible Man” was released on Aldora Britain Records this time around – and in what can only be perceived as the genuinely altruistic kindness that it truly IS, Psykobilly is donating the proceeds from this song straight back into the AB Records Community, in an authentic effort to assist in supporting the UK scene and help it continue to thrive.  I’ve got a LOT of LOVE for that move right there folks…I think we’re all aware of the time we’re in and just how crucial it really is to support all facets of the independent music-scene both in front of & behind the studio boards.  Seeing leadership like this from Psykobilly is inspiring…not only is it a good move for the local scene where this band is based out of, but it’s the kind of move that can set off a chain reaction around the globe.  Artists & bands pay attention to this kind of commitment and can appreciate, even from afar, just how remarkable a working relationship like this would be & certainly admire its potential – hopefully, they’ll take a cue from what Psykobilly is doing here, and help their own communities grow.

So!  Obviously all that is great.  The better news is that there is a ton going right here on “The Invisible Man” that bodes really well for the future of Psykobilly, in addition to providing ya with a killer cut to listen to right here in the present.  Notably, Phil Sorrell lends a fantastic amount of talent to this new single; he plays the instruments, he produces the song, and he’s done an exceptional job in both departments.  Personally, I’m all about it…not only do I think “The Invisible Man” is a solid track with highly memorable hooks, but I also think that the production plays a massive role in why I ended up loving this song as much as I do – so kudos to Bill & Phil – this is a pairing that completely works, 100%.  While the sound is entirely different in this comparison I’ll make, “The Invisible Man” actually reminds me a ton of what I love about the production on many R.E.M. records…like Phil could have easily over-polished this song if he wasn’t too careful, but he’s managed to maintain – if not outright enhance – the edge, grit, and raw honesty that was key to making this whole song come alive.  “The Invisible Man” has a dense & bold atmosphere that gives depth & weight to the theme of it all, which largely centers around the concept of “being used and then ignored by those who want to use you only when you are of use to them.”  When I read that, before I even pushed play, I felt the vibe of that theme ring horrifyingly true…I think many people out there in the world of art & music can certainly relate to what Psykobilly is getting at with “The Invisible Man,” and perhaps all too well.  For what it’s worth, I hear ya Psykobilly.  Metaphorically, audibly, musically…I’m listening.  No artist or band is invisible on these pages of ours.

And while the core concept of “The Invisible Man” may rail against that feeling of isolation & smallness many of us often experience, a peek behind the scenes really speaks to just how much Bill himself is rebelling against invisibility through the all-inclusive way this song was made.  From the assistance of collaborating with Aldora Britain Records, to the multiple talents lent to “The Invisible Man” courtesy of Phil’s efforts at Caretaker Studios – all the way to the appearance of Sorrell’s own daughter Isabelle, who does an exceptional job in backing-up & complementing the lead-vocals from Bill on this single.  In the notes I’ve got here, Psykobilly’s even made sure to shout-out Rik Bardsley for his artwork on “The Invisible Man” – and the song itself was dedicated to Bill’s son Jamie for his birthday!  You see what I’m saying folks?  No one is invisible to Bill Newton either – everyone plays a significant role in bringing this single to life, and they all deserve credit for their efforts, from the inspiration to the talents provided.

All-in-all, I’d be super happy with the results here if I was in the Psykobilly camp & contributed to this cut – “The Invisible Man” has a very memorable main hook in the chorus and I think you get a real highlight performance overall from the main man on the mic when it comes to this tune; Bill’s done a great job of pouring in the emotion & really expressing the weight of the thoughts & feelings this song conjures up.  The whole song expertly explores a truly surreal sound that hits the heights of its accessibility in the grip of its chorus – much like the last time I heard Psykobilly on the album Black Candle, once again I highly suspect a whole lot of you out there are going to seriously dig the vibes & sound this band is creating here.  And as I alluded to earlier…if you like what you’re hearing on “The Invisible Man,” I might just have a bit more great news for ya.  Word on the street is that Psykobilly is about halfway through recording the next record, which also just so happens to have the talented Phil Sorrell producing – and after everything we’ve experienced with this collaboration on “The Invisible Man,” I’d say that’s cause for celebration!  They’ve done an excellent job on this single from the time it starts with its clever use of a sample from the 1933 film of the same name, to maximizing the potential of the harmonies & hooks, with music on-point all the way through to the final notes – I’m excited to hear where it all goes next.

Listen to more music by Psykobilly at Spotify here:  https://open.spotify.com/artist/77JzN5d6M3x0miaH6OmxtR