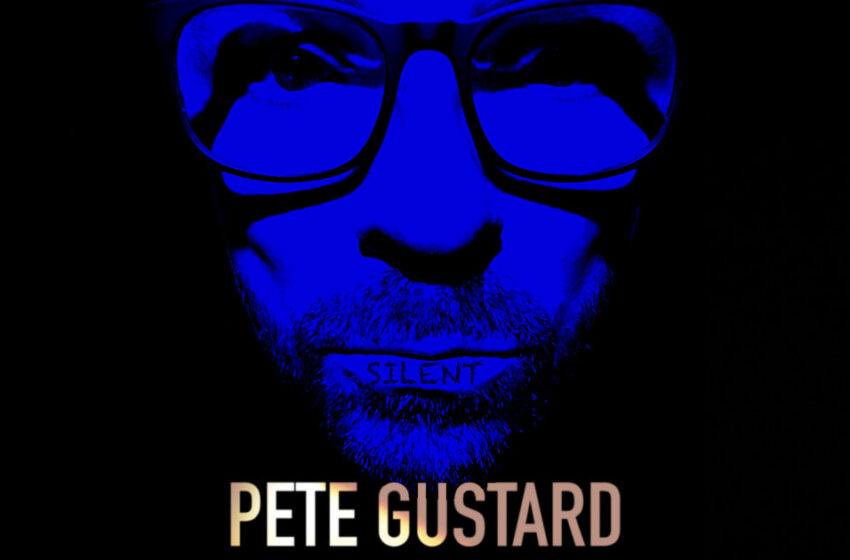 Ayyyyy – you KNOW we love having Pete Gustard’s music on our playlists!  Year after year this guy has put out records stocked full of tunes we love, whether it’s how we found him in the band Seashaped many moons ago, his solo work throughout the past couple years or so, or his latest collaboration in the band Giant Silent World that I reviewed earlier this year – Gustard’s a true man of music – full salute!

While he’ll break a cardinal rule of mine within this first track, for the vast majority of “The Dream Decade,” I’m lovin’ life – this is a freakin’ great tune without a doubt.  It’s got such a natural groove to it – it just works, you know?  Nothing forced about the music in this track whatsoever…everything sounds like it was meant to be with the gentle strum being the centerpiece to guide this song straight to your ears.  As for the hooks on this opening tune, they are BULLETPROOF y’all…like I’d be shocked to find out anyone could resist’em without actively trying to, you know what I mean?  Whether it’s the music or the vocals, or both for that matter, “The Dream Decade” is loaded with accessibility, authenticity, and appeal to the sound.  Stoked on the way this has come out for Pete considering the length of the song, the amount involved on a structural level, and the different effects being used along the way as well – put quite simply, there’s a whole lot that COULD have gone wrong in this track longer than six-minutes, yet somehow Pete’s avoided all that, and delivered a spectacularly engaging song that’s equally unique.  As to the cardinal rule of mine that he broke?  It ain’t the hand claps…though I’m always right on the fence with those in any song.  Keep in mind, it’s just a me thing, probably not a you thing or an everyone thing…but he writes about the smell of something/someone in “The Dream Decade.”  Keep yer nose outta what I’m listening to y’all!  I’ve said it before, and I’m sure I’ll say it again for some reason in the future too y’all…don’t do that…it’s just weird.  You can even be doing that in the context of something GOOD like Pete’s doing on this song, and it is STILL weird…it’s like you immediately start wondering how many people have ‘smelled’ YOU in a room…weird, weird, weird…don’t do it, don’t do it.  Lyrics like these make my nose start twitchin.’  Yet it seems like at least once or twice a year, I’ve gotta point out how strange this really is.  I ain’t saying it doesn’t happen – unfortunately, I think we’ve ALL smelled someone before whether we’ve intended to or not…but yeah…I just don’t think it’s as complimentary a concept as songwriters tend to realize.  Anyhow.  It’s a freakin’ fraction of a song, and even commenting on this at all is recognition of the FACT that Pete Gustard leaves anyone listening precious little to pick on or remotely bellyache about.  So don’t go thinking it affected my enjoyment in listening to “The Dream Decade” at all, because that wouldn’t be the truth – I might think that ONE LINE is WEIRD (and yes, I do, it’s weird Pete – have I mentioned that yet?) – but 99.9% of this song is absolutely irresistible.  Smells like victory to me brother.  I love the different things Gustard has added to this song from the multiple layers of vocals, to the record static at the very beginning, or the cassette flipping over along the way as you listen, roaming through the radio stations with the ol’ dial, the sound of things rewinding…it’s a really smart homage to different stages of our musical evolution, and finding that sweet-spot that has everything you really dig.

I think…of the four tracks on the Silent EP…I’m gonna go with “Indigenous” being both the most surprising cut in the lineup, but also the most single-worthy of the set as well.  That’s quite the achievement when you think about it…usually when something’s noticeably single-worthy, it’s not all that much of a surprise, you know what I mean?  Something about “Indigenous” really works its magic on ya though – I liked it at first, but I loved it by the time I wrote this review.  It’s truly not that often that we get the opportunity to really say what’s on our mind, and make it SOUND as awesome as the intent and meaning behind our words – make sense?  That’s what Pete’s done here with this exceptional track that’s all about the struggle of refugees, the difficulties of immigration, how skin color & our origins can be problematic in what’s supposed to be civil society…I mean, good lord – the dude has made the main hook of “Indigenous” one of the most brilliant moments in music you’ll hear this year, as Pete slips in a statement of acceptance, love, and respect that shows exactly where he stands on the many issues he brings up throughout this song.  “Cause we’re not fascist” is an AMAZING hook to have written into this song…as addictive as it is informative about the man behind the music…and highly EFFECTIVE in getting the point across too.  “What is the definition of being human?  It is simply being able to demonstrate compassion, sympathy, generosity, and understanding, without expectation” – I think this is one of the most beautiful things I’ve ever heard.  Possibly one of the most tragic too when you realize that, by this definition, there’s a good 30-40% of this planet that wouldn’t qualify.  That being said, the majority of us that have still got functioning brains that don’t accept being gaslit by politicians, reject cruelty in all of its forms, and base their lives on the light of love rather than the willingness to spread hatred & division – we’ve still got a puncher’s chance of turning the tides back towards this wonderful definition Pete’s put into the ending of “Indigenous.”  Doing that starts with YOU, with ME, and with ALL of us, every single day…we don’t get time off in that regard & there’s none left to waste.  Doing better than we did the day before should be something that every one of us WANTS to do – our prejudices and judgmental ways should be thrown permanently into the wood-chipper of history, and our focus on evolution, renewed.  I’m off on a tangent here again, but suffice it to say, this is a great fucking song that’s as based in serious subject matter, is powerfully entertaining, thought-provoking, and truly sincere if you know who Pete is.  That also sounds like Chris Smith in the backing vocals too…Gustard’s music cohort in Giant Silent World.

Alrighty…we get a bit of a breather with “Seen In The Right Light” slowing down the set-list in pace, but not in terms of quality or momentum – Pete’s still cruisin’ along with top-notch production and stellar sound.  Is it fair to say that “Seen In The Right Light” isn’t going to get the immediate nods of approval that the first two tracks on the Silent EP will?  I don’t think that’s any real secret…and again, it’s got nothing to do with the overall quality…I think a lot of people might argue a track like “Seen In The Right Light” is more tightly written at the end of the day – it’s a real songwriter’s type of tune, but it doesn’t quite have that same flashy appeal and universally irresistible sound in the hooks the first two cuts have.  Ain’t nothing wrong with that whatsoever – not every track we’re ever gonna write is supposed to make it to the radio stations, you know?  Sometimes we need that deep cut that adds strength to the lineup, and that’s what I’d argue “Seen In The Right Light” is like to experience.  Solid tune, no doubt about it – it’s just hard to imagine it’ll make the immediate impact that “The Dream Decade” or “Indigenous” did.  Love the backing vocals added into this track…love the lyricism and the sentiment of this song as well – it’s a solid examination of what makes love work, and how when we’re “Seen In The Right Light” it ends up revealing a whole different set of layers to the person we are.  Like how sunlight reacts through a prism, sometimes a different angle produces an entirely different result…and that’s a beautiful thing.  If anything, I’d say that Pete’s probably out-written himself from verse to chorus here…as in, you’re going to find the hooks of the verses will likely pull you in more-so that the chorus will, but it’s another solid cut to have added to this set-list overall.  Like I’ve been saying…I don’t know that it’ll quite generate the level of excitement, interest & engagement that the first two tracks will for certain, but yeah, good tune.

I am gonna have to be real with the man about “Moons” though – he’s just a bit short of where he’s aiming for in the melody department in certain sections of this track, coming just shy of the tone he’s truly looking for.  The idea is intact – and it’s great – I like that Pete takes on religious folks & God head-on in this track.  Given that I believe in Simulation Theory for the most part, the themes at the core of this song and the hook of “the matrix unfolds” appealed to me…the more life I live, the less real any of it seems.  Anyhow!  Petey!  You know the pieces I’m talkin’ about in the clash of the music/vocal melody that aren’t quite coming across as smoothly as they should be…I don’t need to tell ya, I know you know!  So fix’em up my brother!  It’s one of those semi-complicated decisions to make as an artist…whether or not to go back & clean things up…at the heart of it all, I’m not entirely sure the majority of people out there would dig on this track as much as Pete himself might…so as to whether or not you go back over a song like that with the fine toothed comb it needed now…it becomes much harder to say.  What I do like is the level of innovation and imagination he’s not only put into “Moons” but into this record at-large – if you’re really listening to it, the detail in the structure, the writing, and the production…it’s STAGGERING y’all…and Gustard should really be proud of the beast he’s becoming on both sides of the studio boards.  I would venture a guess that “Moons” was likely the newest song in this set of four…sometimes we’ve gotta take a few moments to let things sit with us…figure out if we’re just excited at the time in the heat of the moment, or whether or not we’ve got a cut that’ll hold up strong to the test of time & repetition.  He’s got the right idea, the concept is fantastic, and there are still plenty of redeeming spots in “Moons” to make it well worth your while to listen.  If you’re asking me about the way things sound, I’ll tell ya that he’s nailed the other three-quarters of this record spot-on, to the point where he’s again delivered some of his very best to-date…and while this final tune might drift a bit further from the mark in that regard…if 2 out of 3 wasn’t bad for the all-mighty Meatloaf, 3 out of 4 is statistically better…just sayin.’

Find out more about Pete Gustard from his official page at Facebook:  https://www.facebook.com/petegustardmusic