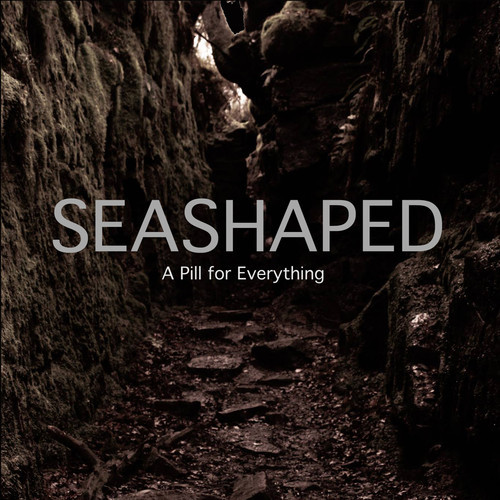 Seashaped – A Pill For Everything – Album Review

At least that was the first thing that came to mind when pushing play on the Seashaped album! You know what I mean though? It’s…pleasant! Music that I can’t see anyone ever frantically running over to a stereo to turn down the sound on…yeah – that’s what I’m trying to say! Seashaped, from my experience, are not only extremely approachable and friendly as people, but apparently their music spills out of that same vein!

A Pill For Everything – a concept altogether too true of our society, mind you one that I’m not yet convinced is a totally bad thing! I mean…I’m all in favor of holding two separate Olympic matches; one for the “straight & narrow” and the other for the pill & injection-heads that want to see just what the limits of this human-body-machine really are! Think about it…it’d be awesome…

This duo from The UK consisting of Alison Riley and Pete Gustard are creating some really inviting, warm and beautiful sounds. Spread out deliciously over the span of A Pill For Everything, the album moves like reading a good story, sharing a “Kodak” moment with your friends, or the gentle soundtrack you’ve always wanted to wake up to in the morning. Self-described as “easy-going,” dear readers – I couldn’t agree more with that!

What I like a LOT is the variety of sounds they’ve chosen while still retaining that easy-going feel. You can hear in a track like “Kitchen Party,” which leaves behind the somewhat acoustic feel of the previous songs and takes the album into funk & disco territory. It’s an interesting track to me for several reasons, the first of course being that it was such a radical departure from the feel of the rest of the album. Don’t get me wrong – the layout of the tracks really does lead to that bursting point; it’s a well-planned album…

But it’s the first and I think only song on the album where if I had the studio-cans over my ears…I might have demanded that Alison give me that 10% I felt her holding back on this song!

First of all – I think she has a beautiful voice. There’s been nothing in any of the tracks that hinted at anything other than her own perfection; a fragile, delicate and passionate voice that delivers smoothly over each and every track she’s leading on, and adding the perfect harmonies on the songs backing up Pete, like “Will You Be Mine.” On the former track in question, “Kitchen Party” – I felt like there were a few moments where she was caught in the flow of a really unique and wonderful song, something almost challenging their own version of “normal” and could have went for it just an edge more. Cause what she’s doing on the track, is truly fantastic.

But perhaps that could be part of it. With it being so far outside of the comfort zone, it sounds a little unsure. Again – if this even WAS the case, she shouldn’t be. She should have every bit of confidence in her fantastic abilities and voice, especially if you compare it to the way she attacks a track like “Slipping Down.”

But in contrast…had I not ever heard such a solid & firm performance in “Slipping Down” – I might not have ever been so demanding for more in “Kitchen Party!”

Alison – it’s just that I know you’re MORE than capable of it! 🙂

Really! “Slipping Down” – I mean if this isn’t a singer at their finest moment, then again, I haven’t heard it! Alison hits her stride in this track, delivering with confidence, passion and conviction.

Pete’s an interesting cat on the vocals as well – I dig what he’s doing a lot as well. Not limited to any particular sound or style; naturally he sounds like a cross between Michael Hutchence of INXS and the lead singer for Better Than Ezra – but he’s also not afraid to mix it up and try new effects. Often harmonizing with Alison, they find a beautiful combination in their voices no matter which direction Pete chooses. They’ve also done some immaculate work through production and subtle use of samples.

“Life Gets In The Way” – an absolute gem you’ll discover deep into the album, shows their deep affection for rhythm and putting together songs you’ll not only be able to relate to – but that will make you move, physically AND emotionally. The evidence becomes even stronger in the title-track; “A Pill For Everything” swirls like an epic theatre performance…you can almost visualize them assembling shows with orchestras, amazing lights and an all-enveloping atmosphere.

It’s an epic song, and one that certainly earned the right to title the album. And while there might truly be A Pill For Everything in this day & age – you won’t need to rush to the medicine cabinet to endure this new album from Seashaped – far from it.

In fact, much like a drug…there’s a good chance you’ll find yourself hooked.

Check out Seashaped further and give their page a like at: https://www.facebook.com/seashaped