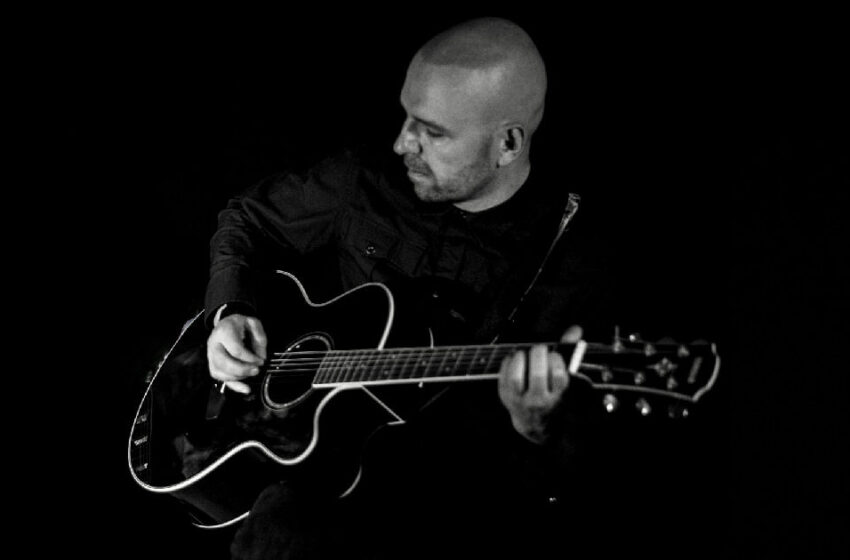 SBS:  Hi!  Who are ya?  Nice to meet you (again?)!  Glad to see you’re among the savvy out there paying attention to what’s up at our page.  Now spill all the details friend-o – tell us about you & your music!

Pete Gustard:  Hey Jer!  Who am I?  Seriously, I ask myself that same question at least once a day!  If you’d have asked me that same question exactly one year ago, I’d have said something on the lines of ‘just a musician trying to do his thing in a world full of endless musical possibilities and great people to work with’, but right now it might be more like ‘I have no idea.’  I’m just perpetually confused at the world.  Live music and working with other musicians feels like a distant dream …but, on a potentially positive note I do have a better understanding of my capabilities and limitations with regards to alcohol, high calorie snacks and social-isolation.  🙂

But really…. I’ve been in and around the UK music scene for a good few years, mostly as a gigging guitarist in a number of bands who wrote their own material.  I grew up in Manchester in the UK, so it was kind of mandatory to join a band before you could eat solid foods.  In recent years I wrote songs and released albums with Alison Riley in a project called Seashaped, which lead me to release my first solo album in early 2020.

I don’t really have a style or genre.  I like telling stories and tend to have narrative themes in my music that links within and in between projects.  Musically, I’ve always admired and have been influenced by the great funk movement in the 1970s (think Clinton’s work with Funkadelic/Parliament) and that is reflected in some of my guitar work, but actually the greater influences probably come from my upbringing in Manchester and the vibrant indie scene that flourished there.

Music never ceases to give me a sense of wonder.  It’s literally what gives me the power to get up in a morning!

Pete Gustard: …horrified me with what humanity was capable of, whilst at the same time instilling me with hope that we could get through anything!  Life has never been so binary!

SBS:  Undoubtedly, this past year was one seriously hard year for just about everyone, and even harder on others.  Let’s see what we can do to dwell on the positive side here – there was a lot of time around where there typically wasn’t before – did you use it wisely?  Were there any positives for you in 2020?

Pete Gustard: In the summer I walked and walked and walked and, erm, walked!  The weather in the UK can be, well, unpredictable shall we say.  In summer it can largely be described as wet, but slightly warmer than not-summer.  But this year, thankfully was different!  It actually remained warm and dry for months …which meant I could be outside getting fresh air, exercising, writing music and pondering exactly what the hell was happening in the world!  I even managed to film one of my videos for my last album, gorilla style, out on walk… it meant I had to think differently and some of it was fun.

I tried to collaborate with other musicians remotely and some of it really worked… you still need that same room feel for some song writing, recording and jamming, but I feel like there were still some great moments of shared musical creation and ideas even given the distance.

SBS:  What would you say the year 2020 taught you most about life from a musician’s perspective?

Pete Gustard:  Privilege!  We are (or were to some extent) so privileged!  We took so much for granted, we had great music venues, studios, rehearsal spaces, access to each other without restriction, social gathering and idea swaps, friendships, family, FREEDOM …and we never really knew.  We still complained about the mundane.  That won’t happen again, I’ll relish and drink in every moment of those privileges when they start to return and appreciate them for what they are.

SBS:  Do you have plans tentative or concrete plans to get back onstage or in the studio this year yet?  What are the short-term plans for the future?  Got any new music coming that we should know about?

Pete Gustard:  I’ve not been short of writing new music this year, and the one thing we have all had is more time.  I’ve got a slate of new songs (some solo, some collaborations) and I’m hoping to release some new solo material this year and work on some collaborations.  I’ve been part of a new collective ‘The GSW Project’ – which is a loose song writing/ideas factory with two great musicians and friends Chris Smith and Neil Wilkinson that wants to write and release material, but we just need access to each other to see its full potential!

Live wise who knows?  I worry for the venues.  But I will be back on stage at some point, probably some small acoustic gigs maybe ….at some point!

SBS:  In the rebound from Covid-19 – what’s going to be key to reviving the music-scene, and how can you & your music personally play a role in that?  Will it ever be the same?  Is there anything you’d like to see change from the way that it was before when it all comes back…from yourself, or from the fans?

Pete Gustard:  We all need to value our local independent musicians and music venues more.  We took too much for granted.  Personally I want to visit, play and support anywhere and everywhere I can when things are back open.

SBS:  What were your three favorite albums of the year?  Or most listened to…we’re not picky – what music got you through 2020 & what was it about those records, artists, & bands that kept you listening?

Pete Gustard:  Ooo that’s tough!  In lots of ways 2020 has been retrospective in music listening terms (so I reach to the past in my usual eclectic music fashion and reach for things like (depending on mood) – Parliament/Funkadelic, I Am Kloot, The The, Fatima Mansions, Buzzcocks/Magazine, PJ Harvey, Beck, Bowie ..and so many more!  All these artists remind me why I LOVE music.  They offer me endless ways to think about life!)

But, off the top of my head this year has brought lots of highlights, but the first 3 I can think of might be;

Laura Marling – Song for Our Daughter

SBS:  What would you say your New Year’s resolution would be when it comes to your music?  What do you want to change?  How do you want it to evolve or be different than it already has been – or do you?

Pete Gustard:  Just do more!  Try harder!  I want to enjoy every moment I spend creating music with other people.  I will never rush a project again…..

SBS:  Wide open question for ya.  Outside of music – what is your biggest hope for the year ahead?

Pete Gustard:  Wow, where to start with this!

I hope that we recognize we are one human race, one planet, one small pale dot swirling in a galactic melting pot of unknowable beauty and if we stand together we can and will be anything we want to be!

Pete Gustard:  For me, feeling safe enough to give my mum a hug again would make my 2021.  If I release some more music that would just be a massive bonus.  🙂


Find out more about Pete Gustard from his official page at Facebook here:  https://www.facebook.com/petegustardmusic