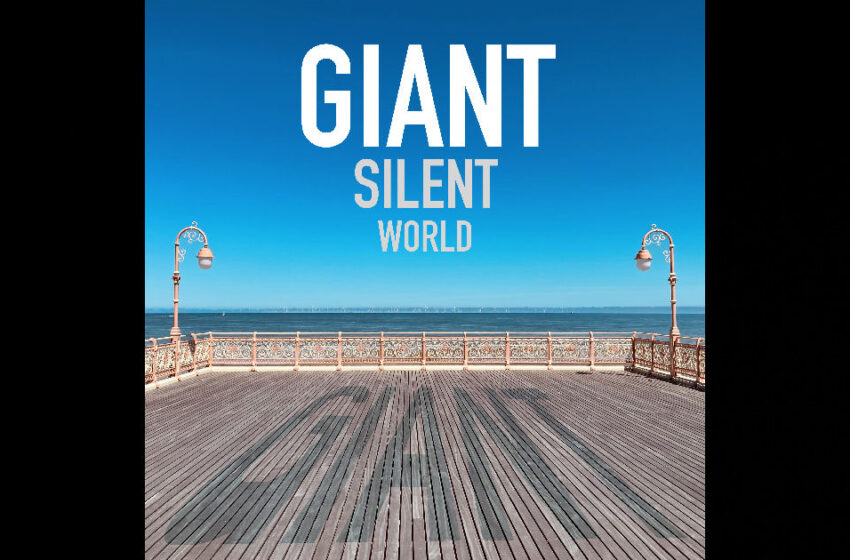 Music from a source we know we can trust?  How the heck did ya end up here?

Giant Silent World is comprised of two dudes…you’ve got Christopher Smith on the mic, and a previous nominee for our Best New Sound of the year in Pete Gustard makin’ the music happen for ya – and as far as I know, their brand-new debut record, the Giant EP, is out there & available on all platforms now.  Pete’s been rockin’ solo for the past couple years or more, post-Seashaped, another band we used to dig on that seems to have been locked in the dormant stage for many years now…so it’s been a while since he’s had any real help in making his music, and I’d imagine it’s probably nice to kick the ol’ feet up and let someone else like Chris have a crack and taking part in the fun and creativity.  Knowing Pete as well as I’ve come to know him and his music throughout the years, I was pretty damn sure I’d find something to like or love on the Giant EP…as for Chris – I’ve tried to keep up with his posts & long given up on that.  Dude’s a fireball of energy that seems impossible to contain or calm down…but that seems to work out here in the context of what they’re creating together as Giant Silent World – this all sounds good to me. 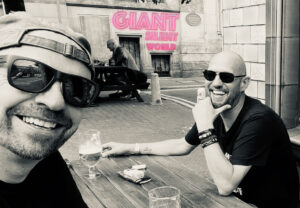 So let’s see here, let’s see…what’s fair commentary to lay out for ya in context & regards to this shiny new EP we’ve got.  I’ll say this much – I freakin’ LOVE the menacing intensity that instantly comes ragin’ through the speakers with “Forever West” – for a band called Giant Silent World, I can promise ya, you’re gonna hear’em loud & proud boomin’ outta your system from the get-go as the Giant EP kicks off.  “Forever West” is as gnarly as it is electric in the live-wire sense – this is amplifiers UP type-music, and probably as aggressive as I’ve heard Pete playing in that regard for quite some time, if not a whole level beyond what I’ve heard from him in any of his past projects or tunes.  It works out really well in my opinion – like…LISTEN to that crunchy-ass solo goin’ on just past the 3:45 mark will ya?  “Forever West” doesn’t just step timidly outta your speakers and into your ears – Giant Silent World explodes with energy, style, and swagger from the very first moment & opportunity.  A lot of that swagger, mind you, comes directly from the madman on the microphone – if there’s ever been a yin to Pete’s yang, thy name is definitely Chris – the man exudes confidence and I feel like he sweats it out of every single pore.  But that’s actually a really good pairing with Pete’s professional control and calmer personality – music like this clearly draws him out of his shell and comfort zone a bit, and the results you hear in the atomic level of kickassery goin’ on in “Forever West” should be enough for any ears to know this all worked out.  I’m about to travel what’s gonna feel like “Forever West” at the start of the next month as I relocate back to the west coast of Canada where I came from in British Columbia…I can only imagine having this track on in the car is going to see the gas pedal get lowered straight to the floor in approval – this first cut was made for driving y’all…at least, that’s my theory, and I’m stoked to test that out.  Oddly enough, I feel like even though GSW is rocking with a significantly different sound overall, the most comparable band I can think of off the top of my head would actually be The Cult and what they put on their self-titled record back in the day…it marked a major shift in their sound, put more aggression in the mix, and resulted in some wickedly groundbreaking Rock music that I still can’t get enough of to this very day – this is a lot like that.  “Forever West” should be more than enough to get y’all interested in this Giant EP.

“Pear Street” certainly gets my approval…this cut gets that from me pretty much instantaneously, and I’d be willing to bet I won’t be the only one feeling that way.  Smith’s like part Astbury, part Lanegan, part all-out otherworldly…but however you wanna describe him or whomever you’d find yourself comparing him to, I’m sure we can all agree – this dude’s puttin’ in the work on the microphone.  You can feel the extra haunting vibes creeping into this song in the verses before it sparks together with that core built of nuclear fusion…interesting in the sense that, I wouldn’t even say that’s even really the chorus so much as a highlight moment & hook in the song that seems to roar to life outta nowhere.  “Pear Street” is a little less conventional in that regard…it’s not that you won’t eventually clue into what’s a verse and what the chorus is of course – but you’ll likely be surprised by which elements of this track end up making the biggest impact on ya.  Heck – they’re probably surprised by it all themselves.  When “Pear Street” flexes the strength of its raw power, it’s a moment you can FEEL…it even blow you straight across the room with the push of sound outta your speakers at the peak of its intensity – and the only thing that can seem to rival that, or balance it out, is the supreme level of cool that comes along with it in the verses.  It’s probably a bit tougher to decipher everything that Chris is singing about than people would remember from Pete’s music in any capacity in the past…and like I said, I’ve read the guy’s social media posts…and if you can follow this guy down the rabbit hole, I wish you nothing but success in trying to keep up with him.  He moves at warp speed from thought to thought, spelling, punctuation, and completeness be damned…but for what it’s worth, his methods on the microphone seem to come out perfectly intact with everything we need to be able to get a handle on enough of everything.  We’re all a fairly understanding bunch as listeners…we don’t expect to grab onto every word, so much as we want to connect to the singer of any given band in a completely different way – we wanna feel what they’re feeling, or get as close to it as we can.  Smith has no problem whatsoever in that department – the man’s lettin’ it rip from the microphone and gives you plenty to grab onto in that regard.  “Pear Street” really has this brilliant mix of untamed energy & wildness with a professional level of coolness & chilled-out swagger.  From the eerie vibes of the verses, to the amped-up intensity you’ll find in the most aggressive highlights of “Pear Street” – one way or the other, they really earn your attention here.

“Noah” is probably the most vividly tangible idea of the bunch…and ultimately, if you told me this was your favorite song on the record, you’d get nothing but a high-five from me.  I’m still more partial to the first two cuts on this EP than I am the latter two, but quality-wise, these two dude have been giving it their A-game the entire way through the set-list, and of course that remains true here on “Noah.”  Guitar-wise, Pete deserves some real credit for how killer he’s been throughout this whole EP – he gives ya the straight-up wildfire you experience on those first two tracks, which is nothing short of amazing – but here on “Noah” you get a bit more of a controlled cool goin’ on, that makes plenty of time for sonic uniqueness through cleverness in the tone & frequencies.  Really smart use of backing vocals all throughout this track too…like to the point where, you might not even notice that’s what’s actually happening in the mix until you really dial into what you’re listening to…”Noah” is such a solid jam that a lot of what’s goin’ on sounds simply like it could be more instrumentation, which is seriously awesome.  I’m all about using vocals as an instrument when it comes right down to it – by definition, that’s exactly what they are – some bands out there just tend to use that aspect of their music better than others do.  Add Giant Silent World to the list in that regard – the actual use of “Noah” in the background – like, the name itself…is beyond incredible, and a real highlight moment among highlights on this shiny new EP.  Bonus points for the ambience it begins with, the Nick Cave-like presence of Smith and the way he commands his performance on the mic, the exceptional quality of the production overall throughout this whole set list & in the dynamics of a cut like “Noah,” and the way these two musicians fit so snugly together.  These are pretty damn wild tunes all-around, but Pete & Chris clearly play on a unified front.

Talk about wild though – I would never have expected “Dirt” to have come out of a Pete Gustard-based project…this is definitely a new vibe for the guy, and further proof that going wherever the music takes ya can be a genuinely great thing when it comes to creativity & art.  You never know where you’ll end up, am I right?  Sometimes you end up in the thick of inspiration, jammin’ it out, and the next thing you know, you’re right here, deep in the “Dirt” and damn near adjacent to Depeche Mode from around the Ultra-era.  Again, I ain’t gonna be the guy that pretends he can follow them ALL the way down the rabbit hole, but I can get pretty close – Giant Silent World locks into a bizarre alt-party groove here, and quite honestly, it works out really well too.  Like I’ve been tellin’ ya from the get-go, I’m personally most partial towards the first two cuts on this EP, but I’d never think of takin’ any points away for what they go on to accomplish in the latter half either…there’s gonna be a whole lot of people that have “Noah” and “Dirt” as their favorites, and that would make just as much sense to me when it comes right down to it.  I suppose the reality is, “Dirt” could be considered to be a looser idea, tightly played – closer to the whole Electro genre without ever actually being too much of it…if that makes any sense.  Kind of how a song like “Not For Nothing” worked out on Dave Navarro’s solo album…or, much of that album when it comes right down to it really…the fringe…Giant Silent World is ridin’ the fringe…I guess that’s what I’m sayin.’  Whatever you compare’em to, or whatever it sounds like to ya aside – I think we can all agree this is one heck of a tasty treat for your ears from start to finish, and a debut to be proud of – the Giant EP is a highly memorable experience overall, and it’ll definitely make you hope there’s a whole lot more to come from this duo.  I won’t lie to ya – I’ve been a fan of Pete’s music from day one since I first started listening…and hearing how Chris has brought him even further out of his shell was seriously cool – I figured that I’d like what I found on the Giant EP, but was extremely pleased with how unpredictable it was…for a four song set, it gives you an album’s worth of ideas, and plenty of reasons to repeat it all.

Bonus shout-out to Chris Smith, who just went & got himself married – congratulations to you & Joanne – wishing you all the happiness in the world my friends.

Find out more about Giant Silent World from the official page at Facebook here:  https://www.facebook.com/thegswproject