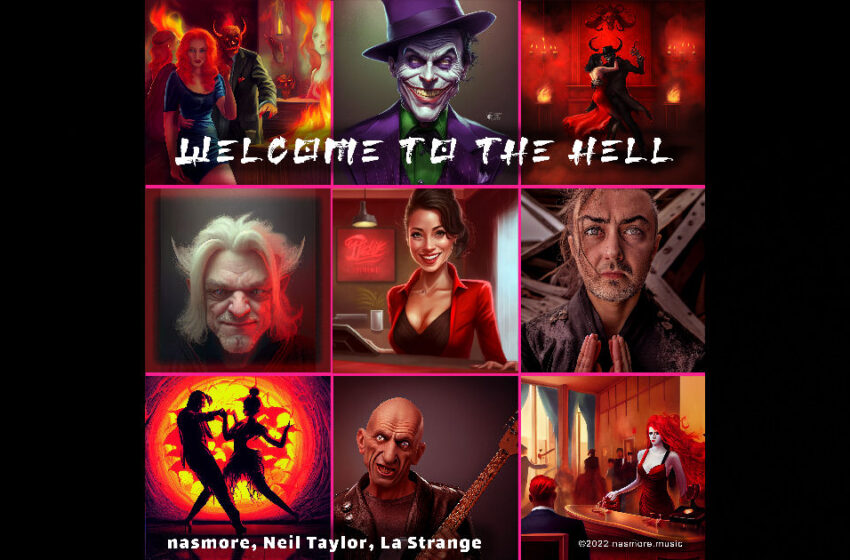 “Welcome To The Hell,” you say, eh nasmore?  That’s one heck of a way to say Happy New Year I tell ya.

So let’s see here…let’s see…how do I feel about this new single from our Canadian friend…what do I want to say & what can I fill ya in on.  Do I still need to introduce him to ya?  Y’all know the name by now right?  We’ve reviewed plenty of nasmore’s tunes over the past year or so…talked about him plenty on the SBS Podcast & whatnot…I’m assuming all you music-savvy folks remember the man, and you know he never stays away for long.  “Welcome To The Hell” is his brand-new tune, featuring La Strange and Neil Taylor, the latter of which we’ve heard collaborate with nasmore in the past on tracks like “When Will I Learn?” & “Safe In My Dreams” from last year.  Seeing this new single “Welcome To The Hell” tagged to the Ciné-Rock universe was a good move on nasmore’s part…that made me smile…it’s definitely where a song like this belongs.

With that being said…it’s really a matter of what he chooses to do with it from here, in my opinion.  Being a Ciné-Rock song & all, a track like “Welcome To The Hell” becomes very visual through its details and the expression you’ll find in the music & vocals…which is great in the sense that it’s like something you can see in your mind, but of course, with the lack of imagination people tend to have in the modern era, people are gonna actually want to see it as opposed to filling in the visual blanks for themselves.  Like, to me, “Welcome To The Hell” is the kind of cut that needs to be a part of a Rock-opera or theatre experience of some kind in order to reach the full potential that it has…I’m not sure just hearing it is going to do it quite enough justice if I’m being real with ya.  On the bright-side of things, that’s a great indication that a song is somewhat larger than what your speakers will be able to provide ya with…and the flipside of that coin is that there’s a whole lot more work to be done if it’s gonna reach the masses.  Such is the plight of all-things-Ciné-Rock though…either they get the visuals they deserve, or the songs can feel like they’ve missed the opportunity they require to be as successful as they should be.  You’re not going to find typical hooks in a track like “Welcome To The Hell” – it’s designed in that theatrical type of way that somewhat needs to be seen in order to fully support the deranged drama within the ideas you hear.

I tell ya…an artist’s work is never done my friends.  You spend all that time refining a song like nasmore and his crew of cohorts have here on “Welcome To The Hell” and some jerk like me still comes along with a big ol’ pitchfork, demanding MORE out of it.  What else can I say nasmore – “Welcome To The Hell” of being an artist in today’s world my friend!  Song-wise, there’s really nothing to complain about – everything is in-line with where you’d want it to be in terms of performance and production – but that’s really dependent on the fact that it gets used with some type of visual element.  Without it, I’m not sure that “Welcome To The Hell” is quite as able to stand on its own…it has terrific dynamics and definition, which is all well & good…but a track like this needs visual support if it’s going to reach a wider audience.  That ain’t a bad thing…and heck, I’d only hope that within the Ciné-Rock realm, all of what I’ve said would be expected commentary.  Hopefully, that’s exactly what nasmore’s got planned, but I don’t know.  “Welcome To The Hell” has that like…circus of mayhem type-feeling to its whole atmosphere, like the introduction to a special night of mischief…it could work in a variety of settings from the beginning of a movie, to a large-scale type of theatre play or even something like the start of a monster-truck rally.  As it’s written, it’s intended to revel in its mischievous vibes and to be that introduction of sorts…and in my opinion, that’s where you’d wanna find it in whatever that next chapter of its journey would be, know what I mean?  ”Welcome To The Hell” is clearly the beginning, but it also hints at & implies that there is more to this story to come.  So you know…whether it ends up being supported by visuals, or simply more to this tale to follow, “Welcome To The Hell” feels like it’s almost incomplete on a conceptual level for the moment without whatever that something IS, making it a bit harder to justify as a stand-alone single on its own.  Is it well-played & well-performed?  Sure!  Of course it is – nasmore wouldn’t put out anything any other way…you can always expect quality in this dude’s tunes, and you get that here on “Welcome To The Hell” without question.  The backing vocals and overall definition in this single is superb stuff.  As I understand it, nasmore & his crew were going for something that would sound like the Devil himself putting on a rock-show…and in that respect, it’s impossible to not hear the success of this idea come to life.  Now it’s just a matter of putting the song in its best position it can be to make an impact online, or in the commercial realm, to succeed with the masses & reach the audience it should…and I suspect “Welcome To The Hell” might need a bit more to the story this time around, at least in the visual sense, in order to generate the maximum effect outta the potential in his latest single.

Find out more about nasmore & stream his music from the links below!