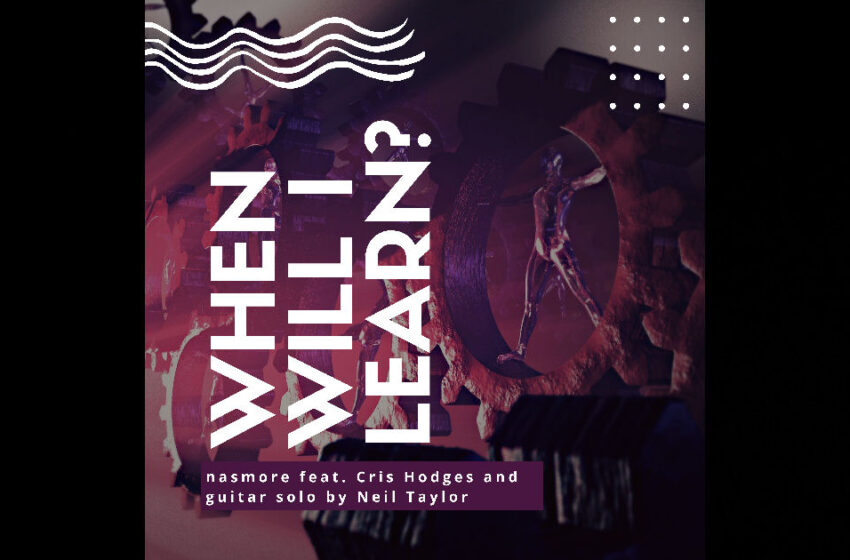 Alrighty nasmore…let’s have this one out here.  All-in-all, there are lots of positives to be found within this set of 2-for-1 singles, a full-scale production of “When Will I Learn” with guest stars, and like the last time we’d featured nasmore’s music on our pages for the single “Safe In My Dreams,” we’ve got a separate version that is also narrated with a Spoken Word storyline too.  Ultimately, while I think there’s a bit more of an uneven balance in this particular release for our Canadian brother here, what I found on the positive side of it all was like, really damn good…I’m just wondering about how the rest of y’all will take this one in I suppose.  It’ll be interesting to see what kind of impact this single ends up making.

So!  The original single, “When Will I Learn,” which features a fairly regular collaborator with nasmore in singer Cris Hodges, and a guest-star on the ol’ axe in Neil Taylor, instantly SOUNDS like a massive production, right from the drop as those drums pour beats into the mix.  From there, I struggle a bit for the next thirty seconds or so through the opening verse…but I’m not saying that I’m everyone – YOU might very well love what you hear, and if ya did, I certainly wouldn’t blame you – I’d be the first to give ya a high-five.  Performance-wise, the quality is absolutely there – in fact, I’d readily concede that Cris Hodges might be at the best I’ve heard him when it comes to the consistency in his performance and the tone of his voice – and for real, this dude has always rocked a mic with full confidence in everything I’ve heard from him in the past, so that’s truly saying something.  Anyhow.  I suppose the concern for me, is that we’re potentially shifting past the sound of drama and intensity, into what could potentially be perceived as melodrama – make sense?  “When Will I Learn” becomes very performance-minded and theatrical…not necessarily negative aspects at all, it just depends on what ya like.  Think of it like the difference between liking Appetite For Destruction versus the Use Your Illusion records…that’s the same band in Guns N’ Roses of course, but completely different results as far as their audience is concerned.  Now…personally, I actually leaned heavily towards the Use Your Illusion set and have no use whatsoever for Appetite…though I don’t listen to that band at all anymore & haven’t for years…they just don’t feel as organic & real to me as I tend to seek out in the music I listen to.  While a track like “When Will I Learn” doesn’t come from that era, I suppose the trepidation on my part comes from hearing how much it’s drawing from that time, as opposed to pushing nasmore’s music further into the modern-day vibe.  Like I said, there ain’t nothing WRONG with going the direction he’s going – there are legions, scores, and millions of fans around the globe that dig on that kind of stuff still to this very day that you’re reading this right now, whenever that may be.  Neil Taylor, who is nothing short of remarkable in the way he plays guitar, also lends himself to that stylistic aspect of “When Will I Learn” as well – so we have to conclude that, in terms of vision, focus, and execution – everyone was on the same page as to what our buddy nasmore was going for with this tune.  As far as nasmore himself is concerned, I’m sure that he’d be the first to tell ya that the 80s/90s Rock influence is an aspect that has shown up in his music at least a few times in the past, though for the most part, he remains a versatile mystery from track to track.  I’m not even all that sure that nasmore fully knows what kind of artist he wants to be defined as at this point in time – and perhaps in the long run, it’ll be that diversity in his sound that becomes what truly defines his catalog.  I think for me, when it comes to “When Will I Learn,” what remained the most impressive aspect above all others was the production and the consistency in the quality of the performances by everyone onboard – everything SOUNDS spectacular, it’s just a matter of whether or not you dig the vibe, you follow me?  I’ll readily tell ya that the hooks work for sure – I felt like they got every ounce out of the chorus in this tune, and no matter what you might feel about the song as a whole, you’re pretty much bound to dig on that part of this song and have the chorus stuck in your head for days on end.  There’s always value in that – it’s the real highlight of this song for sure, or at the very least, beyond the incredible guitar tones & solos from Neil, or the spectacular sound of the drums.  Lots of great individual elements, excellent combined performance even – just not my favorite tune I guess.

I do like the theme of karma and how it plays a significant role in both versions of this track, the original & the Spoken Word narration.  I wasn’t really expecting to have any issues with the narrated version, because that’s usually my kind of jam…I’m a Spoken Word fan when it comes right down to it – but I felt like this one might have been rushed a little bit in this spin on “When Will I Learn.”  Production-wise, the music takes such a backseat role it’s like you’d find it in a stretch limo…it’s that far away from being the driving factor, and in my opinion, set way too far off in the distance.  I also think that the performance in the narration somewhat took its cues from the original, or vice-versa – because that melodramatic feeling was…hmm…all too noticeable here.  Storyline-wise, it’s aces – that part I thought worked brilliantly, and nasmore deserves major credit for that…this dude is clearly capable of clever writing, and I’d be first in line to buy his book if/when he ever chooses to write one.  He uses extremely vivid descriptions, and a selection of words that practically makes me jealous!  You get the point – the dude can write, and he’s got a whole second career as an author waiting for him whenever he wants to pursue it.  As far as this particular situation is concerned though…that’s where things almost get a little weird in the ‘what’ of ‘what’ we’re listening to – the music is set so far off in the distance, that “When Will I Learn” in its narrated form felt like it didn’t need the music at all, you follow me?  This felt a lot more like story time…and while I’m personally cool with that, it seemed almost misleading to have these two things tied together as loosely as they were.  Spoken Word is one thing, and Spoken Word WITH music is a whole other animal…ideally, you want there to be some kind of correlation, where the words work in tandem with the music & vice versa…and that seemed to be missing here in my opinion.  Big wins in the storyline & details for sure, but I wasn’t as much of a fan of the way this came out performance-wise in comparison to the last time we experienced a Spoken Word tune from nasmore on “Safe In My Dreams” back in the middle of summer.  It’s always a tough aspect of that whole genre in general…if you don’t love the performance, it becomes much harder to separate that from the words – the dude speaking is clearly a professional…I can hear that…but I didn’t hear the connection to the material like I felt was present on “Safe In My Dreams” from earlier this year.  All-in-all, like I said from the start…the results here might be a bit more uneven from nasmore this time around, or at the very least, perhaps heading into more stylistically niche terrain than he has in the past so far.  None of that is wrong, none of that makes this a bad move, or any kind of a waste of time creatively whatsoever – it simply might appeal to a narrower audience, which can happen from time to time as we test the waters.

Find out more about nasmore at the official pages below!