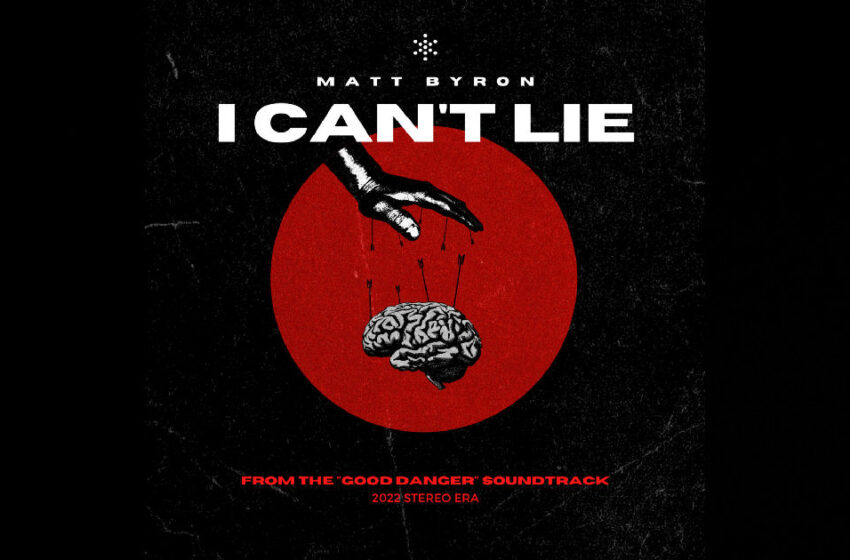 Fuck crypto currency, life shit, and anything else that’s been keepin’ this dude from makin’ his music like he should be…it’s been far too long since Matt Byron’s been in action.  Last time we had the man on our pages was just short of FIVE years ago now, back when he released “Fight Song” in 2017.  We don’t end up reviewing EVERYTHING all you wonderful bands & artists put out there…so don’t get me wrong, he’s put out a few cuts since then…but even in that regard, the last you’ll find online dates way back to 2019.

So yep…it’s time Matt.  It’s long past time.  But you know that.  Glad to have you back brother-man.

Seems like “I Can’t Lie” either…and the older I get the less willing I am to hold anything back these days.

Love the artwork for this single…that much I can tell ya straight off the top – that’s some genuinely thought-provoking imagery right there, and definitely the kind of visuals that easily get me completely interested in what I’d be listening to.  Matt’s gone with a BEEFY cut for “I Can’t Lie” by comparison to what I’ve heard from the man in the past…and sure, if a dude’s gonna take that much of a time-out, it’s great to have him come back sounding this intense, confident, fired-up, and fully ready to rock.  Guitars are solid, drums are too…the synth hooks steal the show…the vocals are really well done and sung with hard-hitting melodic dynamics that suit the strength of the seriousness in the atmosphere, aura, and vibe of a track like “I Can’t Lie,” and the lyrics are compelling in a way that pairs well with the single’s artwork.  No doubt that it’s an angsty sound at work here…but Matt’s played this track with real intent & purpose – which is good…he knows us critics are out there just waiting to pounce on giant extended absences, and there’s a whole bunch of people that would like to poke holes in any boat that’s been adrift for far too long.

If you’re making that comeback y’all…take a page out of Byron’s playbook here, and make sure that when you do, you give us as precious little to complain about.  Performance-wise, I think he should be very proud of how this cut came out and how we can practically feel all the sweat, spit, and effort that comes along with making it.  Chances are, you haven’t heard Matt as amped-up as you’ll hear him on “I Can’t Lie” – because I don’t know that he’s quite reached this level of intensity in the past, whether you consider the punch & power in the mix of the music, the performance he puts into the microphone, or the more aggressive vibe overall.  I’m not here to tell ya that this makes “I Can’t Lie” the best cut in his catalog…I’m sure that’s always going to be more up for debate when it comes to the writing & whatnot – but in terms of how things sound and what HE is putting into his music…no doubt he’s leveled up here.

The hooks themselves are strong…enough…I’ll go with that.  Fairly evenly spread across the board really, I don’t wanna take anything away from the verses/chorus and what the vocals provide, but there’s no question that fundamentally, a lot of what you’ll find in the music itself can rival what you’ll find there.  To me, the largest hook of all in a track like “I Can’t Lie” is well-beyond the writing or any one particular sound that you’ll hear…it’s the energy & the inspired performance at work – that’s pure gold on this cut.  Byron himself is stronger than the material might be to many listening out there…I’m not gonna be the guy to tell ya that “I Can’t Lie” is radically different from stuff you might have heard out there in music’s history, or even his own catalog at the roots of his chosen style – but I have no problem whatsoever confirming & telling you that this is the sound of Matt x10 compared to what you probably know from the guy & what you’ve heard from him in the past.  That’s evolution baby!  And that’s a damn good thing to be able to hear in anyone’s music if you’re asking these ears of mine.

Released on his very own label at the ol’ homestead of Stereo Era Records, from the upcoming soundtrack to Good Danger…of which…well…I actually have no idea if that’s a movie or short film being released in tandem or just one heckin’ clever title…but those are the details that I’ve got for ya.  Other than that…other than what I’ve already told ya so far…what I can say is this – the man’s becoming one major beast of a studio warrior when he sets his mind to making music…the mix on “I Can’t Lie” and his use of audible dynamics from the lefts to the rights is something you can’t help but notice…and admire.

It’s awesome to have this guy back in action, kickin’ ass, and making music like he was truly meant to be.

Find out more about Matt Byron from the official pages below!