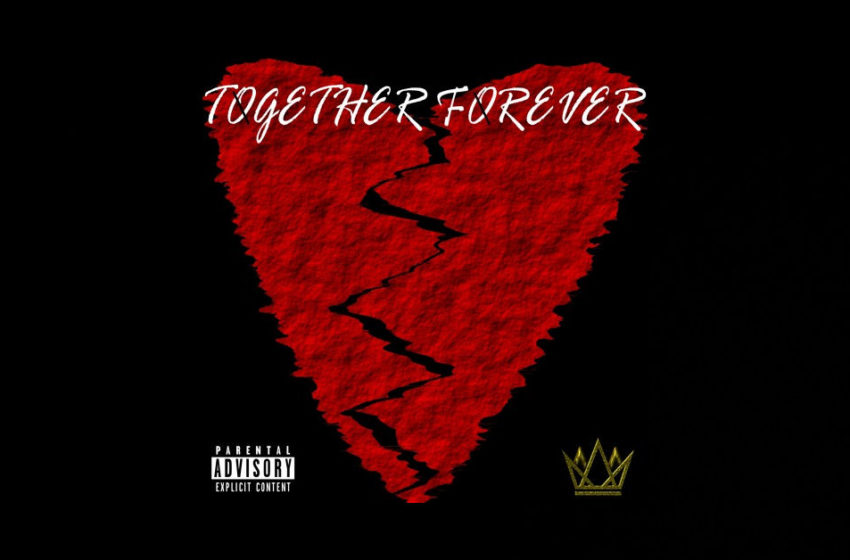 With about three years or more of listening to the King’s music under my belt at this point in time, having reviewed his cuts all the way back to 2017, and twice in 2019 in the thick of his resurgence – he knows I’m always gonna give it to him straight-up and tell it like it is.  Back in 2020 with a couple new tracks, King Cotz is on his grind good’n’proper, as he should be – if you follow along with the man’s pages you know full well he’s always cookin’ up somethin’ in the kitchen for ya, and he’s never away for long.  If he’s quiet, trust me, he’s just busy, hard at work, doin’ what he does, immersed in the craft he loves and has dedicated himself to over the past several years.  We’ve experienced the beginnings, we’ve experienced the refinement, & we’re here today to experience what he’s got goin’ on right now.

So here’s where I’m at with two of his latest singles…I wouldn’t go as far as to say he’s in “TROUBLE” this time around, but sure, like always with most artists & bands, I’ve got a few things for him to consider.  I’m gonna start with his latest joint, which is “TROUBLE.”   I’m comin’ at it like this for a reason; if I go at it this way I can leave you on a high-note & more positives with his single “Together Forever” right after.

We can get caught up in the current sometimes.  I’ve always said that, any time I hear from an artist or band I wanna hear that their new single is the best thing they’ve ever done, whether it’s true or not.  It’s my job to slice things up critically…but when you’re making your music, hell, I’d only hope you’d be excited about what’s happening in the present & that you’re feeling like it’s your best work.  Remember – it’s generally only in hindsight and reflection on a whole catalog over time that we tend to find out differently.  Enthusiasm is what generally ends up sending a lot of the music that comes our way here at sleepingbagstudios…and I’d be the last person to ever want to discourage an artist or band with anything I say…I’m objective, yes, but I’m also just another person with an opinion at the end of the day.  You can see from the release date that “TROUBLE” is fresh out the box, recently unpacked and loaded up onto the internet nearly a week ago at the time of writing this.  New releases come our way plenty, of course – but make no mistake, it’s generally still the enthusiasm behind’em that drive’em to us – you wanna keep that buzz rolling & the promo happenin’ and all that good stuff…and I can’t say I blame ya. 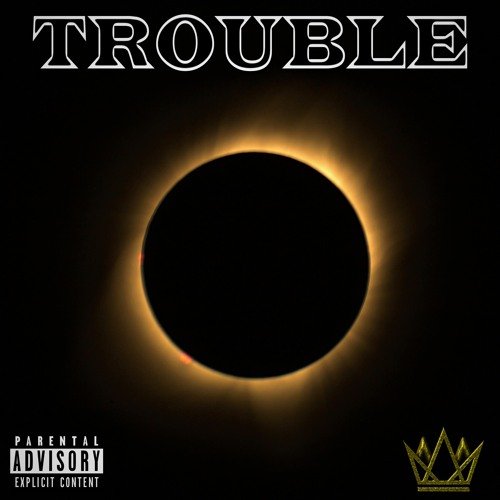 In the whirlwind of the intensity of the creative process, it can actually be a significant amount of time before we get the opportunity to stand back from our work and examine it critically ourselves – and as artists, it’s our duty & proud responsibility to continually learn and evolve for the sake of the art itself.  Over the years to follow, I think King Cotz will likely look back on “TROUBLE” and take cues that could considerably play a massive role in how he takes it to his bars in the future.  The meat & the potatoes of the situation is this…lyrically, he’s doin’ alright here…I don’t find any massive issues…I felt like the write-up in the description where it’s posted might be seeking out to justify its theme a bit retroactively perhaps, but the words themselves were solid enough.  I think it’s much more of a personal cut than it is a track that examines things on a societal-level, but that could just be me.  Flow-wise, I’m not super crazy about the main hook or the use of the word “TROUBLE” itself…it’s…well…it’s just an awkward word…and sometimes it seems to fit right in, others it seems to give KC…well…”TROUBLE” I suppose.  But even that, I’m cool with at the end of the day…I think he’s got a couple of seriously questionable bars towards the end of this cut that attempt to mangle his timing & metering…but you could potentially argue he’s simply switching it up and I wouldn’t fight ya on that either.  Where that next-level King Cotz is seeking is in the tone of his voice and really finding a way to make that work in a dynamic way that has the music complementing his words, and vice-versa.  Here’s what I’m saying…if you listen to “TROUBLE,” you’re bound to notice that KC is rocking with essentially one strong tone the entire time – the variations don’t occur in the tone, they occur in the volume of his projection – and he’s gonna have to really examine if that’s actually enough to keep the people entertained.  I look at it this way – no instrument would get away with it.  If you had a guitar or a bass that kept at one note and only one note throughout an entire song, you’d feel it grate on you over time, because there’s a repetitive nature to the sound itself.  Whether you increase or decrease the volume of that instrument, it’s still gonna come out with that sameness & similarity to every moment that rolls by…vocals live & die by those same standards, it don’t matter if it’s rappin’ or singin’ – the same rules apply.  You want that personality to come alive…King Cotz has got a great one; he just needs to find a method to really let it shine in his voice.  With the amount of words he writes into a song, there’s no doubt that the focus is heavy on the lyricism…and that’s fine; take that positive & keep building on it…rehearse, practice, rehearse, practice, over & over until those words are second nature and come naturally…because once they do, that’s when the personality really comes into play.  KC’s got a long list of his favorite emcees I’m sure…and the best advice I can give to him is to really go back and pick’em apart…have a listen to not just what they’re saying, but how they’re saying it, and really get into how they flex their tone to create the dynamics that hook us all in as listeners.  King Cotz can certainly string an impressive amount of words together, there’s no question about that and “TROUBLE” is no exception to the high standard he’s set for himself in the past when it comes to the lyrical aspect.  I ain’t gonna lie to the man, I think he needs more here than what he’s got goin’ on with this latest single – but as always, I remain in his corner and have confidence he’ll get there.  Brick by brick homie…it’s all about adding pieces over time.

I know, I know…I get right into these reviews…maybe too far into’em; people out there are just trying to make music & enjoy themselves, and I gotta be so stupid-serious all the time…I get it, I get it.  I suppose I just take my cues from the artists & bands we tend to work with multiple times over the years…dudes like King Cotz are always doin’ whatever they can to improve and continue to evolve in their work; I don’t claim to ever have THE answer, just advice that may/may-not help.  So if it seems like I’ve got less to say about “Together Forever,” that’s likely only because there’s less to advise KC on by comparison – I think he’s got a solid & single-worthy cut with this track, and I’d have no problem putting it right up there with the best in his catalog.  King Cotz puts on a more balanced performance throughout this song, which was released about two months prior to “TROUBLE.”  You could probably cite several reasons as to why that is…one certainly being, “Together Forever” is an extremely personal track, based on real-life love, loss, and heartbreak…and that personal investment on KC’s behalf leads him to a more expressive set of vocals being laid down.  There’s still an element of that sameness in his tone, but there’s no question he gets more out of himself here, and likely that’s due to the closeness of the material he’s written…he’s attached to these words, and as a result, this experience becomes seriously real to us as listeners.  And hey, I mean, again…if I think he’s got slighty more to give – and he does – it doesn’t mean I ain’t still loving what I hear.  I’m willing to be one of the people out there pushing him towards taking it to the limit & beyond.  I also think that, along with the sample used for the chorus, he’s given himself more opportunities to be heard by using more dynamics in the music he’s working with – and at the core of “Together Forever,” you’ll find an incredibly gripping & intensely emotional vibe that could damn well bring a tear or two to your eyes as you listen.  I’m 100% in love with the sample he’s used for the hooks of the chorus – and even though he might not take the lead at that particular moment in time, give the man credit, because you can hear King Cotz backing it up with vocals of his own, singing it out…and it’s impressive.  I think it was a really smart move…he makes a real impact with this entire vibe…the aura surrounding “Together Forever” looms heavy like a shadow or a cloud overhead…but man does he hit home with this melancholy melody he’s latched onto here.  Sometimes it just takes that right track to bring out the best in an artist…I can hear all kinds of positives on “Together Forever,” despite the subject matter being purely devastating – King Cotz’s heart might be broken and in pieces throughout the emotions, thoughts, and feelings he’s spillin’ into the mic on this single – but he should have plenty to smile about in the results of turning personal tragedy into real art.  It’s a tough track to listen to as King Cotz gets his whole heart ripped straight outta his chest…but for such a heavy theme, you’ll be surprised how many times you’ll spin this cut & how addictive it really is.

While we tend to dwell on the negatives…and in a 50/50 split like this between two singles, chances are that’s a possibility for King Cotz as he reads through this…I’ll take a moment here to remind him of his own words…the ones that accompany “Together Forever” that read:  “Sometimes things happen for a reason – you just gotta learn from it and move on.”  He’s right.  That’s true in life & love, and certainly in music as well; we’re all students of the game…it’s all about leveling-up for sure, but the learning MUST continue at all costs, no matter what we’ve accomplished in the past, there’s always more to be conquered.  Artists like King Cotz fully understand this…and that’s why I never stop believing in this guy.

Find out more about King Cotz at his official homepage at:  https://kingcotz.com