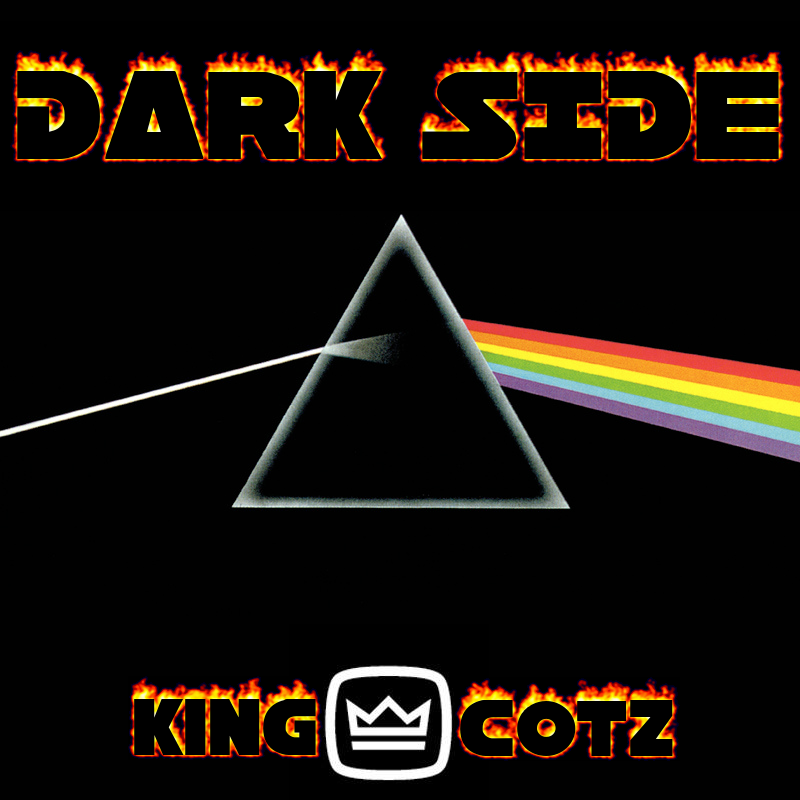 You know…the thing about Trap music is that there sure can be a gigantic amount of words involved…sometimes I have to scratch my head & wonder where these emcees even find the time to take a breath!  King Cotz out of Richmond, VA, definitely gets lost in the moment and audibly feels the rhythm & rhymes he spits out…right into the character to the point where the lines of his own facts & fiction no doubt become blurry.  As King Cotz, this dude is commanding some gigantic & behemoth beats…and while I think you can tell this is a project that’s still on its way to being all that it will eventually become, undoubtedly, he’s got a good start here.

I mean…he had me from the moment the Jack Nicolson sample from Batman began on “Dark Side”…I was interested immediately.  I’ve got a Batman tattoo…I come by this knowledge honestly, don’t judge me…

From there “Dark Side” goes on to reveal enormous low-end depth and seriously impressive production from Josh Petruccio to rein-in the huge swells of sound perfectly into the mix.  As far as King Cotz goes…there’s a bit of mixed-results that you can hear on “Dark Side” that you’ll also hear within some of these other singles in review here today.  On the positive-side of the situation and song, King Cotz clearly raps with confidence and can string together complex strings of rhythmic vocals that flow for miles & miles, working really well with the swells, pulses & breakdowns in the beat.  For the most part; if anything…King Cotz might tend to overcomplicate a few lines with extra syllables that have lines tending to wander too far from the beat to feel like they belong.  Best way I can put it/advice I can give on this is that if a set of lines feels tough to ‘get right’ in the studio…chances are we hear those same moments of struggle in the overall result.  If it’s all free-style, then apologies from me…cause King Cotz is definitely bringing the energy and does blaze through an impressive amount of words that sync-up right where they should be; if it’s pre-written & rehearsed rhymes…I’d say to King Cotz direct that he MUST be able to recognize the difference between those moments where the metering & flow is right on-point versus the points where he has a harder time fitting in every word as he practices & refines these cuts.  I say MUST because you can hear the energy hit him in “Dark Side” when the flow is hitting the beat syllable-by-syllable and right in-stride…and I’m confident as a performer/writer he’d have to know where these moments are occurring that break-up the flow – the key becomes writing or rewriting them out.  It’s not as easy as you’d think…writers of all-kinds get severely committed to their words; sometimes re-phrasing a bar or two to make that flow become even more natural is all a rhyme like this needs.

King Cotz has definitely played it smart in the surrounding talent he’s enlisted to assist him in bringing these rhymes to the surface.  “Dream” is produced solidly by Manny Made It…it’s got a really crisp & clear beat with more enormous low-end that’s perfectly harnessed into the atmosphere.  The comments on the metering on “Dark Side” still apply here on “Dream” as well at times…BUT…I admire the confidence that King Cotz is bringing to the mic.  In all honesty, some of these spots that are overcrowded by a syllable or two are almost fit in through the effort made by KC…close but still just a bit overshot to the point we can hear that strain to get it all in there.  And don’t get me wrong…not picking on this emcee whatsoever – I think there’s mad potential here; the point I’m trying to make is that he’s getting it right so much of the time that he’s gotta start picking up on those last pieces of the puzzle to go from good to great…and that all starts with really nailing 100% of that flow, all the time.  Right now as it stands, on songs like “Dark Side” or “Dream” are great ideas intact – they just need a bit of tweaking lyrically to make the performances come out more natural and smooth in the tiny fractions of these tracks that shoot just wide of the mark on the occasional bar.  To be clear…if I was King Cotz I certainly wouldn’t be unhappy with these performances…again, if anything, he’s asking too much of himself by trying to fit in…like…ALL the words out there at once – but for the most part he’s right in the flow, in the moment and spitting with confidence.  Music has been completely on-point for both these two cuts – King Cotz definitely understands the sound he’s looking to rap over and is making incredibly smart choices when it comes to the beats he works with.

He might use an odd hook to fuel the chorus of “Fated” – but at least he’s willing to take it on his own.  I always dig it when an emcee attacks the singing-hook in a song…chances are, they’ve got strengths in one area more than the other; but I always appreciate the attempt.  Plus King Cotz knows that when it comes to a hip-hop vibe like “Fated,” keeping it loose & keeping it real might just lead to the best results – and I’d argue that it did here.  He might rhyme about smoking broccoli…hell – he might even be rapping fully-blasted out of his melon for all I know – BUT…King Cotz is right on-beat where he should be throughout the entire rap in this cut.  So again…not to toot my own horn here…but that’s the evidence you need right there to support the fact that SOMEWHERE in there, KC absolutely knows when he’s getting it right – know what I’m saying?  King Cotz…I’m talking to you direct here…you can feel the difference in the flow here…I know you can.  You’re not stretching for a single syllable and got the lyrics right in line to get your very best out.  Whether people out there will dig the main-hook…harder to say on this track; with multiple listens I felt like I accepted it more…still a bit of an awkward fit though.  Bottom line for me is that it made all the difference in the world to have King Cotz hit that beat as tightly as he did with the words here…of the three cuts I’d experienced to this point, that smoothness made it easier to accept “Fated” as a listener than how we’d occasionally been snapped out of the rhythm & flow slightly like we’d been in the first two singles.  I’ll take a weird hook any day of the week when it comes to making that trade…and I dig the bright rhythm of the music & beat produced by OBProducer; it’s a much lighter atmosphere overall but also notably much more of a Hip-Hop track than a Trap cut.

Last cut I’ve got here is produced by Monir, a track called “Mad World.”  Also on the Hip-Hop end of rap’s spectrum – I think King Cotz has gotta acknowledge the fact that he’s fitting right into the vibe of these final two tracks better than the first and examine where his sound/style work best.  I think the Trap efforts of the first two-tracks showed an emcee trying to bend his style into a newer genre – and I think how well he naturally fits into a Hip-Hop groove like “Mad World” or “Fated” put his approach in the right arena to succeed.  There’s a bit more freedom and expression in his tone and energy…like King Cotz has just puffed & passed and the pressure’s off his shoulders…and I think that smoothness in the vibe works in his favor on “Mad World.”  Another solid beat/sample combo to work with that’s perhaps lighter & more widely accessible than any we’ve heard from this emcee so far thanks to that silky-smooth guitar-hook on repeat – KC brings the attitude to the mic and delivers the flow perfectly & precisely intact, word-for-word.  The words themselves…probably my favorite from the set of four…a bit more real, observational and socially aware…”Mad World” goes from beyond King Cotz’s own personal realm and into material & subjects that people can relate to more closely.

King Cotz might have some decisions to make in terms of where he’ll want to take his sound in the future and what style works best for him personally…but hey, it’s nice to have options like that.  You can hear the hunger, interest and passion for rhymes are here – and that kind of drive can account for a ton when it comes to growth from track-to-track and album-to-album.  I think King Cotz has got a good thing going so far and skills that are pretty damn sharp; they’re only going to get sharper & sharper over experience & time and I’d be willing to bet there ain’t nothing out there gonna stop this emcee from refining his game to perfection…I can hear the determination in this guy and I dig that.