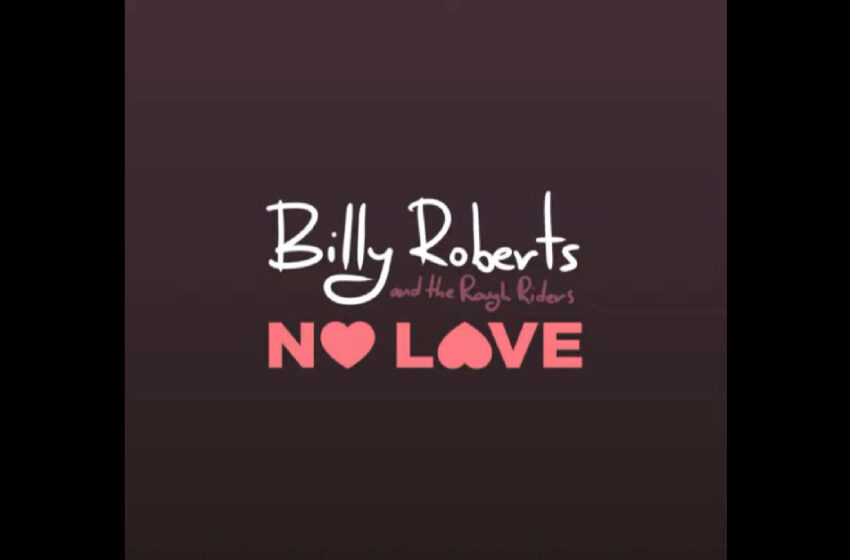 Billy Roberts And The Rough Riders – “No Love” – Single Review

If you think about your own collection of artists & bands that you’ve followed throughout the years of your life, chances are you know exactly what I’m talking about when I say that the good ones always find their way to a time where you practically stop questioning every move they’ll make next.  You know what I mean?  It’s not every band or artist that’ll get to that point mind you – but some…the rare ones that truly dial right into their sound or seize the inspiration of a new style for a series of records…you can hear both the passion and the fact that they’ve found their way to where they belonged all along.  If you’ve been reading the reviews I’ve posted here this very year in 2020 about Billy Roberts And The Rough Riders, you know that’s exactly where I feel like their latest music is at…and though only the future that can confirm this 100%, I’d be willing to bet we’re in their golden era, right here, right now.

I don’t usually say much about my short-list for our annual competition for the Best New Sound of the year…but I’d be hella surprised not to find Billy Roberts And The Rough Riders on it by the time it gets put out in early December…I feel like we’re close enough now to declare that a likely certainty.  From the moment the list gets put out in one year, the list for the next begins – and I’ve had their album called The Southern Sessions sitting atop that special page of names since its release in January.  Believe it or not, there are actually still four other names that are listed as potential contenders above Wild Bill & his crew…but here’s the insider secret – Billy Roberts And The Rough Riders are the first ones on that list in big beautiful BOLD letters.  There are albums I consider, like those top four…but like they say, when you know, you know – and when that’s the case, you get the BOLD treatment.  Sure there can be a dogfight at the end of inspired years out there where there are more than ten BOLD contenders that have to be sorted through…but at the end of the day, any record on that list is ultimately bulletproof.  The real point I suppose…is that there is already more than a ton of evidence out there between the previous single “Today” from the summer and The Southern Sessions at the beginning of the year to support my theory – Billy Roberts And The Rough Riders are making real magic in 2020; it’s undeniable.

Joining Wild Bill to keep the subtle & sweet hot-streak going strong, are Rough Riders Sophia McCarthy in the backing vocals and Tanner Lindsey handling the guitars, instrumentation, and production for the new single “No Love.”  True to what’s been happening this year with Billy Roberts And The Rough Riders, “No Love” takes a delicate & gentle approach, and yields spectacularly mesmerizing & fascinating results in the process.  Credit to this collaboration for sure – I’d have a real hard time trying to pick out who the star of the show is when it comes to the strength of the balance in what you’ll find on their new song – “No Love” has exceptionally beautiful vocals & melody, highly expressive & vividly colorful musicianship, and execution that shows equal parts talent, focus, and sincerity.  I’d be fairly inclined to go with the addition of the trumpets added into this tune if someone was to back me into a corner and demand that I pick my favorite piece of this song – I think that’s the most definable spark that seems to raise the stakes for the energy in everything surrounding it when it shows up – but there’s zero doubt about the fact that everything you’ll hear plays a complementary role in harmony with each layer of “No Love.”  I’ll admit…after hearing Mighty Mage’s Ancient Scrolls II this month, that dude sent me into a storm of listening to the whole Beirut catalog again…I know I’m in the mood for instrumentation & compositions that have much more flavor & character than the usual standards right now – so when those trumpets showed up in the great reveal of the structure & design of “No Love,” believe me, I was all in right there.

What I wouldn’t want you to leave here with though, is the impression that I wasn’t loving this song from moment one, which I have been.  “No Love” Wild Bill?  Respectfully sir, I’ve got ALL the love for “No Love” – and I know I won’t be alone in that.  Listen to the sparklingly sweet guitar notes start this up…listen to the brilliantly humble, natural, and enticing way that Billy sings…listen to the essential contributions that Sophia makes in strengthening the harmonies into such a refined audio delicacy – and then of course, make sure to notice how “No Love” continues to build & liven-up as it plays, with skilled musicianship that cleverly surrounds you in-full, long before you’d even realize it.  All of a sudden, you’re in the thick of it all…in the middle of a song called “No Love” that sounds like love defined…and sure, there’s an irony in that, intentional or not.  This tune really sneaks up on you though…I think the design & flow are sensational when it comes to how this single develops and reveals the many factors that lead it to complete success; piece by piece, Billy Roberts And The Rough Riders add to the experience of “No Love” and give you MORE inside of a song where you both wouldn’t expect it to begin with, and in a way where it feels incredibly organic, inviting, natural, and entirely unforced.  Some people say we’re born with songs inside of us, just waiting for their moment to come out – this is what that sounds like to me.

If you’ve been on the ride I’ve been on with Billy Roberts And The Rough Riders over these past several years, you’ve likely been every bit as impressed as I’ve been with the evolution in this artist & his band.  I think for a dude that many might have thought at first could turn out to be yet another Rocker out there & stick to a certain script, Billy Roberts has found extraordinary ways to evolve as an artist & bring so much more to his music, year after year, time after time.  Whether it’s the smart contrast of lyricism that he’ll bring to songs like “No Love” and the authentic imagery & emotion he puts into his words, the way he’s continued to surround himself with talented musicians that bring out the best in him & vice-versa, or the writing, structure, and sound of his latest material – there’s just no possible way anyone else out there could hear it any otherwise; this dude has locked right in to what he’s capable of creating.  From the stunning solos at the heart of “No Love,” to the full-strength of the gentle sweetness in the harmonies, to the entirely appealing & alluring design of the songwriting itself and how this single comes together so quickly with endearing sound & style…trying to find faults in a flawless design ain’t where I’m at folks, know what I mean?  Like I’ve been saying…when you know, you know…”No Love” is another stellar contribution to what’s been a highlight year for Billy Roberts And The Rough Riders; it’s absolutely further confirmation of just how dialed-in, focused, & captivating they are at their very best.

Billy Roberts And The Rough Riders have been making excellent music from day one, and it definitely keeps on gettin’ better.  To prove any/all of what’s been said, claimed, and exclaimed in this review today, please feel free to independently verify this information to be 100% factual by having a listen with the two ears on your face at Spotify:  https://open.spotify.com/artist/1wC8JHZE7uERUK1qajiL4e