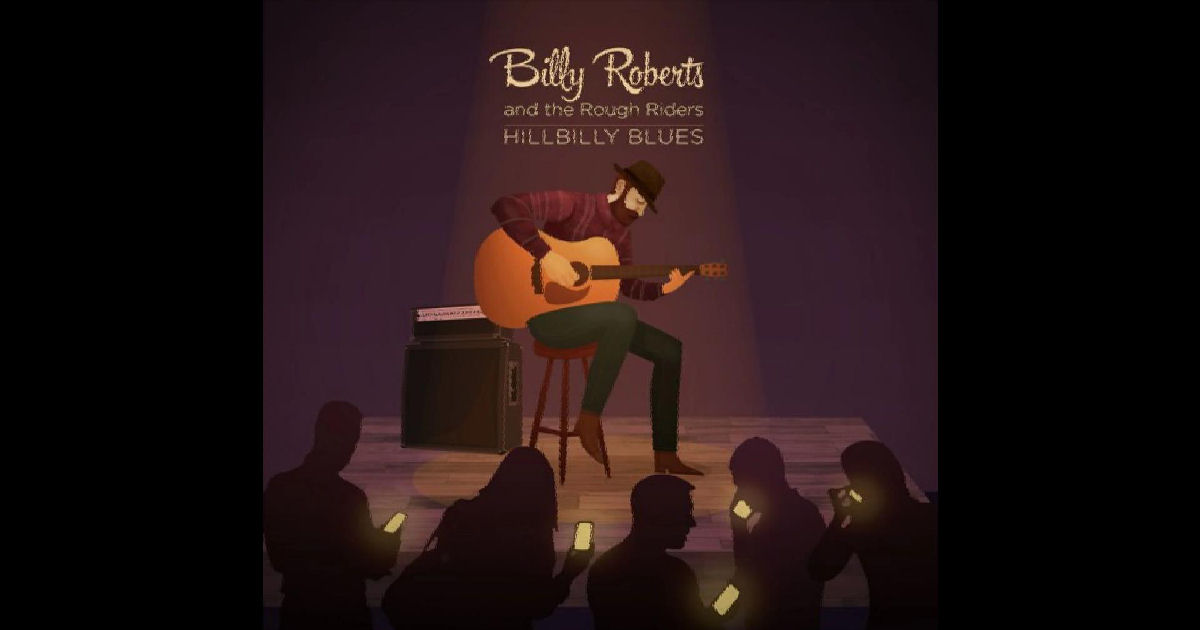 Life post-Greenbah already!  I tell ya…Billy Roberts And The Rough Riders never seem to sleep.  Since first listening to the Australia-based band’s album The Last Of The Originals in 2014, I’ve almost lost count of how many times I’ve reviewed them since.  It’s a fact, you can look it up here at the site for yourself or poke any of the links you see when you find the name of Billy Roberts And The Rough Riders in this very article…you’ll see that, not only are they a band we’ve covered extensively over these past four years, but you’ll come to appreciate that they’ve given us all every reason to keep on listening.

Whether it’s been for quality or sheer quantity – this crew has been humbly outworking the rest in multiple ways.  For while Wild Bill would try to convince you this is just a group of dudes that dig on jamming together every once in a while, the results also show that Billy Roberts And The Rough Riders are likely in the top ten percent of bands/artists out there when it comes to putting out new stuff from year to year.  Not just here either mind you – seriously, have a quick search of Billy Roberts And The Rough Riders on Google and you’ll see the band is just about everywhere you could possibly find them online.  Like they’re even on the AllMusic site, which I’ve personally used as a reliable resource for music information since…since like…I dunno, about the time that the internet started?  But you name it…Deezer, iTunes, Spotify, Soundcloud – even Huffington Post and our friends over at Stereo Stickman as well…and just about a million other places online from what the search results will find…believe me, this band IS out there – and the people are catching on to their sound for plenty of good reasons.

And it’s in knowing all this, that one of the lines at the beginning of the new single “HillBilly Blues” will likely catch your attention for the perhaps intentional, maybe unintentional irony, of when he sings ‘no one wants to play my songs.’  Clearly with the number of songs and records he’s put out in the short time we’ve been listening since 2014 there’s no shortage of people willing to make music with the man – and from the stunning number of places out there online that have Billy Roberts And The Rough Riders on their charts & sites…well…it’s pretty safe to say that if he was referring to people listening in that quote from “HillBilly Blues” above, that there are certainly plenty of those out there as well.  People are in fact playing these songs…willingly as well as far as I can tell, I haven’t seen no hostage videos as of yet, so for now, I rest my case.

I’d also surmise that “HillBilly Blues” will serve its purpose well in getting people stoked about whatever it is they’re putting together over there now.  A tight track all-around, Billy Roberts And The Rough Riders pick up featured guests Alex Quinn on the lead guitar and Rory Racione on the drums – both of which bring their A-game to this new single.  Racione keeps everything on course with a steady beat and expert hand on the set, Quinn roams brilliantly and soars with fantastic lead notes that have amazing tone & precision, always finding the way into the space of “HillBilly Blues” to bring life into each bar.  Of all the elements that make “HillBilly Blues” a solid listen, Quinn might very well take the top prize – he really does put a lot of the magic into this cut and his solo moments are outstanding as well.  If it wasn’t for the kickass trumpets playing such an incredible role throughout the music as well, adding such perfect emphasis and punch into the personality of this song, I’d hand the award and hardware to Quinn more readily.  Wild Bill of course, deserves a large share of the credit as well – I dig the way he’s both written his words and performed this one.  Over the years, he’s had some great moments on the mic and this would be another one in the win-column for the man.  Tone & energy-wise, he’s spot-on; you may or may/not catch every single word he says, but like any other singer that approaches a song in that sense, the most important thing becomes that you never let go of the vibe or the melody, and Billy keeps those both firmly intact throughout “HillBilly Blues.”  Each line comes out like a fresh thought that he’s wrestling with or debating out loud, giving the lyrics a poetic & free-flowing freedom that expands into a full range of ideas on display, rhythmically rolling into one.  You get a mix of personal introspection and comments on society; you also get an insightful glimpse into life as a musician and some really smart political moments cleverly woven into the soulful way that Billy sings this new tune.  Production is right on-point, the rhythm-section is firing on all fronts with the bass really feeling this groove and the rhythm guitars taking a role as the unsung hero of this song, acting as the glue that holds it all together in the main melody of the music.  I say hero because they really do take on a large role with the bass & drums in keeping this whole song moving, but also because they’re threaded into the sound so well and played so reliably, that Quinn gets the genuine freedom to assist in taking the music to that next-level with the ever-enticing lead-guitar tones coming in to add serious character to “HillBilly Blues” that all ears are sure to notice.

Certainly no complaints from me about this new cut from Billy Roberts And The Rough Riders – they’ve got a strong single here with tons of appeal from the music to the vocals & the throwback-rock sound/style of this song is executed with a focus and precision that only comes from players really feeling the vibe and getting right into the moment.

He might try to convince ya that ‘no one wants to play my songs’ – but I can tell ya firsthand after listening to “HillBilly Blues” multiple times over…they certainly wanted to play this one .

And it’s because they’re all so into it that you will too.  “HillBilly Blues” is a great new tune from this band and another fine step forward for the music of Billy Roberts And The Rough Riders.