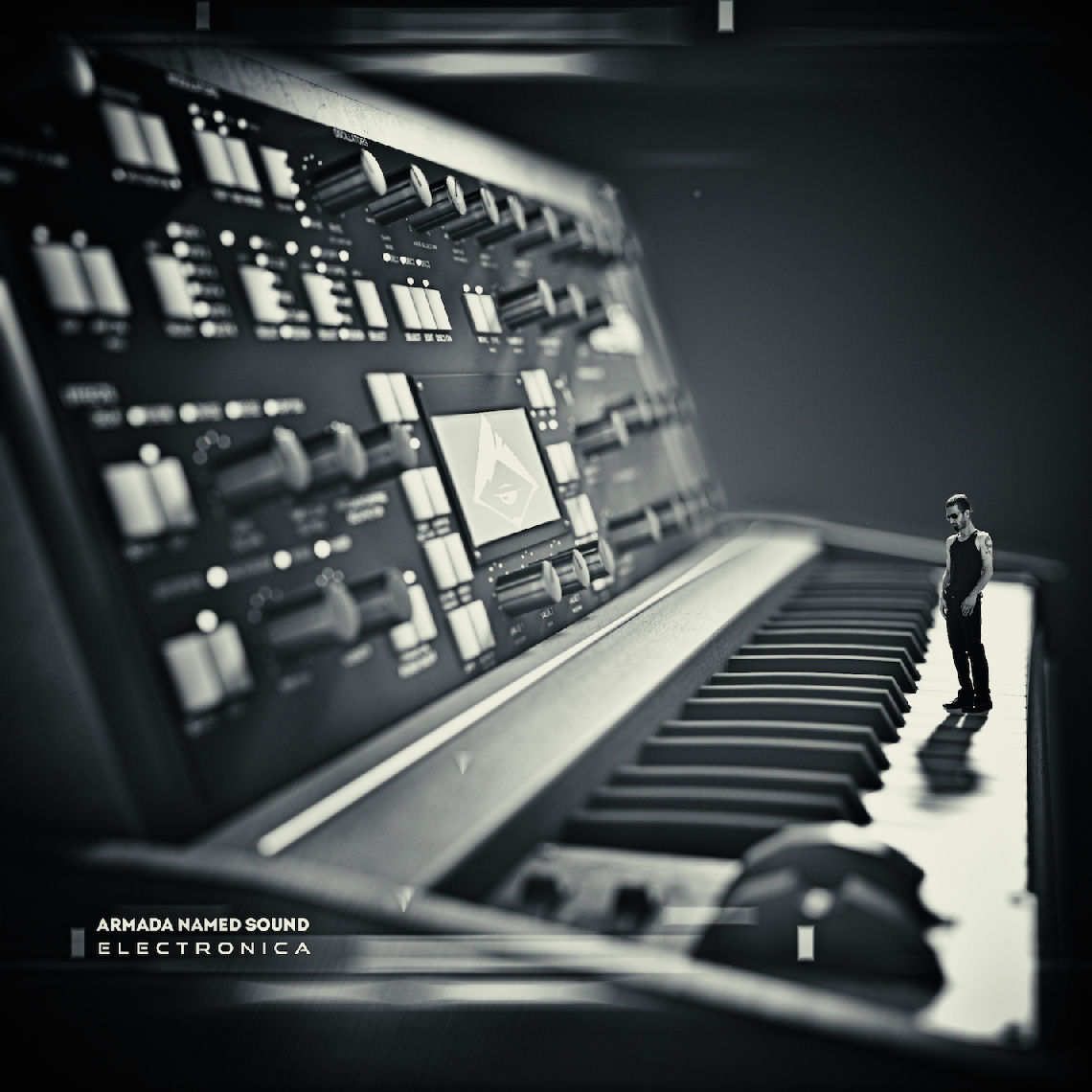 Back instantly with some pep in his step, music-maker…summoner-of-wild-electro-beats and producer Maus of the project Armada Named Sound comes flying out of the gates at high-speed on the first cut “Midnight At Metropolis” from the new album Electronica.  It takes no time at all to realize I’m happy to hear ANS back in the groove; ever reliable as always…you can always count on Maus to create electro with real movement & texture to it in all kinds of creative ways.  With the wild-ride of the electro-percussion leading the charge in “Midnight At Metropolis” and the atmospheric elements of the music finding incredible places to exist, live & breathe throughout the song – you’ve gotta appreciate the inspiring energy that Armada Named Sound is starting the new record with.

Heading into one of the lead-singles from Electronica, you get the first of three vocalists stepping out from the shadows of this murky & menacing idea towards the microphone to lend essential talents to “Crush” as Andromeda S. breaks into the mix.  With a brilliant explosion at the beginning to really kick us into the second song & atmosphere of the record, the transition is a flawless and captivating one to listen to.  Maus outdid himself on this particular composition…the electro-assembly of this song is both stunning & haunting…the sounds & samples stick to you and the layers of vocals completely add to the mystery in the music.  Andromeda S. holds her own bringing rhythm and solid, confident tones to a song that deserved it…”Crush” is a killer cut that really moves in a sleek, sexy & dangerous way that really grabs the attention through its menacing, dark and creative structure and undeniable eerie groove.

“Toxinsane” really caught my ear.  Like a blend, shifting and contrast between light & dark…I felt like this track really represented a lot of what Armada Named Sound is all about overall.  Certainly, if anything, it’s a great mix of the tones, atmospheres and ideas you’ll find on Electronica – “Toxinsane” has a sweet & mystical performance from Marta who brings her best to this one, and once again mix-master-Maus has woven a strong tapestry to pulse alongside her vocals.  There’s fantastic dynamics on “Toxinsane” – the theatrical & passionate performance reminds me of some of the best moments in Hooverphonic’s catalog…but truthfully, I think Armada Named Sound is taking the entire sound to deeper & darker places as a whole.  Solid ideas in the music and some of the best lyrics on the record are definitely found on “Toxinsane” – a real highlight for its transitional structure and completely stellar performance from Marta Karis…she sounds absolutely incredible in the chorus of this tune.

Listen to that diversity & versatility in Armada Named Sound though will ya?  It deserves credit – it’s absolutely something you can hear from track to track and the depth ANS displays within each layered-idea in each song.  “Life In Lofi” is a perfect example…like…I don’t even KNOW how a song like this ends up being created, comes to life or finds this high-level of extraordinary execution when every idea is so new from the music to the vocal-melodies.  It’s quite complex when you break it all down and listen to everything that’s happening…and the rumble of this one once everything fires-off in the chorus is powerful.  It worked for me…I could see that maybe this one might be ‘too-full’ for some in that bombastic nature of the way the chorus comes popping-out like it’s in 3D…but I think it really took the whole track to the next-level it was searching for.  I won’t lie…it did take a few listens for me to accept it a little more readily than I was at first…but that’s largely because the verse on “Life In Lofi” is one of the best on the Electronica record…it’s a tough act to follow.  The chorus is actually pretty damn gripping…it’s a switch in the overall energy in a bit of a jarring way – but it’s also something you’ll certainly notice.  Again, personally, I thought it worked extremely well in their favor; singer Bellabeth sounds amazing & sweet in the enveloping music surrounding her in the verse and she put power into the words for the chorus while Maus holds the fort with insanely creative electro that switches brilliantly & vibrantly from part-to-part.  The opening of the track itself reminds me of the danger, excitement & menace of the collaboration between Bowie and Reznor on “I’m Afraid Of Americans” – it’s got that same quickly-building mystery in the music’s tone & demeanor.

And truthfully, I ended up digging “Life In Lofi” so much that it almost made the smooth glide into “I Am” tougher than I thought it would be!  For the record, I think that’s just gonna happen to me most likely – I think “I Am” has one of the most widely accessible sounds on the entire album and will certainly appeal to a lot of people.  Everything rides on a dreamy pillow of air and intoxicating vibes…Marta delivers angelically with added beauty inspiring her tone…and even Maus drops in a couple verses on “I Am.”  I like what he’s saying lyrically…the flow might be a little on the old-school side of the hip-hop sound but with the trading-off of vocals to Marta from section to section, the combination finds a way to completely solid ground.  The vocalizations of Karis’ voice when she’s singing without using actual words is purely beautiful and fits right into the dreamy synth atmosphere of “I Am.”

As good as Karis has been on her appearances throughout the album…I gotta say that I am still absolutely in love with her performance on another one of Electronica’s lead-singles, “NY.”  We reviewed this track earlier this year in May as they were putting the finishing touches on the record and getting it all ready for release and the swing & sway to the pulse & energy of “NY” immediately caught my attention.  Still love everything about this cut from music to production to performance…it’s all here and was a completely solid choice as a lead-single off this album; “NY” is a fantastic way to pull people into Armada Named Sound.  Read my previous thoughts on “NY” in review from when we first got ahold of the track in May right here.

Excellent ideas on the slight filters and effects on the vocals of both Maus and Bellabeth on “Bittersweet,” they certainly add to the overall idea and use a range of textures.  High in energy with an addictive rhythm to both the music and vocal-flow, they turn up the heat on “Bittersweet” towards the end of the record.  With solid arpeggio-style synth lines driving the pace and guiding the vocals to the sweet-spots through its clever structure, impressive build and assembly…it all comes together on “Bittersweet” in a mix of intensity, melody and all-out wildness.  Bellabeth lets out some incredible notes and tones on this tune…I felt like it might have taken her a little longer to warm up to this one as I felt her performance got stronger, bolder and more confident with each line she sang…but even with that, still takes her no time at all to be right at her best.  Maus lends assistance on the vocals with quick-lyrics ripping by in a deadly whisper…which sounded great…and choices in the mix like on Bellabeth’s vocals approaching the four-minute mark added creatively-sound & solid ideas into “Bittersweet.”  Maus did an exceptional job of getting the main beat to stand-out in the low-end and add in bright electro elements into the mix perfectly overtop – “Bittersweet” moves and shakes with incredible confidence, precision & professionalism; a real highlight in the overall songwriting on Electronica.

Finishing the album very strongly with an experience unlike the rest, “White Keys And Black Silk” even proclaims at its beginning that ‘change is coming’ – and it certainly does at the end in a really smart, minimalistic tune to end the record on a real intimate note.  Was seriously impressed by this choice of ending…considering we started the record with the immaculate energy of “Midnight At Metropolis” – “White Keys And Black Silk” really makes you pause, reflect & appreciate just how much innovation, creativity and range Electronica has roamed through to get to this final moment.  Excellent vocals…seriously impressive music and even more impressive production – I honestly don’t think they could have made a better choice to end this record and give it that final blast of memorable impact.  It’s a fantastically progressive idea housed inside of only two & a half minutes, but the dramatic switch in the energy, tone & atmosphere really pull you in closely to listen.

I continue to be impressed by the evolution of sound in Armada Named Sound and just how well this collaborative effort works.  Electronica is boldly entertaining and vibrant throughout its entirely dynamic playlist…sharply innovative and completely creative…a complete pleasure to listen to from beginning to end and another reminder that there is still much wide-open terrain to explore in electro-music.  Armada Named Sound owns their corner of the universe with authenticity, brilliant collaborations and confidence & continue to push their ideas, sound and writing into the blissful beyond.