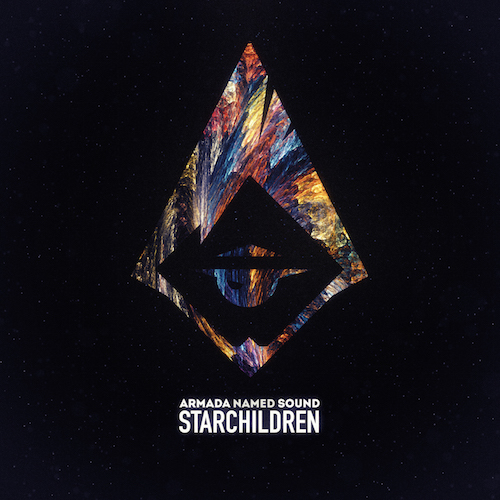 Here’s a combination of sounds I can get behind. Armada Named Sound is like the twisted lovechild of Madonna & Metric…lots of bouncing playful electro meeting the voice of some serious-but-fun vocals from lead vocalist Andromeda S who carries beautiful dreamlike melodies into the energy of the music perfectly.

As their latest effort, the StarChildren EP starts out you can definitely tell this duo has their sights set on atmosphere & creating music that’s based in electro…the whole futuristic vibe and such. It works extremely well in the opening track “Afterdrive” and the twist on electro-melodies that follow are of equal caliber in this evened-out EP that plays on like one massive highlight.

They’ve done well in the sense that they’ve taken somewhat older sounds from music’s past and found a way to create very inventive, modern-day music that’s full of unique hooks. A minute & forty seconds into “Afterdrive” will convince you easily as Andromeda S conjures up some far-reaching vocals and executes with perfection in her performance over the spectacular beat created by uber-producer Maus. It has vibrance, energy, melody…and overall it’s a memorable introduction into the world of music created by Armada Named Sound.

“Fixation” has an incredibly tight groove to the beat and some really well-written moments as far as the song-writing is concerned. Though I’m not a fan of the main hook, “Fixation” was more than entertaining overall with excellent electro elements and sweet switches in the tone of the melody, fantastic low-end rhythms and synth-changes…there’s a lot to like here. I wasn’t sure if that was really clapping at the end of the song…or if I was just applauding from the corners of my brain at first…I had to back it up just to be sure…

You could almost compare these two to Hot Chip in a sense…in “Droid Dance” you get the robotic but expertly delivered vocal sounds and sample and a massive stomping electro-beat coming straight at you in this up-tempo tune. Have you ever stared into that whole like…you know…starry screensaver thingy? This is the song I swear that’s always been playing in my head while I drift off into space for what is undoubtedly way too long when it happens…I’m glad they were able to bring the sound in my head to life…now if I could just get this screensaver to do its thing for a bit…

So yeah…”Droid Dance…” good track! All humour aside, it really is. My favourite aspect of this song is how that driving beat manages to change so subtly and really, the song along with it. This one really becomes a whole ‘something-else’ by the middle to end…even though the parts from the opening find their way back in eventually – those are just as awesome to hear return as the energy is flat-out insanity and this beat sounds like it’s coming straight towards you with a big ol’ bat in its hands; it means business.

The energy comes up even further as the beat flutters into place for Armada Named Sound’s final song on the StarChildren EP, “Blindvei.” I think this particular combination of the male vocals from Maus and the angelic altered-tones from Andromeda S works a lot better than the previous attempt on “Fixation;” somehow this all fits together just ten percent better than it did last time around. I don’t know…that could just be me. “Blindvei” isn’t a song without hooks…but somehow this whole track just feels a lot meatier…there’s substance here in this beat, melody and confident performance.

Without question I can tell you that two people making music this enthusiastic, up-tempo and energetic are the first to the party and the last to leave…suggesting that their parties ever even find an ending of course… Point being – these two no doubt have limitless creativity and obviously way too much access to the sugar pile; I have no doubt whatsoever that a band showing this much love for their craft will not only find an audience for their space-music…but that they’ll certainly be back soon with even more fantasy-based electro-excitement before you can even blink I bet.

I consider that a good thing…the StarChildren EP was a ton of fun to listen to.