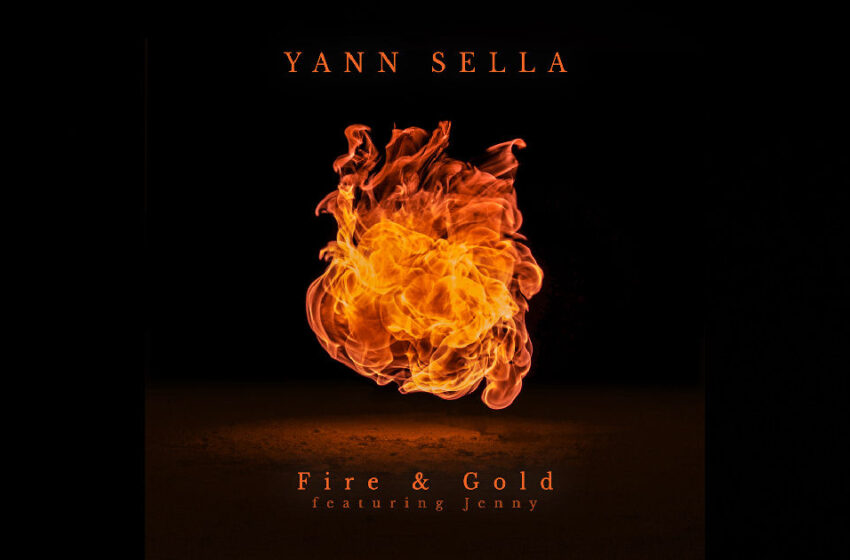 A single like this makes me realize it has been FAR TOO LONG since we last had the talents of Yann Sella on our pages over here.  It was actually back in 2019 that we last posted this dude’s work for a remix of his single “Turning Circles” featuring Manchester Rain – and I’ve been listening longer than that, tracing all the way back to the year before when reviewing the Existence EP, and the original version of “Turning Circles” as well.

A producer based out of Lyon in France – Yann’s been crushin’ it for years now – I knew long before pushing play on his new single “Fire & Gold” with Jenny to expect excellence, even though I always do my level best to keep my hopes & expectations in check.  The facts speak for themselves though – you can cycle through this dude’s catalog online and you’ll find Yann’s got an exceptional ear for sound and a remarkably gifted ability to produce sonically stunning material that’s guaranteed to make a connection to ya.  Mind, body, soul – maybe all three, and maybe even all at once!  You get the point, Yann Sella has been a proven force in the realm of digital sound and in behind the studio boards…and I cannot even begin to explain just how FAR BEYOND my wildest hopes & expectations he’s surged with this brand-new single called “Fire & Gold” featuring Jenny.  The moment it started, my very first thought was “hey, right on – it’s great to have Yann Sella back, dude really knows how to get the clarity & sensory textures into the music he makes.”  This lasted approximately…hmm…nope, exactly thirty seconds as the ethereal atmosphere of “Fire & Gold” began to reveal itself through the mystique of the opening.  Sounded good!

…and I never want to leave this extraordinary place I’ve found, here with this song.

This.  This is a straight-up audible TRIUMPH y’all – I’m not even remotely kidding.  If you want to hear an artist/producer combo that gets the absolute maximum out of every ticking second you’ll hear – this is the duo you want on your playlist right NOW.  I mean it – now!  Normally I suppose it’s my job to encourage you to read the reviews I write, but stop whatever you’re doing, right here, right now, and click on “Fire & Gold” below – I PROMISE YOU SUPREME ENTERTAINMENT TO WITNESS & BEHOLD!  I don’t care if you even read another word I write – YOU just do the right thing for YOURSELF, and listen.

NOW you know.  NOW you’ve heard it for yourself…and NOW you know exactly why I’m THIS EXCITED and typing in ALL-CAPS like a raving lunatic.  Because this…THIS…is as good as music truly gets out there.  Yann’s beat is powerfully dynamic, hard-hitting, and sonically beyond spectacular; his production is as cutting-edge, crystal clear, and on-point like never before – and considering how many great things I’ve personally had to say about his music from the moment I started listening, that’s saying quite a lot.  And as for Jenny?  What an ALL-STAR, full-stop.  You couldn’t find a better pairing between two artists than you’ll find in this single right here, that’s not an opinion – that’s a FACT.  A musical FACT, that’s right, I said it.  Jenny is mesmerizing, enchanting, bold, beautiful, and all-out extraordinary.  We’re talking about a singer that would easily rival the irresistible allure, appeal, and artistic sound of someone like Imogen Heap…and in my world, that’s about as amazing as singers pretty much ever get.  So not ONLY do you get what’s quite likely one of the best you’ve ever heard from Yann Sella in the music itself, if not THE best you’ve heard from him to-date – you also get a 100% knockout vocal performance from Jenny that complements every second of “Fire & Gold” from the moment she starts until the last note she sings.

The HOOKS!  OMG – the HOOKS you will find in this song…should leave you speechless quite honestly.  That first major one of the song kicking into gear itself is worth the price of admission alone – but going on to reveal the stunning collage of sound in the swirl of the chorus, is another breathtaking experience in itself as well.  Tell me that when this song ticks past its first minute, and these two explode into the low-end groove and vocal hooks to follow that you don’t feel that!  You KNOW you DO!  How could anyone NOT?  As for the verses, sure, they’re lower-key, mellower, sleek & stylistic – but they’re equally perfect, and the way they use that chilled-out energy to rumble into the most intense moments of “Fire & Gold” is just pure brilliance.  I know I’ve written a lot…I always do…but truly, I’m lost for words here in the best of ways…I’ve got nothing but sincere compliments for these two & what they’ve achieved on this new single – Yann Sella & Jenny just fully raised the stakes for the rest of the scene big-time in 2021.

Find out more about Yann Sella from the official website at:  https://www.yannsella.com