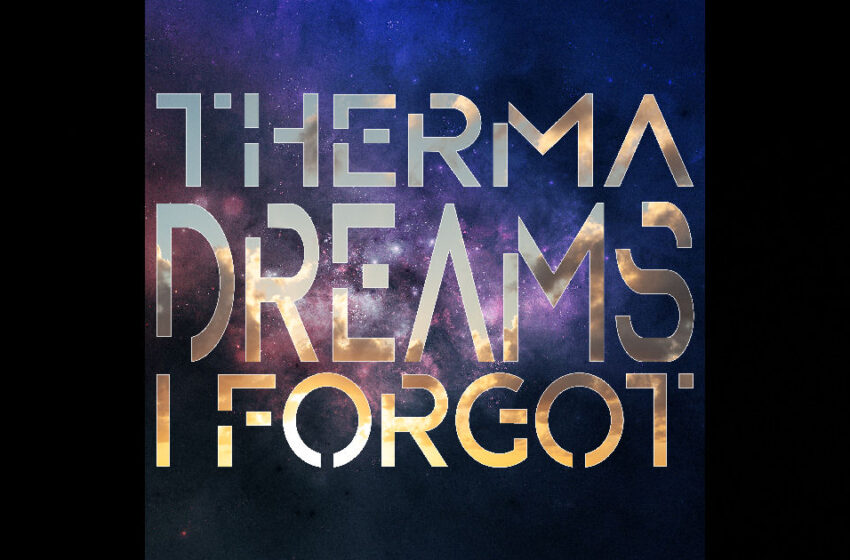 Ayyyy…right on!  Therma’s back in action!  I like this dude.

Ohhhh no!  I had nothing but great things to say last time!?!

Okay…it’s nothing quite so tragic.  I’m feelin’ like we might have rushed things a bit in some areas this time around, but there are still quite a few positives to be found in this new single called “Dreams I Forgot” – and let’s not forget, this is still only the second cut released by this presumed one-man band – it’d be way stranger to find nothing to work on & a series of flawless tunes coming out that early on into a career.  So truly, this is actually a lot more up my alley…maybe I can help this mysterious dude out a bit more this time around than merely confirm everything is in the right place and this project’s all ready to roll.  Here’s where I’d be all for puttin’ the brakes on real quick to figure out how to get the best out of what we heard on the previous single’s production to combine with writing that’s more gripping like this new one has on “Dreams I Forgot.”  If you track can that recipe down my friend…that’ll be the winning combination for Therma for sure, and leave me without anything too obvious worth complaining about.

As it stands right now…I think “Dreams I Forgot” in terms of its ideas, melody, power, and punch…quite likely has the edge over everything I’d heard back in February this year when I reviewed “Die Another Day.”  Don’t get me wrong…it was, and still is, a solid cut…actually very solid when you consider it was a debut single & all…”Die Another Day” was a bit more on the Pop side of Alternative sound, as opposed to “Dreams I Forgot” making more of an effort to ditch the shiny aspects, and dirty things up a little bit.  Slow it down there hoss…I get the excitement, but you don’t wanna overlook things that are well within your control, or not utilize skills that we know you have based on what we’ve already heard.  As in…this new cut gets stuck right into the audio mud at times, especially at its most intense…and that’s not an issue I remember running into at all during the clarity of “Die Another Day” just a couple months ago.  I get it – we’re talking about two different tunes; but we’re also talking about fundamentals that kind of seriously need to be applied straight across the board, lest ye be yieldin’ some bizarrely uneven results.

“Dreams I Forgot” has production that pales in comparison to what was accomplished on “Die Another Day,” and that’s a major concern my friend.  For two reasons really…one being that, it’s something we can hear as listeners on our end simply by clicking from one track to the other – the second being that THERMA…you know you’ve got that exact same ability too right?  What troubles me most is that Therma would have had just as much access to the previous cut as any of the rest of us would, if not even more-so by being able to look over the work-files and all that technical stuff for reference if it was needed…and if that IS indeed the case (which to be clear, it is) – then you’re hearing the same things we’re hearing, aren’t you?  It makes the mix on “Dreams I Forgot” a whole lot harder to advocate for.  If this was the first track I heard, I could maybe even see myself pulling a couple punches…maybe…but here with a second cut, we’ve already been exposed to what Therma is capable of…and received more in that regard than we get here now.  At first I was like…it’s all in the drums…they’re just too GIGANTIC for their own good…but as much as I’d like to confirm it’s that simple…it’s not…there’s more to it than that…and I’m not sure what I can recommend to Therma other than a full-on remix to polish this all up.

If I can hear the issues within less than ten seconds my friend…all I can tell ya is that I won’t be the only one who does – and again, what’s strange to me, is the FACT that Therma would be hearing what we are too.  If that’s the case, then we have to assume everything we hear, is done with intent and purpose – or it’s been rushed; neither scenario is fantastic, but both end up producing similar results if y’ain’t careful.  I like the ideas in the drums and in the instrumentation…I like the structure and the potential…I think the hooks in the chorus are extremely effective and built to last…I’m not a huge fan of the words in the verses, or the pace/pattern to the melody…and the production needs a massive overhaul to reach the accessibility a track like this is gonna want to have if it’s making a bid to find its way onto playlists with other cuts out there – even Therma’s own previous release.  Right now, it’d sound weird to even have the two that I know of featured back-to-back with them sounding like they’re from entirely different sources.  To be fair to Therma – “Dreams I Forgot” does go BIGGER by design…but we gotta wrestle a whole lotta stuff under the red line here to make it all as listenable as it should be there my good man.

All that kind of stuff is twisting the dials & whatnot – to me, what matters most are that the ideas are intact, the performance is confident, and the material is ultimately there – and I feel like Therma is still shining bright with potential in all three of those categories, in addition to proving all that’s right where it needs to be at the heights of intensity “Dreams I Forgot” reaches.  When the hooks are revealed in the chorus of this cut, I’m fairly convinced we’d all universally agree that the vocals remain the most engaging aspect of Therma’s music, and also possess the most ability to make an impact on us out of any singular element in a track like this…there’s some great ideas in here, but those vocals steal the show each and every time I listened.  Rivaled ONLY by…and it’s a temporary moment in time…but the only major competition I felt like the singing on “Dreams I Forgot” had was that slight departure into a beastly bridge, where the vibe becomes even larger and more menacing than it had already been.  All-in-all, Therma’s rocking with a very dynamic style that’s going to produce incredible results over time – I’m fully confident in that.  At the early end of a career, there’s always victories to build on, and points along the way that need refinement, evolution, time and experience, before they’re fully worked out – the same things/reasons as to why the majority of the scene hits their prime years into doing what they do, and not simply straight outta the gate.  As I like to remind y’all every so often – it’s something you should both want, and hope for…I can’t imagine the hell of having nowhere to go but down – Therma’s got all the right pieces to build an identifiable sound with, and carve out a genuine legacy in the process.

Patience, time, objectivity…these are the ingredients most needed from here on in.  Don’t get it twisted – I understand the excitement – I mean, listen to “Dreams I Forgot” – there’s PLENTY to be excited about and many positives to be found from the structure to the style/sound.  Personally, I like this cut more at the roots of its ideas and raw power of “Dreams I Forgot” much more than I did “Die Another Day” from earlier this year, though I’d readily concede the latter is still the more accessible to the masses of the two cuts that have been dropped online by Therma to-date.  As I also like to say around these pages of ours though…unless someone’s out there pokin’ ya in the ribs with a sharp stick or you’ve got THE MAN in the suit & tie breathing down your neck to get that next release out into the world by yesterday…take your time & take it every time you can my friends…it’s what’ll lead you directly to your best results.

Listen to more music by Therma at Spotify:  https://open.spotify.com/artist/5ZJK7KK8bPVTySjWhIKusG