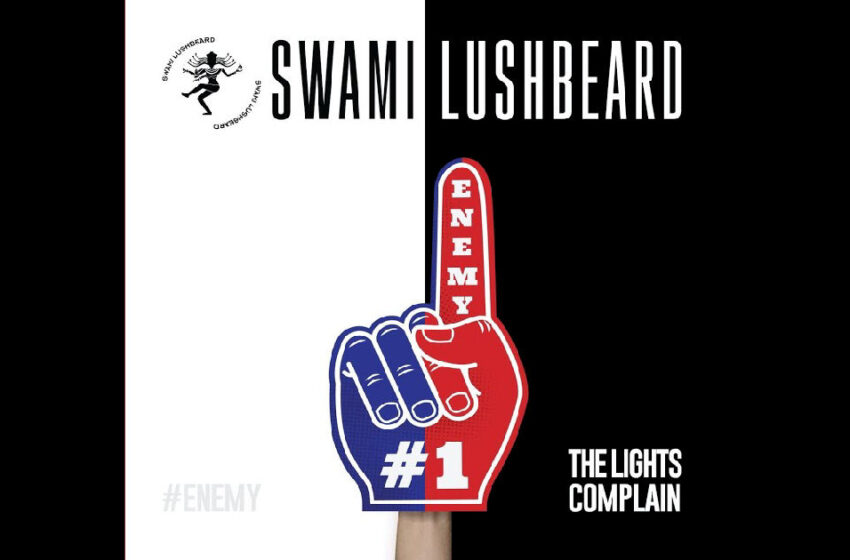 The warped effect of our isolated times has really been felt over this past week here at SBS, no doubt about it.  I’ve had artists that had reappeared after five year absences on these pages of ours lately – and while Swami Lushbeard was so busy rockin’ their way through 2020 – somehow, it has completely eluded me that there was nearly six full months in between their last single “All About You” and this shiny new one called “The Lights Complain” right here…and I ain’t gonna lie to ya, that’s insane to me.  Not that it took’em a bit longer to get this one out there mind you, just how much time has passed and how quickly it seems to keep on movin’ while we’re all still more or less confined to the boxes we live in.

Anyhow!  That’s neither here nor there & really has nothing to do with what I’m hearing here, I’m just kinda trippin’ out on this fact lately…it’s amazing that I can still have all these Swami Lushbeard songs on my playlist over here like they just came out yesterday, when really, there’s already months gone by.  On the plus side of that scenario…I suppose it’s fair to infer that what they’ve been coming up with lately has retained the fresh AF sound it came with, and the fact that songs like “The Truth” & “Enemy” are still being jammed over here consistently & constantly is full proof that these tunes are holding up.

So!  Here we are – it’s 2021 now…and this would be the first official single of the year for our good friends in Swami Lushbeard, the ever-reliable five-piece Rock band based outta LA, which is still technically tied-in to their string of singles released last year as they make their way towards the full finalized EP at the end.  And at this point, that record, whenever it may come out, is basically gonna play like a greatest hits compilation…because that’s really all Swami Lushbeard has put out over these past couple years – single-worthy tunes, each & every one of’em, truly.  I’ve pointed out the massive leaps forward that they’ve taken between their last official EP in 2017 & the music they’ve made beforehand, and I fully stand behind it; Swami Lushbeard has always been a great band, but they’ve absolutely dialed right into what genuinely works best for them as of late, and it’s getting their max potential outta them.

They explode with personality right from the drop of moment one on “The Lights Complain” – and it is AWESOME to hear this band come out swinging so vibrantly in the thick & heavy groove that leads the way through this tune.  Rhythm-section…y’all are the heroes to this particular cut from the Swami Lushbeard crew – bassist Darren Scholtz puts an incredible stamp of pure excellence throughout this whole track with his steady rumble & impressive musicianship – and right there in lock-step, ready to rock, is his counterpart in Ian Michaels, who left nothing on the shelf when it came time to lay down the beats on those drumskins…dude’s crushin’ it on this song with a ton of absolutely spectacular fills along the way.  Love the opening of “The Lights Complain” and the art of the reveal here…started out by the melody in the piano/keys of M@ Sachs with Darren’s silky bass-lines along with him – within about 15 more seconds on down the road, this track ain’t just movin’ – it’s flyin’ at full speed with a mean & lean groove to it that seriously will not be denied or find resistance from any set of informed ears out there.

The rest of what you’ll hear deserves shout-outs as well, but of course – it’s Swami Lushbeard folks.  Even the Vegas odds on them succeeding right now would simply pay out at a 1:1 rate, it’s really is that much of a given right now; you might not make a whole bunch on the bet you’d make for them to win, but I can guarantee ya a stellar & sufficient payout in quality tunes right now at this point in their career.  Conceptually, “The Lights Complain” is one of my favorites in their catalog without question – and this is a band that’s always put significant thought into all they want to say in that regard.  Much of the lyricism here, though always written from a fairly broad & all-encompassing distance, still digs deep into a lot of what we are & who we are as individuals as well.  Essentially, it’s a song that likely applies to us all in many ways, and probably even more on a personal level for each of us as well.  The rumor is, that much of this whole song’s theme revolves around simply walking down a street late at night, caught up in the feeling that the lights above are shining down only for YOU and YOU alone, like you’re all that truly matters.  And that’s certainly interesting to me…I think it will be for many of you listening as well; I don’t think we always acknowledge just how many of these types of thoughts we actually share in common.  Which, yes…gives the whole thing a sense of irony to a degree as well – we’re all super special individuals all thinking the same thoughts and feeling like the lights are shining down brighter on us than anyone else…because that is, a reflection of the world we’re largely livin’ in – and hell, perception IS reality as far as I’m concerned.  When I’m walking down the street at night, livin’ in the Matrix in my head and rocking to tunes without a care which direction I turn next – you better believe that I believe each and every single bulb that lights my way was placed right there for me, for that specific moment, and that I probably feel every bit as much invincible as I do invisible.  It could be narcissism, it could be a heavy belief in simulation theory, and of course it’s also much more likely that those same very lights that shine above our heads are simply regulated, blinking on & off at a scheduled time they’re supposed to be…and that anything else we’d read into it would be projection & nothing more.

At least I think so?  These lights don’t have their own emotions, thoughts, and feelings – do they?

Originally when I wrote that, I thought it was a clever and cute line to drop in here…until I kinda realized this might be the entire point altogether.  WE think that “The Lights Complain” because WE ascribe meaning & purpose to just about every move WE make, and observe them all with savage scrutiny.  WE spend so much time inside our heads, like you’ll hear in the lyricism of this new Swami Lushbeard song, that WE start to believe these things that occur, even things as simple as lights turning on to light our way as we’re walkin’ down the street, really are happening to us & us alone, when the reality is so much different than that.  “The Lights Complain” is as riotously entertaining as it is seriously substantial in that philosophical type way that truly has you looking inward and examining how you view your surroundings – that is, if you even DO view your surroundings at all…you might just be a resident living in your head.  In which case…I mean, you’ll listen to “The Lights Complain” and listen to its indignant final line of the chorus and completely find yourself agreeing with your new anthem for 2021…just understand that the rest of us can see you under those lights, and that if that’s your assessment of what you hear in this song, we now know who you really are.  Excellent drama in the music and the structure of this song, stellar vocals to go with it from the lead to the harmonies, vibrant keyboard hooks from M@ that’ll have you whistling his main melodies & contributions to this tune around the house for days, production that’s perfectly on-point and gets a fantastically crunchy sound out of the band in this electrifying performance they’ve put in all-around, and that aforementioned rhythm-section crushin’ it at every second they had the opportunity to on this new Swami Lushbeard single – it’s a sonic smorgasbord of all that you wanna hear!  You factor in the absolutely impressive songwriting & musicianship in the breakdown, bring-back, and solos on “The Lights Complain” and its remarkably thought-provoking concept & lyricism…and it becomes pretty easy math to solve – everything adds up to a WIN here, 100%.