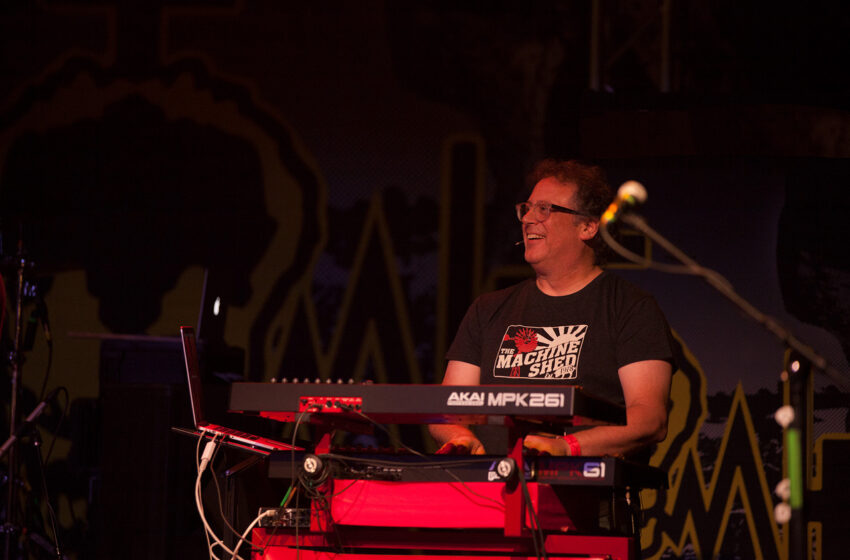 SBS:  Hi!  Who are ya?  Nice to meet you (again?)!  Glad to see you’re among the savvy out there paying attention to what’s up at our page.  Now spill all the details friend-o – tell us about you & your music!

M@:  Classically trained through my childhood up until young adulthood.  Escaped that to play rock, fusion and whatever else was fun in various bands throughout the years.  Currently play keyboards and sing backups in the band Swami Lushbeard.  While that is on pause, I am working on creating some new music at my home studio playing all the instruments by my lonesome.  Look forward to being able to jam with my bandmates in the flesh.

M@:  I will remember 2020 as the year that started out really bad and just kept on going.

I had a bad feeling about the year when, while having some drinks at a bar with my wife and some of her family on New Year’s Day, we learned that one of her closest aunts had been found deceased in her house.  Lucky it turned out that it was indeed the low point to the year.  Thankfully we have not had anyone pass away due to Covid in 2020 but boy, did the world go crazy or what?

SBS:  Undoubtedly, this past year was one seriously hard year for just about everyone, and even harder on others.  Let’s see what we can do to dwell on the positive side here – there was a lot of time around where there typically wasn’t before – did you use it wisely?  Were there any positives for you in 2020?

M@:  I like to be at home so the staying at home part was OK for me.  I lose myself in my hobbies and music so this kind of worked out.  Was able to focus a lot on what I wanted to accomplish musically and began to work on becoming more well-rounded.  Have picked up playing the bass and guitar as well as dabbling with some percussion.

SBS:  What would you say the year 2020 taught you most about life from a musician’s perspective?

M@:  You can come up with a lot of ideas but nothing compares to the input from your bandmates when in rehearsal.  The organic development of a song is just very difficult to come by in isolation.

SBS:  Do you have plans tentative or concrete plans to get back onstage or in the studio this year yet?  What are the short-term plans for the future?  Got any new music coming that we should know about?

M@:  I will have some ideas to present to the guys when we get together again.  Been working on some things.  I am sure there will be some new ideas from everyone else.

I think everyone in Swami Lushbeard are chomping at the bit to get back together.  We were fortunate to finish laying down tracks for five songs, three of which have been released over the past nine months.  Really great tunes.  Maybe you have heard them?  LOL!  The last two are quite a departure.  Get those headphones ready!

SBS:  In the rebound from Covid-19 – what’s going to be key to reviving the music-scene, and how can you & your music personally play a role in that?  Will it ever be the same?  Is there anything you’d like to see change from the way that it was before when it all comes back…from yourself, or from the fans?

M@:  I think the scene will revive all on its own.  It is not like people all of a sudden will not be into seeing bands live.  I was recently in Nashville and that town was hoppin’!  They are not on lockdown like here in California but people were wearing masks and there were rules for social distancing etc.  After months of not being able to see live music it was so awesome.  I think people are just going to really be into getting out there again and Swami Lushbeard will be ready to hit the stage and entertain our fans again!

As far as change from before, LA has really seen the music scene become more tribute band centric.  I hope that people here will start being more open to something new.

SBS:  What were your three favorite albums of the year?  Or most listened to…we’re not picky – what music got you through 2020 & what was it about those records, artists, & bands that kept you listening?

M@:  I was in a motorcycle accident in late 2019.  Had to have surgery on my knee and had a pretty good concussion that caused the room to spin around on me for a few weeks.  Kind of scary but once I knew it was from the concussion I kind of embraced the spinning!  Well, I don’t know if it was the concussion or what but during the time I was pretty out of it I discovered this band from Norway called Moron Police.  They had a new album out called A Boat On The Sea.  For some reason it really resonated with me like nothing has in recent memory.  I listened to some of their earlier stuff and it was way different and not nearly as good in my opinion.  But this album is great.  Maybe because they added a keyboard player?  Anyways, I would highly recommend a listen.  Another album that I really have been liking is All That Is You by a band called Thrailkill.  Believe it or not, that is the guitar player’s last name.  It is all instrumental progressive metal but the compositions are a bit off the metal edge.  The last song has vocals and is very interesting.  The third album that has gotten me through this time is Swami Lushbeard’s latest recordings because it made me feel as though we were still moving forward even though we have not been together.  And, coming from a completely unbiased perspective, ahem, they are really quite impressive tunes.

SBS:  What would you say your New Year’s resolution would be when it comes to your music?  What do you want to change?  How do you want it to evolve or be different than it already has been – or do you?

M@:  I want to get better at the other instruments.  Guitar, bass, percussion, kazoo?  Just kidding on the last one there.  Well, maybe not.  I think this will give me a different perspective when writing songs or coming up with parts for songs that Don, the principal songwriter for Swami Lushbeard writes.  I am at a very basic level with these other instruments, so I really go for patterns and the sound and not necessarily the theory like I do when I play keyboards.  Want to learn how to use the recording software better as well.  Logic.  Logic.  Logic.

SBS:  Wide open question for ya.  Outside of music – what is your biggest hope for the year ahead?

M@:  I would really like to see streaming platforms work to benefit musicians.  Apple Music, Spotify and the like are really damaging to the art by not compensating musicians fairly and pocketing the vast majority of the money.  I think musicians really have to start boycotting these companies.  There are better ones out there like Bandcamp that treat artists more equitably.  Artists must realize that they have the power to choose where to showcase their music.  I mean, they aren’t getting much compensation from streaming anyways.  But this means that the people that listen to music need to change their attitudes as well and realize that the years of practice and hard work that goes into the music that they enjoy is worth more than what amounts to a penny or less per listen.

M@:  I think for Swami Lushbeard it would be to continue building on the buzz from the songs we have released so far with the new ones yet to come.  And when we get together again, we can really make a push to have a steady stream of new significant material going forward.  Being able to get back on stage regularly and perhaps be picked up for a festival or two and eventually open up on at least a regional tour for a more established band would be great.  But in the end, if it is just being able to get back together having a great time making music, I’ll take it!