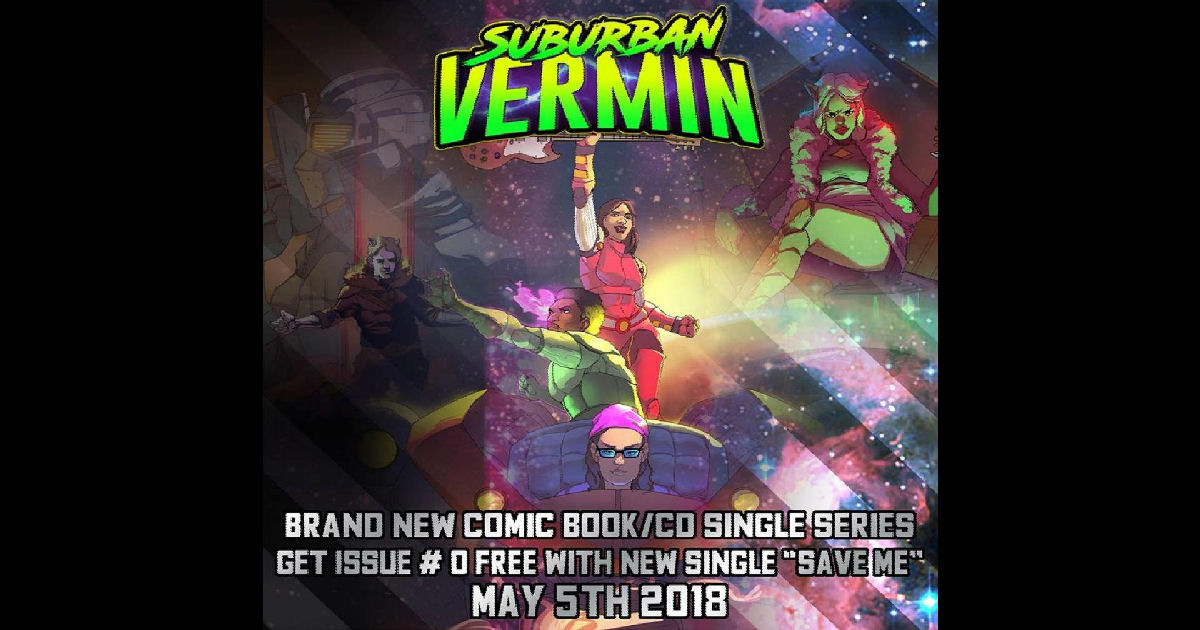 For real…every time I check out what Suburban Vermin is up to they’ve got something awesome on the go.  I mean…it’s only my second experience with the music/art combo they’ve got goin’ on, but all indications point to a limitless well of creativity & possibilities that goes freakin’ deep when it comes to what they’re capable of.  Last time around, we were introduced into the realm of Suburban Vermin and their punk sound, along with their official comic-book, for TV Head Nation Part II – it quickly became clear that this band from Seattle was offering something different altogether and an entirely rad way into their music.

To me, it’s that hybrid appeal of both the visual & audio elements combined that makes me excited about what Suburban Vermin is all about.  The music rocks and is played with a raw, untamed, gritty, and powerful style, and the comic-book complements the music by featuring the band as rockstar-superheroes in the storyline.  The new issue that comes out with their single “Save Me” does a great job of enticing you into the story through badass drawings & art, creating a compelling set of images to look at while you’re cranking up the new Suburban Vermin tune as you read.  Like a great issue #0 should – they don’t reveal too much, still give the story plenty of action and momentum to carry forward, leaving you on a whole pile of questions as to what will come next when they release issue #01 in June 2018.

That’s in the summer of course, but on the good-news front, things are about to kick-off with the release of the grunge-punk single “Save Me” and issue #0 coming out just around the corner.  To help celebrate ‘Free Comic Book Day’ this year on March 5th, you’ll be able to grab yourself a copy of the new issue and song from Suburban Vermin and get yourself acquainted with the music & art they make.  Circle the date punkers…you wanna get in on the ground-floor now so you can say you were cool later.  Issue #02 is also on the horizon and set to be released in late June as of right now – what have I been saying since day one about Suburban Vermin?  This band has it together from all angles.  Each of these issues comes with a new single from the three-piece alt-punk-rock crew…aside from it all being no doubt incredibly rewarding to create this kind of work intersecting the arts like this, it’s also just brilliant in terms of being a strong hook & gateway into the music, and vice-versa of course for the comic if you were to go for the music first.  They clearly work hard at creating something unique and their own in this world and I’ve got a lot of love & respect for that – Suburban Vermin is establishing an identity that’ll truly last a long time.  Whether it’s the music or the artwork, or both, there’s a great chance people will remember this band.

As far as the new song goes, I’d probably click the repeat button if you want to listen to this cut while you read issue #0.  Unless you’re a speed-reader, there’s a good chance this punk-explosion will rip by you with its full just-over two-minutes in length before you’re even through the first couple panels of the comic!  Lead-singer Amanda Gamino takes a page out of the grunge playbook in singing this one, adding just enough of that backwoods-alt-hillbilly-freakout energy & tone in her voice to make the verse stand out solidly.  The chorus and music overall actually has quite an inviting sound to it for what you might expect – Suburban Vermin has left this one up to Amanda to add that signature grittiness you expect from this band through the rasp & crunch in her vocals.  Great punk is layered like this in my opinion…you want that in-your-face attitude on display and out front, but in behind that, you want that song to exist for verifiable reasons of its own, which “Save Me” does.  The rich bass tones from Jason Vermin add a perfect amount of rhythm & groove through the verse, and then really straighten-out for a chorus that delivers in the melody department.  Ali Han rounds out the Suburban Vermin lineup with a solid beat-down on the drums throughout “Save Me,” steadily employed in every moment of the song, just as much as you’d expect from music in this genre.  It’s a PUNK track…and good lord does it pack a massive grunge attitude in through Amanda’s vocals!  Don’t get me wrong though, you can’t possibly dress this song up enough to take it home to your mom (unless she’s super dope) – but if you’re a fan of the genre and the riotously empowering energy it has, “Save Me” should fit right on to your playlist.

And bonus points to the most brilliant panel in the new comic book…I won’t give it away because it’s not released yet, but I’ll hint at where you can find it and what you’ll find.  There’s a moment where the characters have to go on a mission and they’re assigned a cover – in the most awesomely sarcastic and insightful way they could possibly skewer the music industry in a manner that only a punk band could.  I read it…then I re-read it to make sure I had read what I thought I read, then I just about died laughing.  Musicians will absolutely be in on the joke…or…at least…share in the reality.  You’ll see soon enough!

Like I said…always something rad going on with this crew and they’re continuing on the strong path that they’re creating for themselves, making music & art in ways that are bound to get noticed, one way or the other.

Don’t forget to get your copy of issue #0 and the “Save Me” single FREE on May 5th – stay up to-date on the details & make sure to visit the official Suburban Vermin website at:  https://www.suburbanvermin.com/