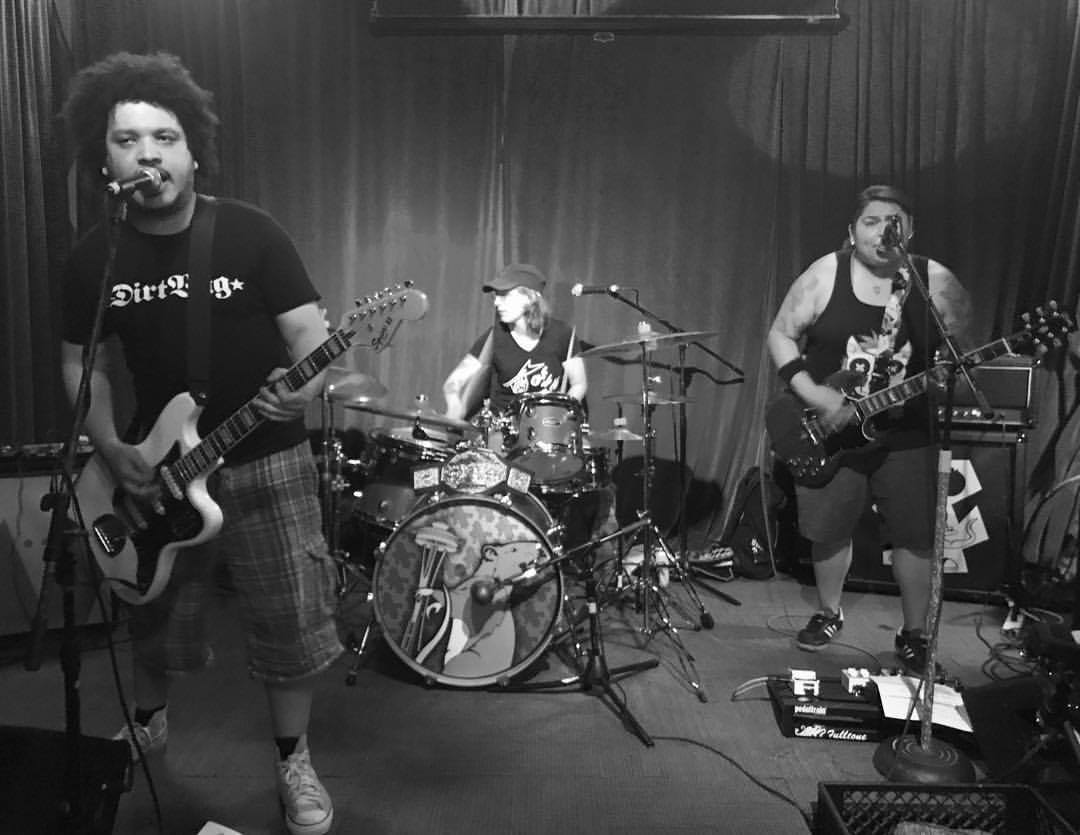 You know…there was a time only about three or four years ago that when people would ask me what it takes to change the music-industry that my answer was we had to morph musicians into superheroes and attack the entire business like they do in comic-books.  That to me, seemed like a solid way to approach it, to bolster the excitement, to give something to art just as much as to the music and a chance to restore the independent-scene with an arsenal of tools they we’re all born with at their disposal.  No big-money – just pure art, enjoyment, passion, enthusiasm…the best parts of music.

Like many of our best thoughts – we tend to share them with other people across the globe, unbeknownst to us until we finally discover the evidence.  Projects like Samurai Shin and Those Shadow People are a couple of examples that took these ideas and ran with it, creating soundtracks to support their artwork in comic-books & vice-versa – and we’ve discovered another with Seattle punk-band Suburban Vermin.  I might not be the world’s biggest punk fan…but I certainly have a ton of love and respect for the way that this three-piece is putting their art out into the world.  Not even kidding – aside from the kickass comic they’ve got going on with their latest music, I also see evidence of digital download trading cards, 3D paper-craft figures – even a BOARD GAME has been created.

And to the rest of you out there, I dare say, if you’re not taking a lesson from this and finding that new angle to put your name & music out there…you better find that creative gear if you want to keep up.

Suburban Vermin will outlive us all with imagination like this threaded into their art.  Everything looks seriously consistent in quality and creativity right across the board – and you have to give them credit where credit is due – Suburban Vermin is just about to play their ten-year anniversary show, so they’ve gotta be doing something right…right?  It traces back to the beginnings with Jason Vermin (Vocals/Bass) in 2007, Amanda Gamino (Vocals/Guitar) joining only a year or so afterwards…and then the infamous revolving-door drummer situation takes hold until 2015 when they completed their sound by adding Ali Han (Drums) officially to the lineup.  It’s a project that has clearly adapted, changed and done what’s been needed to survive as long as they have…and I’d imagine that now armed with a third permanent member, Suburban Vermin is sounding better than they ever have before.  I’m assuming of course – the two songs from their new EP are the first experience I’ve had with the music of this Seattle crew…but even in the punk world, a little bit of stability can go a long, long way.  Sure sounds like it did.

Because I’ve often said in other genres outside of my main personal preferences many times – I might not know as much about the music, but I know what I like.  “Different Note,” the opening cut on the new EP crushes it!  I’ve had the good fortune of hearing some really gripping rock-songs in the past couple days through the music of Dazor and A Vintage Year – and Suburban Vermin have got me going into a solid three-for-three with this first track on the record.  The attitude from the vocals drips and snarls from the mic – and personally, I absolutely freakin’ loved it.  I’ll admit when I first listened to it, I began to question whether or not it was going to work for the people out there…it’s impossible not to notice the extremely fine line they walk between what sounds grating and what sounds great here.  The vocals are right on the edge of a serious whine & grind…but if you ask me, it’ll only take a listen or two to realize that the tone, sound and approach in the vocals have just as much hook as the writing itself does.  I firmly believe that those out there that even remotely dig the sound on a first listen are going to go down the same rabbit-hole I did, listening on repeat until this entire performance becomes highly addictive.  By the end of my time listening to “Different Note” I felt like I needed an IV-drip with this song stuffed into the bag to bleed into my veins as I walked around the studio so I wouldn’t suffer withdrawals.  What’s not to love?  The guitars grip & rip, the drums are furiously intense and solidly controlled in the power of the hits, the bass is KILLIN’ it back there too if you listen up close.  There are solos, there’s a rad verse followed by an even more kickass chorus – “Different Note” has a wicked amount of electricity & energy in its movement and completely satisfies with its structure.  That chorus!  Like I’ve been saying…heard some big ones lately…this fits right in there with that energy I’m seeking out in rock-anything right now and makes the impression this band’s efforts deserve.  I’d suspect that there’s a chance those vocals will be the polarizing part of this tune for some…but without that attitude, charisma and character, what is punk music anyway?  I ended up thinking the sound fit the music perfectly…backup vocals complement the main lead solidly like good punk does and Suburban Vermin come out sounding supercharged & ready to kick not just some, but ALL of the ass on “Different Note.”

If anything, I probably embraced that unique attitude and sound of the vocals almost too much…I missed it on the following tune “Beat Before The Breakdown,” which is much more classic at its roots…like The Clash, The Ramones or even early Gob in the “Soda” days.  Again, fans of real punk-rock will definitely find something to turn up here; the song is well-played, the chorus has that familiar punk sing-along feeling and Suburban Vermin are still kicking, thrashing and screaming their way through it all, just in a somewhat more controlled and traditional approach to the writing.  Credit to those guitars – loving what I hear there…excellent crunch in the distortion and they definitely drive this tune; inventive and clever drums, solid bass tones packing the punch into the low-end…I’ve got no beef with the way these guys play their tunes, none at all.  At the end of the day, all I’m saying regarding the comparison between the two songs and how they sounded to me ultimately, is that I felt like “Different Note” reveals a bit more about Suburban Vermin’s actual sound, whereas “Beat Before The Breakdown” seemed to more highlight their ability to pull-off & play a really solid punk song…but there’s less of ‘them’ in it…if that makes any sense.  The sound of the vocals on “Different Note,” while no doubt polarizing – are also a large part of what seemed to separate them from the rest…and that’s something to consider.  But yeah…don’t get me wrong here, both tunes hit the mark of their ambitions and put a couple dimensions to their sound on display…can’t really ask for more out of two songs on a record than for them to both be entertaining right?  Mission accomplished as far as I’m concerned.

Incidentally – just to touch quickly on the comic-book from TV Head Nation Part II before I send you all off to seek out Suburban Vermin on your own time – you WILL find creative threads that exist between both worlds and cohesiveness in this overall idea they’ve got going on.  Like good art tends to do, many of those tie-ins are loose ones that allow you to interpret the meanings on your own without being too direct, but there’s a few that you’ll recognize along the way when you read & listen at the same time.  The comic itself was a really rad read…bad-ass villains, heroes you can identify with as musicians – and an uncanny parallel that exists between their world and the current state of our own…loved the way the art & drawings looked in their sketchy-style…but you know me, I’m a huge fan of combining art & music in every possible way.  I’m also a HUGE fan of doing EVERYTHING possible to put yourself out there into the world…and Suburban Vermin has really left no stone unturned when it comes to that.  There’s a plan in place here…don’t let the reckless punk-abandon & chaotic nature of the music fool you for one moment – this crew knows exactly what they’re doing and they’re making all the right moves.