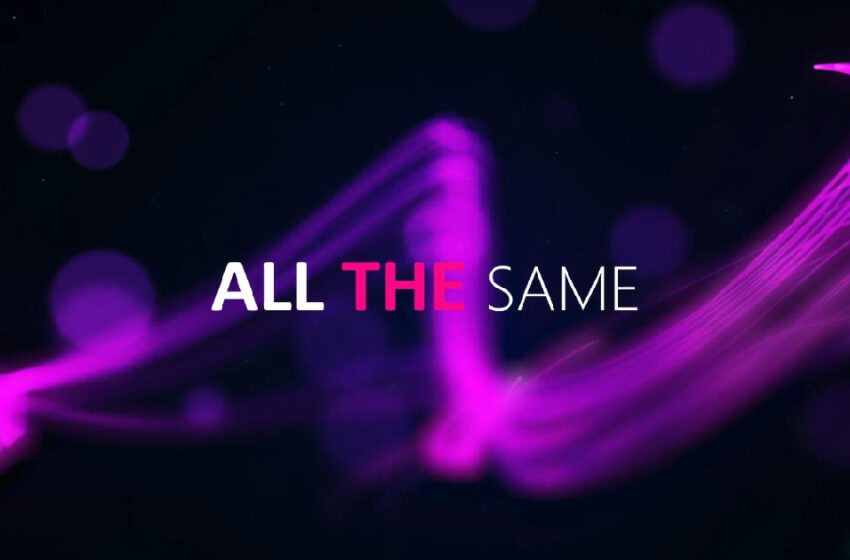 Perspective is such an interesting thing to me.  Here I am this morning, thinking to myself just how different these next twenty years of human history to come are likely gonna be, and then here I am, listening to Simple Stone’s new single as I’m contemplating my existence & what it all means, while they’re singing about how it’s “All The Same.”  I’ll fully admit I don’t know who is right and who is wrong in this scenario…I suspect it’s actually more like a little of column A & a little of column B, know what I mean?  What originally got me thinking about the future was some online video about Bruce Willis selling the rights to his FACE…and so yeah…here I was thinking about how weird, strange, and different the years ahead are probably gonna be…but then I went deeper with it – I started thinking about how WE as a society will end up handling things like this…and in that respect, I side with the Simple Stone argument – it’s gonna be “All The Same.”  We’ll find a way to monopolize & monetize the technology, and in the process, likely exclude a whole bunch of people or create a whole new class system…imagine a world where, you either live a life that’s worth digitalizing one day, or you just plain don’t, and cease to be.  Ashes to ashes, dust to dust – or to be digitally archived and everlasting…we can come up with all kinds of new and exciting technologies and ideas, but the people behind it all…their motivations and what makes the machine keep turnin’ – that IS “All The Same,” and it’s always gonna be “All The Same.”

Anyhow.  I think it’s fair to assume that Simple Stone’s new song ain’t about what does or doesn’t happen to Bruce Willis’ face, or anything in my intro for that matter really…though the lyrical line of, “one idea can be the difference, one idea can be absurd” at least makes it qualify…or prove their point even more.  Y’all know what Simple Stone is all about though – right?  They’re here to ROCK, and they’ve never had a problem when it comes to entertaining ya through a solid mix of substance and style in their music.  “All The Same” is a quality cut, no doubt about that – this band executes with the best of’em, and holds nothing back when it comes time to perform or push record.  I’m not really here to argue that “All The Same” is making massive strides forward for the genre itself, or even for Simple Stone when it comes right down to it – it’s a fairly lateral move in that regard, but they do their thing & they do it well.

A sign of what’s to come & what you can expect from them – “All The Same” is also the lead-single from their second full-length record coming soon, called Through This Dark.  Now…I might not be the world’s biggest straight-ahead Rock fan when it comes right down to it, but I can certainly identify who is putting passion & skill into what they do and who ain’t – Simple Stone isn’t the kind of band that I worry about.  These guys know exactly what they want to create, follow that plan to the letter, and execute with such resounding professionalism, that it helps them get the maximum results out of every moment in their music every time.  At least for as long as I’ve personally been listening, which traces back to somewhere in 2020 with singles like “Not Pretty Enough” and “THE SICKNESS” from later in that same year.  And so there you have it…straight from my experience directly, I can confirm – Simple Stone has been on solid ground from the first moments I was listening, and their consistency continues on to this very day now.

The dynamics are great…they’ve got hooks that work…their musicianship & vocals are stellar…if you’re a fan of real Rock music, there really shouldn’t be anything stoppin’ ya from diggin’ on what Simple Stone comes up with, or this shiny new single here called “All The Same.”  Have I got concerns?  Advice?  Not too much…ultimately, I think every Rock band has to really fight the battle to avoid drowning in the sea of sameness, and in order to do that effectively, it’s gotta be something that’s a genuine priority and at the top of mind every single time you’re creating a new song.  Because fundamentally, I don’t think that any of us want to be “All The Same” as everything else, but it really doesn’t matter who ya are or how good you can do what you do – the reality is shared across the board for everyone inside a genre with such an extensive history…it’s TOUGH to stand out.  I ain’t gonna say that it’s ALL been done, because I’ll never believe that – but it’s also fair to say that a LOT of it has been, and that it’s become extremely hard to figure out how to do something altogether new with the Rock genre.  So while I don’t know that “All The Same” is really going to feel that different from what’s out there & what has existed in the past, by that same token, the best thing you can do in that scenario is to do what you do the very best you can do it, and I feel like that’s where Simple Stone shines the brightest.  There’s absolutely no question about the monumental effort they put in to making things as entertaining & professional as they can for ya…and that’s crucial to longevity in this whole music business.  You regular readers know what I always say around here on these pages of ours – if YOU are into what you do, believe me, it’s safe to say that others out there around the world will be too.  Simple Stone puts themselves in a great position to make new fans and retain their previous ones each time they put something out, because you can completely hear how much it means to them…they’re putting their heart into it all, and in my opinion, that matters.

I can confirm that I’m not alone in that assessment – I know it matters to a ton of you listening too, and you’ll be stoked to have a band on your playlist like Simple Stone that never lets you down in the quality of their execution, the unity in the way they play together, and creating scorching Rock you can rely on.

Find out more about Simple Stone from their official website at:  https://www.simplestoneband.com.au