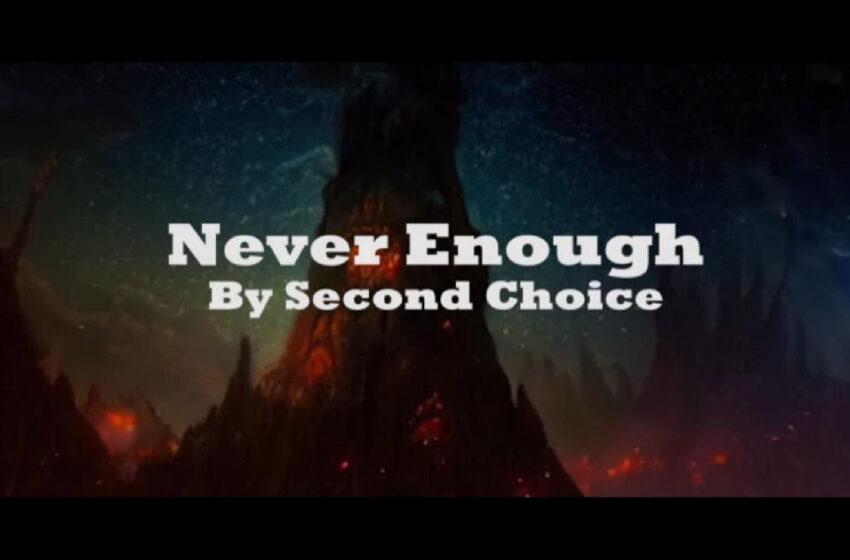 You just never know what you’re going to find in the Second Choice catalog of tunes.  From the mind of songwriter Fredrik Lindström – it’s clear this dude likes a whole bunch of different things in music he creates, and I know I appreciate that as a person that likes a whole lot of variation himself as a listener.  You might remember Second Choice from our pages & songs we’ve reviewed in the past like “Sad” from 2020, and “Fade Away” from earlier this year…and now it seems like good ol’ Fredrik has unloaded a whole bunch more onto the internet he’s looking for feedback on.  So I’ve got five tracks from various points in the past two years, all of which are new to me – let’s push play and check these out, shall we?

“Man Of Shadows” has an excellent lyric video to go along with it, and the robust vocals of Berzan Önen at the helm to sing this song for ya.  Not a bad tune if you ask me…apparently according to legend it was written back in the late 90s, some twenty-five years ago, with fellow band-mate Joachim Ebertsson at the time.  It’s interesting to listen to now…because it wouldn’t have really been in-sync with what was happening back in the late 90s, and it’s still not really what’s happening out there now either on the surface of the mainstream…but it’s kind of got that rustic, tried, tested & true solid slow-burning Rock feel to it that always seems to have a place no matter what era we’re living in.  Sounds good enough to me…Rock’s always my toughest genre to critique and equally the toughest to stand out in for doing things any differently than the thousands-upon-thousands of bands that have come long before we got here…but yeah, “Man Of Shadows” is alright.  The performances really give this track a shot at reaching an audience more-so than any of the hooks will, you follow me?  Berzan Önen does a really great job of finding the right gear between expressive & performance-minded without being melodramatic about it all…and I feel like he’s pretty much the main star of the show when it comes to this first track of this set.

“Warlord” actually traces back even further in time…thirty years ago according to the write-up at the Second Choice channel at YouTube, which would put that around 1991-ish if my math is correct.  And that’s a bit closer to the era of sound that we’d be looking at…just after the Hair-Metal of the 80s and before Grunge officially kicked in – you could basically get away with anything during that time as a creator as the world itself didn’t really know what the next big thing was going to be at that point.  I’m gonna go with Fredrik’s lyricism being the main thing I dig about “Warlord” though…more based around my own personal taste than any faults you’d find in the performances.  Of which, incidentally, I don’t think there actually ARE any flaws to be found…so it’s really up to our own personal taste as individuals than it would be anything else.  I’ve never really been the Metal/Rock dude to begin with, and the further we go back, the less likely I am to connect with the material usually…so I felt like that was a bit of a factor here for me, but you might not.  Ebertsson was also a part of the music for this tune too, and you’ve got Berzan back on the mic doing what he does…”Warlord” is one of those hard songs to examine because it’s really not so much about the hooks so much as it’s about the message and being an anti-war song.  I’m an anti-war guy myself, so it’s easy for me to dig into “Warlord” on a lyrical basis, but much tougher for me to love this tune all-around given that it’s a style of Rock/Metal that I don’t find myself tuning into all that often.  Kind of been there and done that for me sound-wise, but when it comes to the theme of the lyrics and what Second Choice is saying here, it’s as relevant as it’s ever been.

“Fade Away.”  Sigh.  This is one of those hard moments where I have to be like – bro – do you even read the reviews I write?  You’re completely welcome to revisit what I had to say about “Fade Away” back in June when I wrote about it earlier this year…but I don’t really feel the need to re-comment on a bunch of stuff I’ve already said that I’d still stand behind now.  I get this kind of request every once in a while though in my line of work as a music journalist.  Sometimes artists forget they already sent something, and sometimes they genuinely want to see if WE remember.  But I always remember Fredrik, just in case that’s what you were wondering…”Fade Away” is a quality tune – it was then, it is now, and you can read all about it in the previous review here.

For myself, I think what we hear in “This World” probably represents the best of the set, at least in my opinion.  It’s still somewhat difficult to assess whether it would or wouldn’t catch on enough with the masses out there…there are hooks yes, just not so much the typical ones you stumble upon every day.  Second Choice creates a murkier & dark kind of vibe, which to be fair, is completely a reflection of the world they’re writing about & surrounds us daily…they’re not exactly choosing to dwell on the happier side of “This World” and I can’t say I blame them at all.  In fact, I salute them for using the platform they have to help educate the masses as best they can, or create some awareness about how things ain’t exactly all that good out there for a whole lot of people right now…and that with the tiniest bit of effort from those in power, government, and in charge – they could be.  The reality is, “This World” chooses to be a cold & cruel bitch…and so no, I don’t blame Second Choice’s sound being a bit shrouded in angst to be entirely their fault…it’s a natural product of the subject matter they choose to write about.  If you want a nice fluffy Pop song, there’s plenty of’em out there…last I checked there’s no shortage on those.  Anyhow.  “This World” to me still stands the best chance of catching some attention for Second Choice, largely due to a more updated sound overall in terms of the writing and approach…”This World” sounds newer, plain and simple.  Another amazing lyric video to go with it too…visual support is always a bonus.  Fredrik’s done an exceptional job with the words on this track and given a voice to the voiceless out there in this society we share, Berzan does a remarkable job with the verses and crushes it in the chorus.  I might still not think that the hooks are going to be effective enough when it comes to convincing the majority of the masses perhaps…but to me, there were plenty of memorable aspects to “This World” that would make this song worth coming back to for another spin or two.  I like the choices being made here…structurally, sonically, and in the message itself…”This World” is thought-provoking infotainment.

What’s absolutely true, from what I can hear in these songs, is that Fredrik has a really smart mind and a genuine grip on the real pulse of the planet…there’s no gaslighting this man, he sees through the bullshit and knows what’s really going on.  The newest single from Second Choice, “Never Enough” is probably the most apparent example…it’s a track that directly takes on greed in all forms and draws the line from there to power & how it corrupts.  And the man ain’t wrong from what I can tell…he’s highly observant, but perhaps most importantly, he uses his music as a weapon for change.  Songs like “Never Enough” are designed to be evocative and create the kind of awareness needed to shake the people from their slumber…and hopefully, it helps move the needle ever so slightly in the right direction.  Berzan gives another one of his highly-charged, performance-minded turns on the mic singing this song, and Fredrik has given the music an aggressive mix of angst-ridden vibes once again that suits the subject matter.  It’s the kind of theme that should make you angry – not because you disagree with it, but actually because you agree with it ALL.  Greed has consumed this planet and just about everything that ever made it once beautiful…and it’s pretty damn hard to not be angry about that every single day we’re alive & not doing something significant to reverse that process.  Alas, we’re here, and we’re already essentially doomed from this point forward with little that can actually be done to stop the machine we created from eating us alive…”so go on take everything, impose your greed on the starving.”  “Never Enough” would be up there with my favorites in this particular set of five singles too.  While it’s clear this world is burning up from the inside out, hopefully, Second Choice gets their proper due before it does – they’re on the right track and their latest cuts sound the most relevant while delivering their most potent messages to-date.

Listen to more music by Second Choice at Spotify:  https://open.spotify.com/artist/0qv2OePpWQJyyuD8etdtvh