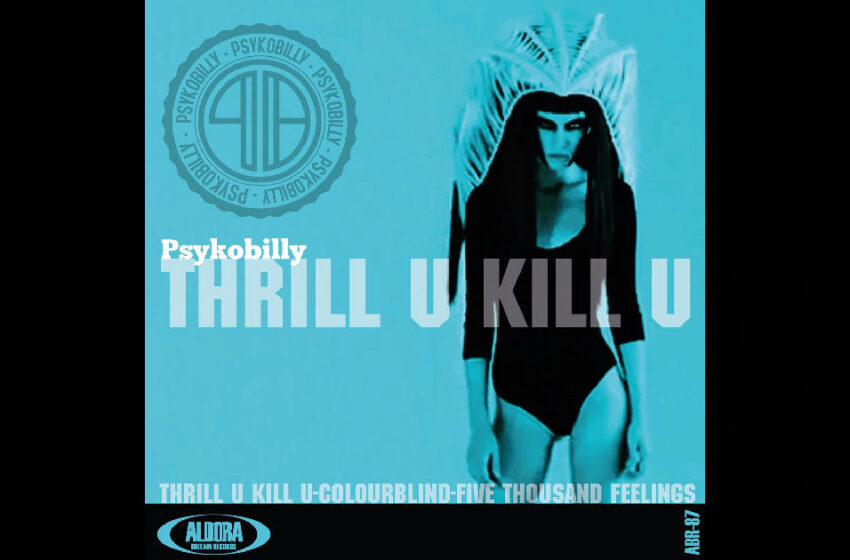 You just never really know what you’re gonna get the next time ya click on a track by Psykobilly, the versatility & creativity in this band has led it into all kinds of different styles & sounds we’ve heard in the past from singles like “The Invisible Man” and their album Black Candle from earlier this year – and there’s no question that this new cut “Thrill U Kill U” confirms their adventurous nature leads to results.

You’ll see a couple of great references listed on the Bandcamp page of Aldora Britain Records where “Thrill U Kill U” is posted up – it reads: “For fans of Suicide, Pink Floyd, and T. Rex” – and you’ll definitely hear some of those influences roam throughout the lineup of three songs to be found on this release.  Accompanying the main single “Thrill U Kill U” are “Colourblind” & “Five Thousand Feelings #1” – two cuts sliced from the lineup of Black Candle, and great choices to go along with the new song to give the people out there a wider snapshot into the diverse sound of Psykobilly.  Excellent choices really – I can personally vouch for those two very songs being two of my own favorites from that album of theirs.  When it comes to the latest single, Suicide is definitely apt & that influence comes through clearly…you might even feel a little T.Rex spirit buried underneath the surface too…but chances are you’ll feel like I did when it comes to the overall sound of “Thrill U Kill U,” & come to the conclusion that the closest comparison this time around, might actually be The Smiths.  Considering that both bands hail from the UK, you gotta assume that’s a pretty natural influence at least by proxy, if not for the countless legendary songs The Smiths provided music throughout their vast history.

With their synth-wave style in full-effect, Psykobilly takes ya deep into an atmosphere of pulsing sounds that plays with an addictive rhythm & groove that practically demands a whole lot of glow in the dark fun & flashing strobe lights to go along with it.  Bill Newton gives you a stoic & steady performance in the lead vocals that brings the spirit of the Post-Punk sound throughout the verses, and lightens it up just enough in the chorus to give the hooks a larger, but still subtle AF, melodic edge to their advantage.  “Thrill U Kill U” plays like a perfect representation of an underground freakout party from the 60s/70s; and at the same time, when you examine its DNA to the core, you find a song like this is a real hybrid that expands even further to include a modern digital edge, accessible hooks, & a wicked mix of energy that contrasts awesomely with the smooth demeanor of the vocals against the collage of colorful sound surrounding Bill as he’s singing this tune.  It’s almost like he’s directly in the eye of the hurricane that Psykobilly has both encouraged & brought upon themselves; right in the center of the spotlight, but also somehow impervious to all the exquisite madness & mayhem whirling around him on “Thrill U Kill U.”  Contrast is quite often one of the most underused & underrated aspects of what makes music become the sensory experience it can be – and using its inherent dynamics like the asset they are, leads to songs like this that explore a rad array of multiple energies that converge together & complement each other.

But hey…let’s be real here…there’s no I in team, right?  Psykobilly’s lineup of talent shows how deep it can run throughout this entire song and “Thrill U Kill U” reveals an impeccable balance of strengths shared between them all.  For instance…according to what I’m seeing here online, you’ve got Phil Sorrell making the magic happen on…hmmm…just about everything really when it comes to the music & production of this single as far as I can tell.  Dude should be proud of this on a structural & composition level…I don’t wanna get too nerdy in reviewing a track as sleek & stylistically cool as this is, but suffice it to say that the design of the music can’t help but stand out, and the production is as tight as tight can be.  The sound-selection, the precision placement, and staggeringly vibrant energy this single explores is attention-grabbing at the very least, and relentlessly addictive at its max – it’s safe to say Psykobilly is on pretty damn solid ground with the effort they’ve put into rounding out all the corners & loading “Thrill U Kill U” up with wild digital details from start to finish.  This band has so far always come up with engaging & entertaining tunes…but I still can’t help but feel like they’ve raised the bar for themselves with this new single.  That’s the thing about Psykobilly and good ol’ Bill & Phil…they’re good guys, they’re obviously dedicated musicians, and they come up with great songs…

Look out ladies & gentlemen – Isabelle Sorrell is charging full speed towards the ring right now, swinging a broken lawn-chair wildly above her head, and it appears that this match here ain’t over yet folks!

Alright…I might have made the broken lawn-chair part up, but I have little to no doubt that she practically all-out steals the show right from under these guys with the performance Isabelle puts in and how cleverly her vocals are laced into the mix of this single.  She brings an outstanding energy to this tune every time she shows up…I have no idea if that’s her freaking out at the beginning of this cut prior to the first verse or not, I’m assuming it is, and in either case, bonus points for that moment – it’s a stellar lead-in to the cut as it breaks into its main ideas.  Isabelle and Bill handle the vocals of “Thrill U Kill U” like the true professionals they are…I wouldn’t change anything about their performances – they’ve both locked into the exact kind of vibes that suit this song perfectly with how they’ve approached the vocals in this song.  The harmonies and backing vocals that’ll show up…I mean, this is ESSENTIAL stuff…and with everything going on, you might not even realize just how much of the melody & what you love about this song is literally coming from the microphone just as much as it is the music.  I think they’ve done a great job all-around, there’s no doubt about that – but would it be AS fantastic without the supercharged charisma that Isabelle brings to “Thrill U Kill U?”  That’s a real good question – but thankfully it’s not one we have to answer in this scenario – the fact is that she’s here, she’s kicking out the jams on “Thrill U Kill U,” and her parts are the real icing on a cake you were most likely going to enjoy already, but are now inclined to devour ravenously.  Everything falls into place where it should be for Psykobilly this time around – “Thrill U Kill U” is a compelling, quality single that represents this band exceptionally well & will no doubt have many out there looking forward to their upcoming album ahead.