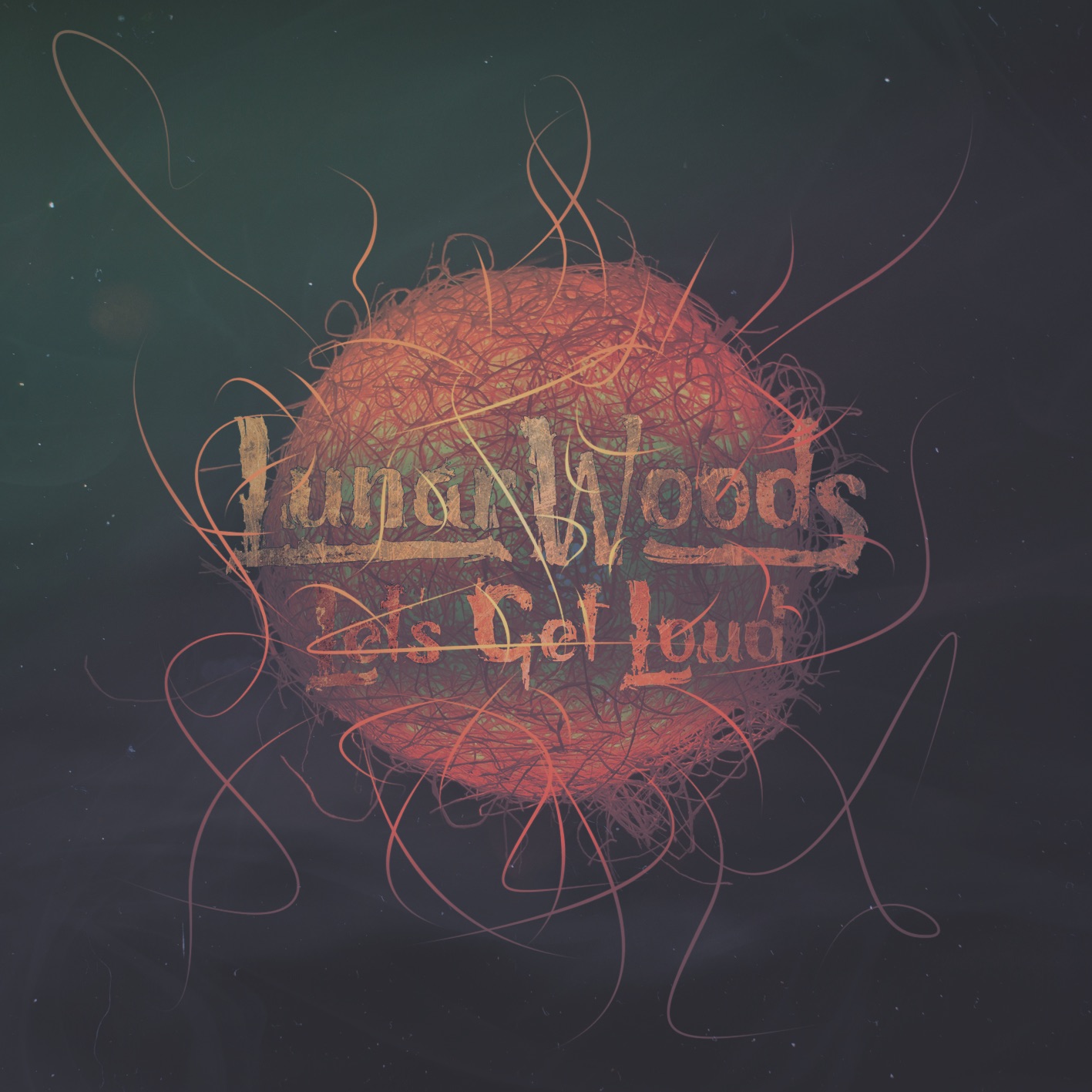 Fawk!  What a perfect title for an album from this reliably-loud grunge/alt-rock band from Russia!  I first got turned on to the music of Lunar Woods not too long ago…and I haven’t looked back since.  I’ve played them proudly on the SBS Podcast, and I genuinely support this crew as best I can from my tiny internet-soapbox all the way over here in Canada.  When I saw that this band had a brand-new record out, I was stoked to say the least; from what little I know about them, I know the band works incredibly hard to create some seriously entertaining music that truly holds up over time.  That being said…being stoked about a new record can often lead to mixed feelings when you first listen to it…and you ALL know what I mean; we’ve all listened to music by our favorite bands that’s left us scratching our heads as to what they were thinking, then been hooked on that same music only days or weeks later.  My personal hopes were pretty damn high for Lunar Woods…and I’m very proud to say they’ve exceeded any expectations I’ve had once again with a thrilling new album they’ve aptly titled Let’s Get Loud.

For every moment of grunge-influenced rock on this record, there’s just as much art to the craft and sheer adventure in the music, to the point where it almost has a progressive-feel to the writing at points.  Of course Lunar Woods stays true to their style and roots, but at the same time they’re now venturing into some seriously entertaining terrain with their music that resembles some of the artistic merit of a band like Jane’s Addiction.  So rest assured, you’re in for much more than three-chords and a melody on this new record from Lunar Woods – they’ve really put together some impressive compositions on Let’s Get Loud, an album you definitely want to turn right up immediately.

The winding grind of “Freedom For What?” starts the album on a huge high-note that really rocks the fuck right out & really lets us all know that this band is indeed back in business and ready to entertain.  Armed with serious distortion, “Freedom For What?” questions privilege through its lyricism and what we do/don’t-do with the freedom we so often take for granted.  This opening track has a defined point of view and something to say…and musically this band comes out rumbling with intensity and supercharged energy at the beginning of Let’s Get Loud.  A gripping first-track that definitely has you believing quickly that you’re about to hear the best record this band has put together to-date.

I was going to note the Rage Against The Machine sound on “Snakecharmer” – but I suppose it’s a little obvious when it’s an actual cover-song.  So any comparisons to RATM are pretty natural in this particular situation, though Lunar Woods has displayed their influence in their past-music as well.   They do this cover extreme justice…seriously…it would take a shitload of effort to make me want to say that when comparing anyone to the brilliance of RATM – but in all honesty, Lunar Woods has crushed this one as perfectly as an empty beercan on a redneck’s forehead.  The enormity of this cover-version is absolutely MASSIVE in sound and the entire band sounds so wickedly enthusiastic and amped-up to bring their own talent to this track that it comes out sounding like a serious winner.  Overall I think it’s a very interesting choice…I’ve always been a huge fan of RATM, but I wouldn’t think “Snakecharmer” would have been the first song anyone would rush to cover from the band…and I think that’s always a great idea to do, if you can help yourself!  It’s quite often seriously tough to resist recording the bigger-hits when covering a song in general happens so infrequently and more popular songs tend to equate to large hit-counts even without effort – so I really do respect a choice like this.  That being said…if they DIDN’T pull this one off so incredibly well I’d be likely to skewer them here in this review, no matter how much I like this band!  Thankfully Lunar Woods didn’t make me go down that road and I’d give this band the solid-stamp of approval and say they’re one of the very few bands out there that I’ve heard really do an RATM song RIGHT.  “Snakecharmer” pounds from moment one and pours on the heat as it builds & plays.  Notably, the toughest thing to often bring to a Rage song is the vocal-aspect – these vocals from Ilya Fokin deserve a serious amount of credit for being so acceptably different – I love what he’s done on this cover, it’s a perfect fit in sound, tone and energy.

Where things felt like they started to take an even more audibly fantastic-turn was the song called “A Brand New Story” – right around here is where that Jane’s Addiction-esque influence sound creeps into the music and really fills-up the atmosphere.  Fokin sounds spectacular as the song leads from verse into chorus…great additional keyboard work puts perfect highlights on the melody, and overall “A Brand New Story” is one of the more intense adventures into the depths of the Lunar Woods sound that we’ve had the privilege of hearing.  Easily one of the strongest tunes on this record – “A Brand New Story” is as solid as cold-steel with lyrics that echo the isolated & tense feeling of the distance in the music.

Now…keep in mind…these guys are Russian-dudes singing their songs in English, so in my opinion you’ve gotta forgive the occasional song that simplifies the vocals like “Take Me Home” does.  In this track, when they’re not yelling at you directly, they’re actually seriously rhythmic, hypnotic and pleasant to listen to!  I mean…I find the yelling just as comfortable personally in a really odd way…but you know, for everyone ELSE out there, “Take Me Home” has a lot of crossover appeal in that chorus melody.  The thickness of the low-end between the bass of Aleksey Trefilov and the guitars of Fokin match the punch to the drums wickedly in this tune…it’s a pretty damn extreme contrast between these two main parts of the song, but I think both have their own merit individually.  It lives up to the album’s title for sure in the verse…this song gets real loud after inviting you in coyly with such a sweetened melody.  Tricksters.

If anything, I felt the title-track was missing a little something!  Maybe this one came out a little too-slicked out through the vocals in a few spots where I’d be hoping for a little bit more of a grungy, dirty sound up-front to make the music a bit more.  One of the best pieces of advice I was ever given in my own music was that, if I was going to swear…I should mean it.  It either had to exist powerfully within the words themselves, or it needed to be expressed with some power and feeling behind it…and I think that’s a little bit of what this song needed when it came to the chorus.  I liked the initial scale up the ‘Let’s get loud’ chorus…but the follow-up of ‘Let’s get fucking loud’ sounded like it was holding back the madness of that moment in favor of control over the tone.  So…in a sense, it sounds good…but at the same time I think that to give this track the punch it needed, that was the spot to do it in.  Musically, Lunar Woods has created a pretty big, burly and beastly rhythm and heavy groove-rock laden track here with a lot of twists and turns that show real ambition in the writing.  There’s lots to appreciate…I’m just greedy and always want MORE, that’s all.

Where things get right back on track, is the genius grind and melody combination of “F.F.W.” – this track is rock-solid from tip to toe.  I had to really look into this one – at first I thought they had posted up the words to their opening-track “Freedom For What” until I realized of course, that “F.F.W.” might just maybe (yes in fact, I’m sure it does) stand for “Freedom For What.”  I dig the second treatment to this tune…I really like the focus overall on the incredible guitar sounds that rock through this song…really liked the effects on the vocals as well.  Proving that a great song can live two separate but effective lives and exist on the same record, this was a completely welcome sound the second time around and different enough than the album’s opening version that it ends up feeling like you’re listening to a completely different tune.

One of the main songs that pulled me into the Lunar Woods sound was released as a single just a couple months back, called “The Story.”  Surfacing here towards the end of Let’s Get Loud – this anthem-huge grunged-up rock-track is still as wild, menacing and vibrant as it was the first time I heard it.  I love the drifting melody of this track and how well it transitions into the ensuing mayhem of the chorus.  Igor Ketov makes a noteworthy happen on this track and really hits each drum with power and precision in tone…great mix on this tune and record overall really.  The work has been put into this album and you can hear it completely through the depth of clarity and extreme sounds all mixed together solidly throughout Let’s Get Loud.  You can check out my thoughts from reviewing their single “The Story” when it was first put out to tease us all right here.

The final track on the record, “The Tricky World” is also perhaps the largest departure in the overall sound of the album.  A good hint at what this band is capable of when it adds a bit of smoothness to their grunge-rock style, this last tune comes out sounding a little bit closer to something like Lifehouse with its inviting melody and chilled-vibe to the vocals.  Synth-led for the most part, the band plays and builds solidly around this final melody until the sound is full and satisfying once again, only this time in lighter-tones than the rest.  Lyrically, it still comments heavily on emotions, but the surrounding music is inviting as it asks and reflects on thought-provoking questions about how we fit into the world, if we do at all.  It’s been an entire album’s worth of tunes that have impressively been weaving through different textures, tones and a whole range of sound.  Great to have Lunar Woods back on the ol’ playlist – definitely music I look forward to and they certainly didn’t disappoint with Let’s Get Loud, it’s a wicked record to listen to.