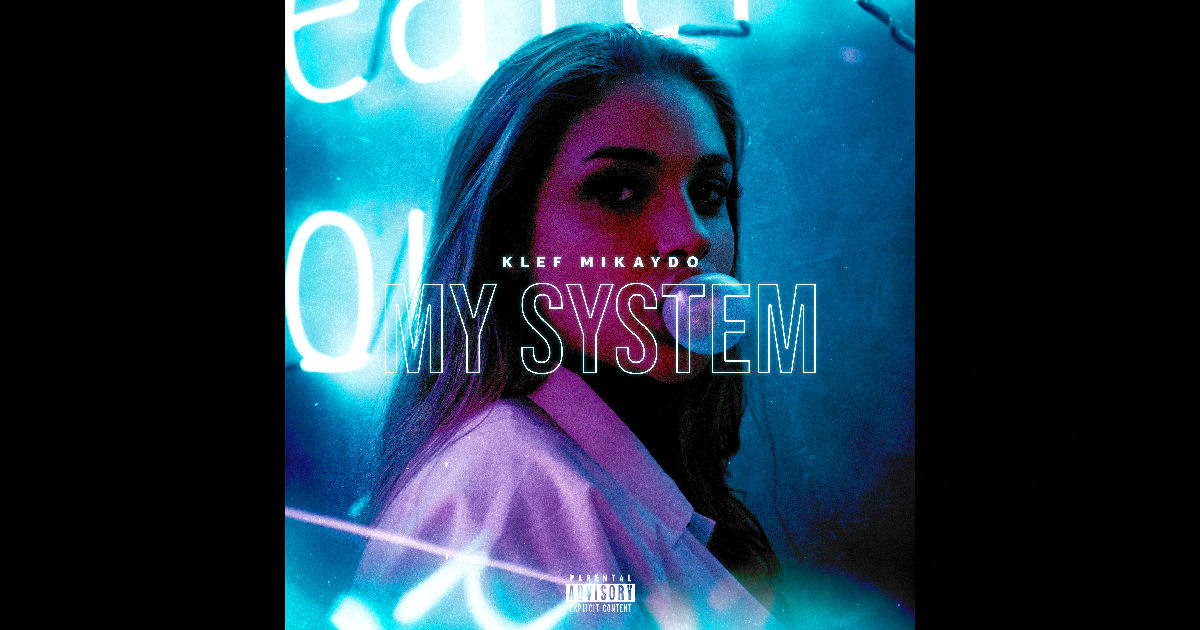 Hey!  Synchronicity dear readers, dear friends – we were just spinning a cut from Klef Mikaydo last month on the SBS Podcast when we played one of his 2018 singles that we reviewed here at the pages, called “Purple Clouds” on our show – and then just like that, the man appears on the ol’ playlist with a brand-new joint for 2019.  Y’all know Mikaydo’s name by now – we’ve featured his innovative style & versatile sound up on our pages here multiple times now, dating back as far as summer 2018 and the guy is clearly still heatin’ up.  We checked out his track “Showtime” at the end of last year and the man was continuing to excel with his music, now he’s back in 2019, steamin’ it up on his brand-new single called “My System.”  In keeping with Klef’s signature style of saying exactly what he wants to & exactly how he wants to say it – there’s never been a single sent our way from Mikaydo that hasn’t come with a ‘Parental Advisory’ label attached to it – and true to form, “My System” maintains that standard, 100%.

And if you’ve read those past reviews we’ve written on Klef’s music here, you’ll know there’s pretty much only one thang on his mind, 24/7, every day of the year, at all times, without exception – and that’s dat booty y’all.  Mikaydo writes about life between the sheets for the most part…you might say that’s his niche when it comes to his music, and from the details, sounds like it’s his hobby in everyday life, know what I mean?  He never seems to be short on information, details, imagery, or experience to pass on to us all from the mic…I’d say it’s pretty safe to say that the words you hear from Klef represent the lifestyle he’s livin’ outside of his time in the studio.  This is what you call that ‘real life’ material, based on his own wild experiences; and chances are, there’s more than a few of you that can relate to the story he’ll weave into his latest – “My System” tells it like it is & what it’s like when you can’t get someone out of your mind.  Whether that’s at the perfect time in life, or a tricky situation like Klef relays through the words he’s written into “My System,” most of us have all experienced being hung-up on someone at some point in time in our lives.  Mikaydo reminds us why it’s important to keep your guard up and your game strong at all times – especially those of you out there with a special someone of your own…because if you start slippin’ in the slightest, Klef might slide right in and snatch your lady from ya.

Don’t get caught sleeping – on “My System,” he’s laying all that right out there straight in the words, tellin’ ya so & giving you the blueprint on how it all goes down.  If you’re not lovin’ your ladies right gentlemen…you’re at risk – Klef’s prepared to show them the good-times they’re looking for if you’re not.  “My System” gets as explicit & detailed as you’d expect from Mikaydo at this point if you’re familiar with his music – but like I’ve been saying, even with the flashy, designer, & stylistic modern-day sound he’s got, what Klef sings about always ends up sounding real and authentic.  And as I’m sure I must’ve said or offered by now, if he wants to trade lives with me for a day or two, I’m down for that any time.  When you listen to these tales from between the sheets that Mikaydo creates – believe me, you’ll feel those pangs of envy or jealousy…this man is clearly livin’ a really damn good life & lovin’ every minute.

And while you can hear how focusing-in on one specific lady has left him struggling to find a way to get her out of his system…it’s clear as well that the good in that situation has far outweighed whatever the bad might be, or any consequences that might occur through the act of jumpin’ on in between two people in an existing relationship & being that other man.  But that’s just the thing on “My System” – Klef ain’t just looking to be the other man – he’s looking to be THE man…and I gotta say, he makes a good case for himself throughout the lyrics of this new single.  He makes moves vocally that’ll get noticed, he writes words that’ll definitely get the eyebrows raised up or the lights turned down low – Klef’s sounding in fine form on “My System,” hittin’ the mark with precision & professionalism locked-in to the mix from performance to production.

Though…just how much he’s struggling to get this girl out of his system, or how much he’s ultimately ready to commit to ‘the one’ – well…that’s gonna be up for debate.  I ain’t sayin’ he’s exactly ready to hang up the spurs just yet or stop roamin’ the clubs lookin’ for some poon by any stretch – but are my ears mistaken, or does he actually sing out loud, these very words in “My System,” that say:  “We can go half on a baby?”  He just said that…right?  My ears are working correctly here, yes?  So…I mean…that’s actually quite a huge statement for this seasoned veteran of V-J hunting, for real…to think that he’d be willing to settle down, with ANY one person and feel like he could be satisfied with that…MAYBE speaks to Klef getting more mature & grown-up in a quest for commitment – and wouldn’t that be the ultimate twist here?  It certainly wouldn’t be the move you’d be expecting from Klef…but at the end of the day, when he does find ‘the one’ – it’ll be the fact that he’s willing to make such a bold move and take on that 50% of creatin’ a kid so sincerely, that’ll show he’s serious, you feelin’ me?  Obviously I’m talkin’ about the relationship part of all this…you can tell from every word he sings & spits that he’s serious about what he’s writing about; if this cut is directed to the ears of one specific person, it’s hard to say for sure…it could be…and if that’s the case, you can only hope they hear it.  Klef’s clearly puttin’ a lot of the feels straight into the microphone on “My System” in a genuine plea to get these thoughts & emotions acknowledged from the other-side of the equation…I think you gotta respect the boldness in how he goes about all that & puts all this into words.

And again, you can only hope that if this IS in fact based on real-life experience, like so much of his music has always been, that the man has made his case to the lady he loves in a way that she’ll truly hear it.

“My System” officially drops online tomorrow on the 24th!

Find music and info on Klef Mikaydo at the official links below yo!