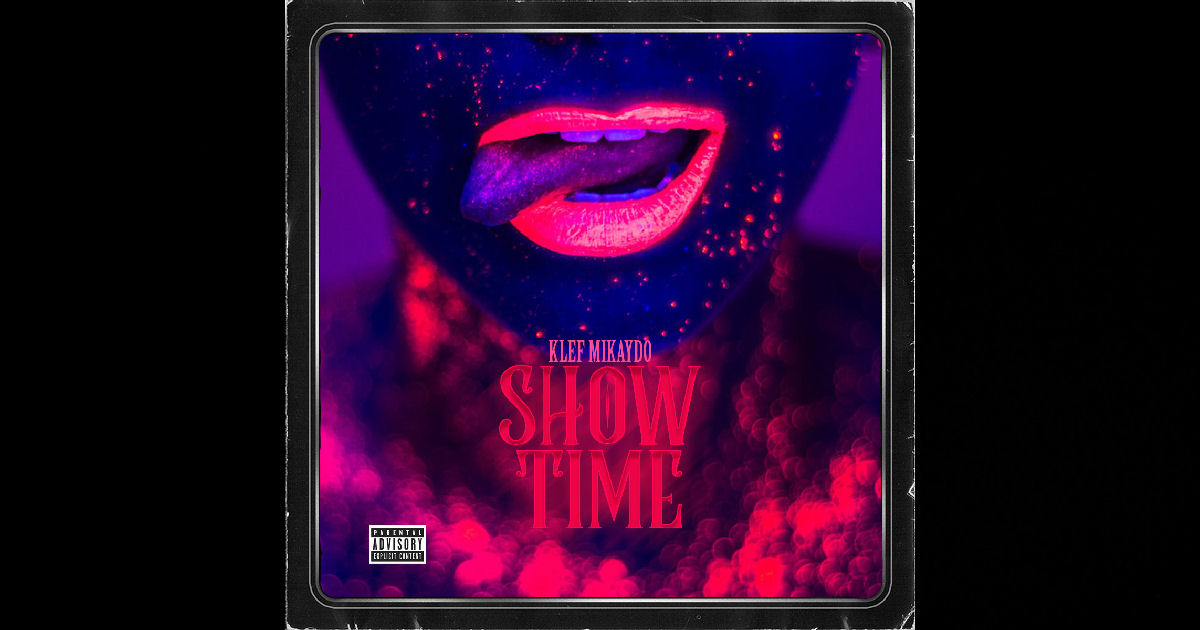 Klef Mikaydo has a great grip on stylistic sound.  When we first got a chance to listen to him back in June this year with the release of a couple singles called “Last Night” and “Purple Clouds” – it became pretty clear pretty quickly that the flashy beats he was working with & confident way of putting himself out there in such a no-holds-barred style was stacking up to serious sounds that people would dig on for sure.  These two cuts revealed an artist that was unafraid of expressing whatever was on his mind – and as a result, we ended up with two singles that each took a distinct path of their own; one was about fuckin’ and the other was about smokin’ – all relevant stuff that I’m sure y’all relate to out there, even if it’s only on the weekends for some of ya.  The question this time around becomes, which Klef are we gettin’ today with his new single “Showtime” – let’s find out which…we fuckin’ or smokin’ homies?

I always find it interesting what the ears hear versus what’s actually being said.  99% of the time I end up writing a review, I’m relying on my own ears to get me by – it’s rare to have the lyrics in front of me, no matter where the music is coming from.  Klef’s probably too young & likely in the wrong genre to know about an old fight that happened between INXS and Oasis that came out of their lyrics being misheard in the hit song “Elegantly Wasted” where the vocal line of the hook “I’m elegantly wasted” somehow, when being twisted along the way, ended up sounding exactly like “I’m better than Oasis.”  Believe it or not, that ended up with two mainstream acts beefin.’  Seems like a stretch, but have a listen…you’ll probably hear it, even though it wasn’t ever actually in there.  Weird story to tell here I suppose, it just happened to come to my mind as I was listening to “Showtime,” where there’s a similar effect in the hooks of this cut…though thankfully one that’s not going to lead him to beefin’ with another emcee or anything like that.  I actually felt like it really ended up working in his favor…like I don’t know, it COULD be an intentional aspect of this song…it’s honestly hard to say, but let me give that a shot anyway…

Alright.  So.  To answer the first question before we move into this explanation – Klef is fuckin’ again.  He’s put down the blunts leading to the “Purple Clouds” he’s famous for, if only for a moment or two, and he’s on his way back in between the sheets to ‘go hard in the paint’ – y’all know what that means.  But here’s what’s seriously cool about the mishearing of lyrics and why this works to Klef’s advantage here on this single – ultimately, he’s making a large case for the fact that, when it comes to the bedroom, it’s all about YOU ladies…and you gotta love that right?  So…have a close listen to the way Klef rolls through the hooks of the chorus…it’s a simple phrase – “It’s showtime” – or at least that’s how it sounds, at first.  As he continues to loop & repeat that, it literally sounds like it morphs into “It’s yo time” – and then it almost seems like you get whichever of those two that your own brain would think fits better in the moment from there as you listen, even though he’s probably only ever saying “It’s showtime” – following me?  It might be a completely unintended byproduct that’s just naturally occurred in the flow of that hypnotic vibe & the effect of repetition, it could be that Klef fully knows that’s how this comes out & sounds to us…either way – that’s a rad part of how people might hear this tune, and thematically, it ends up providing a real subtle but brilliant extra layer to absorb.  For a song about lovin’ the ladies – hearing either “It’s showtime” or “It’s yo time” – they should both be highly enticing & invitational statements that should have you wanting to hit this guy’s parties up no matter which of these two claims you actually end up hearing, but regardless, it’s clear that Klef is a giver…he’s ready to make that moment magic for ya…much like he made known the last time around with the single “Last Night.”

“Kick it up, kick it back like Chun Li” is one of the deadliest lines I’ve heard in reference to fuckin’ without a doubt – that’s just brilliant imagery right there is what that is.  Klef, as I mentioned at the beginning, is never afraid to let you in on what he’s thinkin’ about…you’ll get a whole bunch of clever lines that detail more wild tales of debauchery & all-out good times on “Showtime.”  Let me put it to you this way – if you’re a man…and you’ve chosen to sit and home while your girl is out at the club…well…I hate to be the one to inform ya, but Klef is probably with your lady right now homie!  “Showtime” makes it clear he’s here to serve that booty the good night it deserves…and if you’re not there to supply, he will be.  Y’all have been warned – keep your game sharp or be prepared to watch Klef leave the club with your girl.

And from there…you guessed it…it’s “Showtime.”

Dig the flow, dig the sound & club-style beat, dig the theme, and dig that this guy keeps his focus up, both in the performance of the song and the performance on these nights he’s detailin’ for us.  Klef’s clearly on a mission to conquer the mic and conquest the ladies out there…the combination of which, between the energy in his vibe and the messages he’s puttin’ out there in his words…would be fillin’ up his calendar with umm…’appointments’ shall we say, for the future.  I mean you could almost accuse Klef of creating an advertisement or commercial on “Showtime” – one that tells you all about what a night with the man is gonna be like for ya…and like – for real…how slick is that combination as an artist?  That’s gotta pay off, one way or the other right?  Either he gets money from music, or he gets the ladies from being able to broadcast his intentions so clearly over the mic – I mean…recognize the smarts he’s puttin’ into his game y’all…he can’t lose here!

“Showtime” is catchy, confident, cool, and stylistic from beginning to end, furthering the story of what this artist is all about…or at the very least, what the main objectives are when Klef Mikaydo hits the club.  He sings it really well, the entire vibe is strong and sets the mood just the way you know ya want it – it’s a short cut at just over two-minutes that more than hints at a longer experience later on for you ladies – Klef is clearly on the prowl & ready to make moves in 2018…in the bedroom, and in his music, no doubt.

Find out more about Klef Mikaydo at his official page at Instagram:  https://www.instagram.com/klef_mikaydo