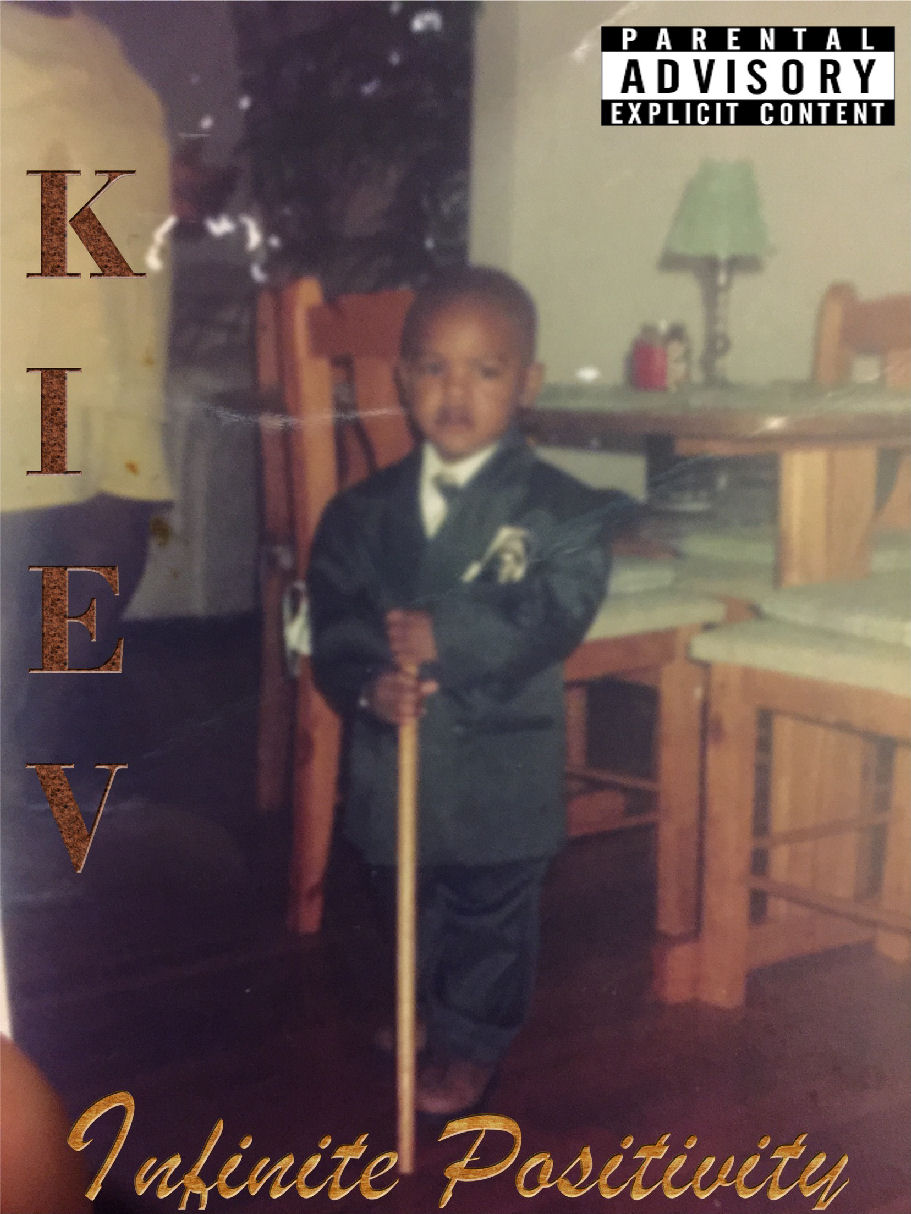 I think I’ve got the name of this EP correctly!  Slight difference between its label at Soundcloud and what you see on the cover…so I went with the official label I saw with the art…and besides, the message is largely the same whether it reads ‘infinitely positive’ or Infinite Positivity right?  Either way…you’ll quickly conclude that it’s not just a clever title that Kiev’s come up with – he lives these positive vibes.

Welcoming you personally with a quick spoken-word intro that highlights his intentions before he busts into a classic hip-hop flow & rhythmic lyrical style, it’s got respect for the old-school and the tone in his voice sounds tremendously committed & focused as the EP begins with “To The Top.”  Like the oldschoolers that have come before him, he mixes it up between serious & humorous…the music has matching uplifting tones and samples and the overall energy in the entire song is fantastic – sets a solid standard for the EP to live up to.  Smart vocal-mix to accompany the flow with a ton of accenting backup-vocals filling in the space around him to emphasize the rhythm in the rhyme – and all the care & effort pays off here through a seriously entertaining introduction to the Kiev style/sound.  Really dig the uniqueness of the music as well…the electro-jazzy combination really hits a smooth-gear and delivers big-time with its smart sample structure.  Good hooks in the chorus…solid progression throughout the song’s build & evolution…great start for Kiev’s Infinite Positivity.

Twisting words & syllables with ease into the metering & the music, Kiev winds and grinds slickly through the verses of “Night Show.”  He’s got a great flow once again, real personality in the delivery…that second verse was right ‘in the pocket’ as they say…he’s kicking all the ass verbally right there and flawless in the flow completely.  If I’m being truthful…I had a tougher time with the chorus on this one…whether it was guest-star Kobe or our main-man Kiev…both versions of their attempts create a contrasting tone to the music that was a bit jarring to listen to.  What’s missing in my opinion is a little power & energy to really hit the mark of the writing’s intentions…because the part itself is a strong one, the hook is a good one…the tone itself is just off by a bit in the chorus no matter who gives it a shot; it retains an organic sound & style that’s honest as a result, but I think another shot in the studio on this from both parties concerned could potentially improve the overall result.  As always, what’s most important is that the ideas are there…and Kiev’s clearly got plenty so we ain’t worried about that.

Kiev does really well in the flow of the jazzy-electro samples he’s working with…he raps with clarity and punch in his style, attitude and personality in the flow that you can truly hear – perhaps on best-display through the tale he tells through “The Art Of Music” featuring Serenity.  You gotta admire this track for what it becomes…real tales told with real swag; right around here on the EP was where I felt like the signature sound of Kiev’s style became even more identifiable.  Songwriting & lyricism are definitely in-check & on-point…”The Art Of Music” details the struggle of trying to make it in the music-industry – and honestly, the amount of detail in the story in the words here will make its own impression.  Take a listen to the emphasis & enthusiasm he’s got on the verse from about ninety-seconds on-forward…that’s attitude and personality, charisma & charm, and all on display over the mic in ways you can really hear that personal connection between Kiev & the music that makes it all work as well as it does.  What’s really interesting is the storyline on “The Art Of Music” – while it COULD be based in fiction…there’s a final parting-shot from guest-star Serenity that throws a hint out that this entire song might actually be about the rise & decline of star Wyclef Jean.  That MIGHT just be an assumption…I can’t say that for sure and I don’t know Wyclef well-enough to know if everything rapped about here are the gritty details of what happened to his career…but I’m not so sure I’m not correct about this either; that’s a pretty sly reference to Jean’s “Gone Til November” towards the end of the song…were it not for that, I’m not sure the connection would have been made.  For those familiar with the name of that hit-single…you’ll probably catch the reference first time around too…then you listen to it all a second or third time and recognize that the story COULD apply to Wyclef Jean…either way, it becomes a cautionary tale for sure, and one delivered with added thought, focus & precision in the lyricism.

With Kobe coming in to lend talents to “Who Am I?” to end the EP…I think it’s important to recognize what’s being done by Kiev here in his efforts to bring-up new talent and create a few believers on the m-i-c through these little homies.  Because I’ve got no doubt after hearing both Kobe and Serenity on the tracks they appear on, that they’re certainly still ‘new’ to the game; and that’s okay.  I felt like Kobe had a much better turn on “Who Am I?” than we previously experienced on “Night Show” – both performances have their moments but also reveal that ‘newness’ in the approach to the mic.  Here’s the thing though…ALL singers & emcees have those moments…but if those chances to improve aren’t afforded to us then chances are we just WON’T – and what Kiev’s doing here on this EP is obviously partly dedicated to help insert a bit of confidence into these new emcees and get them that experience that they need to continue on the right path they’re on.  It’s admirable…and I think it’s an important thing to do…and even while Kiev’s making that breakout on his own, he’s already ready to take others with him – and I think that truly says a lot about his character.  That being said…his own skill-level is of course noticeably more cultivated than the upcoming emcees he’s got featured and that is something that we can hear in the songs as they play; so whether he’s playing the hero at a potential cost to his own music is something that could be a factor here.  Love his verse on the final cut “Who Am I?” and really felt like he’s done a lot to really define his own style in ways that I’d remember the next time I hear what Kiev’s up to…I dig what he’s got going-on because these samples & beats he’s working with aren’t typical and he rhymes with a ton of skill, natural-flow and talent.  It’ll be interesting to see/hear how his next record turns out…the ideas are here and he’s got a good start with his Infinite Positivity EP; there’s definitely something here and I think this is an artist that could go on to surprise a lot of people with how far he’ll be able to take his music & career one day.  Bit of refinement & experience, a continuation of supporting and raising-up the talent around him and I’ve got confidence he’ll get to where he’s looking to go with his music for sure.