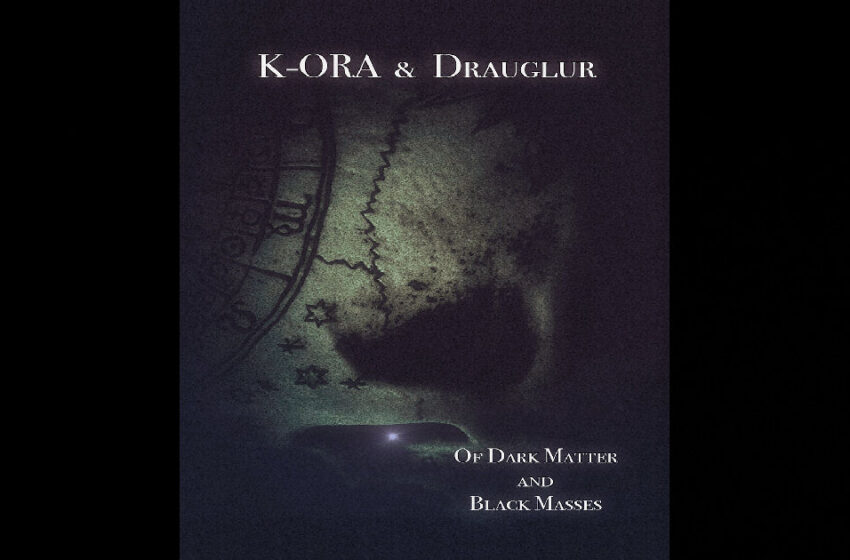 Perception of course, is reality…I’m not necessarily asking you to share mine specifically, but there’s a damn good chance you’re gonna feel the same way about this artist.  If you’ve been listening to the same records I’ve been checking out this year like Coaxial Constructs and Sphere 2020 from K-ORA, then you’re probably just fine with being a little creeped-out by the music you listen to…I’m big into sensory sound, vivid textures, and slithering vibes…and I don’t think I’m alone in that.  At the very least, we know we can count Drauglur in with us, given that this dude is hangin’ with K-ORA to collaborate on their new EP called Of Dark Matter And Black Masses, which officially dropped onto the net online November 1st.

If you have been listening like I’ve been listening…then it should come as no surprise at all that things sound as strange as you’d expect they would.  “Forgotten Machine Voices” is the first track on their new record, and it’s pretty much a stroke of audible genius if you’re into your soundscapes and whatnot.  I’ve never beat around the bush when it comes to what I think about any kind of music out there in any genre – K-ORA & Drauglur ain’t doin’ what they do to please the masses or your momma – they make the kind of music that they’re into, full-stop.  If you happen to dig it like I do, then bonus – but I doubt they expect that reaction to be the norm…it’s the freaks, geeks, weirdos, and outliers that are going to happily embrace songs like “Forgotten Machine Voices” and its atmospheric excellence the most by far.  And heck ya – if that’s the way you feel, you know I’ve got love for ya…clearly you’ve got great taste in music and you like to listen to something truly alternative to the rest of just about everything else that’s out there.  You can practically taste the metallic sound these two create…you feel the mysterious vibes they generate slide right underneath your skin…you want to turn all the lights on in your house to feel some modicum of safety as K-ORA and Drauglur invade your soul with subtle intensity from the lefts to the rights.  Their production is outstanding, their ideas are haunting, and their combined skills prove to serve them well – “Forgotten Machine Voices” has everything it needs, and leaves nothing out.  While it might appear somewhat bare-bones to many listeners out there…consider the fact that not everything we listen to needs a snazzy chorus or radio-friendly hooks – there’s an entire side of music that is much more about discovery, exploration, artistic freedom & unique creativity – and this is what these two use to their advantage.  “Forgotten Machines” crawls along slowly, but with purpose, and it’s memorable on a whole different level…like a feeling you get from listening that you couldn’t possibly wash off…ever.

As for “Into Your Mind I Go…” is concerned…I mean…like…damn – I don’t know if I can support the title of this track given the fact that it literally sounds like K-ORA and Drauglur are invading our minds and attempting to control our brainwaves through the dark arts of audible hypnosis…but alas, here we are, and whether they’ve already pulled that off and I can no longer help myself, or I just plain dig what I hear – you betcha…I like this track too.  I will say this…I do think that the case of K-ORA is really one of ‘if you like one, you’ll like them all’ – it’s that kind of material, where the deviation between what we hear from experience to experience isn’t as dramatic or noticeable as the vast majority of music by any artist or band is typically…and that might be something to consider.  As much as I appreciate having Drauglur along for the ride and lending talents all the way from across the planet way over in Germany…as to whether or not it ends up making such a difference to the K-ORA vibe we’re familiar with already – I dunno.  It’s a very similar style that is being created here from record to record, track to track; there are advantages in such methods of course…you can definitely build a devoted & loyal following by creating real identity like K-ORA and Drauglur have in their music for sure, but it’s a fine line to walk without risking restlessness in those out there listening.  I mean…I know that I would sit & listen to something like “Into Your Mind I Go…” all day long and never complain – but I ain’t the rule, I’m the exception.  I sit and listen to tracks like these from the Of Dark Matter And Black Masses EP and they practically beam imagery into my thoughts like I’m somehow watching a mini-movie just by staring straight ahead…which is…hmm…both unnerving, and kinda strange…I’ll admit that.  And yet – addictive too.  Like…we sit here, mesmerized, captivated, and fascinated by what we hear, even if we don’t fully understand it all, or have any idea whatsoever behind the motivations of what makes K-ORA and Drauglur do what they do.

It’s an intriguing kind of music…that much I can say with full confidence.  It’s substantial for the psyche & gives your brain something to chew on.  It’s mystery in music-form, and all achieved without them using a single word.  It’s different than so much of the rest of what’s out there, all by design…it’s played with purpose…it’s otherworldly, intentionally creepy…and it really is something else to experience all-around.

Find out more about K-ORA from the official page at Bandcamp:  https://k-ora.bandcamp.com

Find out more about Drauglur from the official page at Bandcamp:  https://drauglur.bandcamp.com