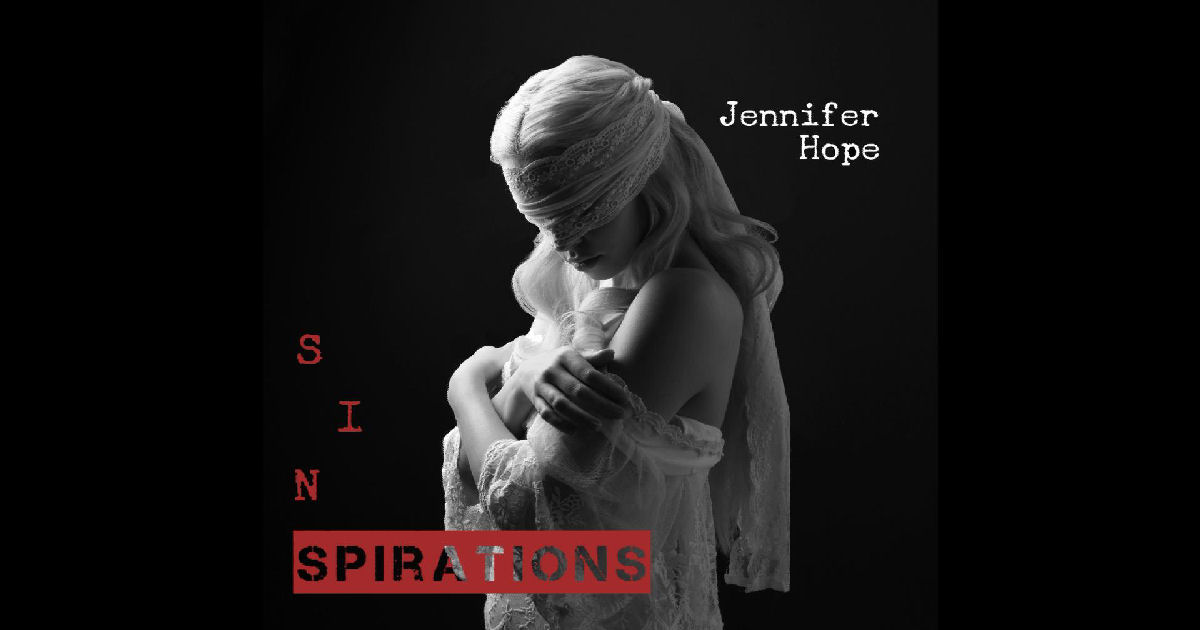 Ever since we first stumbled upon the music of Jennifer Hope and her incredible vocals, the most consistent thing across the board has been the settings & atmospheres she’s chosen to display the truly dynamic & versatile power she has in her voice.  From our initial review on her release of her cover/single “Bring Me To Life” to the last time we heard her on Linkin Park’s “My December” (which also appears on this EP!), Jennifer has always found a way to entertain through her own stunning performances, but also through the smart choices in finding songs that really work with her strengths.

And now we’re here…she’s got herself a full-on EP consisting of three cover-tunes and a brand-new original, all working various sounds & styles and putting different aspects of Jennifer’s charismatic vocals & characteristics out there in four separate ways.  You get a bit more freedom when it comes to a cover record in that sense; having a majority of cover tunes IS the cohesion, rather than focusing on making the EP sound necessarily any one way.  There are enough threads between the material to have these songs sit fairly comfortably next to each other – but the very nature of variety of course is also bound to lead people to connect with their favorites more readily than others.  The reverse, is true, as well – it can often be difficult for people to accept a cover song from their favorite artist/band done in a new style, sound or perspective.  I’ve always looked at it from the positive side; a ‘more of a good thing can always be a great thing’ kinda-thing.  I’m also one of those people that’s all for a brand-new remake of a movie I love already as well…even if the results aren’t up to the same standards, I think a great story is still a great story and a fresh perspective is always welcome to me – so too should it be, for all music.

The most unique and thereby perhaps most rewarding experience comes through her own intuition on the song “#1 Deadly Sin,” which, while maybe not as straightforward with traditional hooks, is loaded with character, charm and a genuinely captivating magic via the performance Jennifer puts in.  There’s a slight Celtic texture you can hear in the melody from the piano (Jeff Babko) that adds a mixture of sweet & haunting sound to the verses of “#1 Deadly Sin.”  I’ll say this…on the first few spins, it almost felt like she’s got two separate songs here on “#1 Deadly Sin” – the chorus lightens-up the song musically and takes it for a turn you probably aren’t expecting.  Once you get used to that switch coming, it becomes easier to accept – and both parts certainly have their own merit – it’s more of a case of a song having an extra layer of personality you likely wouldn’t expect it to have.  My ears and many other ears out there appreciate uniqueness like you’ll find in the parts Jennifer has written into “#1 Deadly Sin” – and while she might not be exactly catering to the radio with this particular idea, there is evidence to support the fact she’s writing based on a lot of what she’s seeing in movies & television.  This original track from Jennifer Hope is inspired by the primetime show Lucifer…and according to the legend I’m reading about in the official press release for the SINspirations EP, all of these songs were in some way, shape or form influenced by TV & film.  Would “#1 Deadly Sin” be a perfect choice for something like a scene in a movie or show?  I think so…I absolutely think so!  With regards to that divide that exists between the song’s main parts, it’s easy to imagine someone plucking out the perfect moment to complement their onscreen visuals.  Jennifer puts in a wildly ambitious and confident performance that makes multiple demands on her vocals, but she delivers on all fronts…there’d be no part of the song you could pick for something like a movie scene and not come out with something that sounds spectacular.  She roams between her own distinct vocal sound and the more bizarre mannerisms of a singer like Alanis Morrisette…both work well in her favor, the lyrics are on-point and fit the song & idea she’s going for.

For myself personally, the original song on the SINspirations EP that I’m closest to, is Nine Inch Nails “Hurt” – I grew up on a steady diet of NIN.  Know this before anything else – I think “Hurt” is a truly incredible song…the kind of tune that I think even Trent knew he wrote before its time.  That being said…as amazing as I think it IS…I didn’t even think NIN got it fully ‘right’ when it was recorded…I’ve heard him pull it off live…but as a recorded version, I still felt like it was 99% of what he was truly going for.  Point being, it’s a damn tough standard to live up to when even the song’s creator didn’t quite get there, feel me?  According to what I’ve read on this recording of “Hurt” by Hope, she’s working around a one-take studio performance that took place in Eddie Van Halen’s infamous 5150 studio.  Decent place to hang out in Jenn!  From there, she’s continues to produce the song to where it is now…and she has multiple highlights throughout the “Hurt” that show that strength in the connection she has to it.  There’s no doubt about whether or not she’s into the moment – she certainly is and she’s a very giving artist when it comes to her commitment and dedication in giving her best to each environment she ends up in on SINspirations.  Are there a few moments in a one-take session that she might have wanted to come out a bit differently?  Likely.  But ask any singer that’s done a one-take on anything and see if you get a different answer – that’s always going to be the case.  I think she does an exceptional job on the verses of “Hurt” and I absolutely loved the way the music sounded on her version.  The way she leads into the chorus is damn near perfection…especially that first time around…that’s the magic right there.  The chorus itself…harder to say…I think some people will dig it while others are going to have a harder time with that part.  I dig the way she’s reaching for that raw openness of the song, because that really shows that she ‘gets’ this song and respects its original concept & ideas without question…first & third lines all came out sounding great to me, the second & fourth lines were right on the line between great and grating.  She’s up-front quite a bit in the mix on “Hurt” when it comes to the chorus and bringing it down a bit in the vocal department to sink into the music might have worked here…I suspect it’s more of a case of the one-take on this one and the follow-through on her perspective for what she wanted to do on “Hurt.”  I think Hope finds a way to reaching the full-scope of what she’s looking to do with “Hurt” in both its verse & chorus, and that’s commendable – but as to whether or not that’s going to work for the people out there, that could go either way and I’d understand the argument in both scenarios.

Talking original-versions, the song on SINspirations that I was least connected to, was Bruce Springsteen’s “Dancing In The Dark.”  I’ve got a little love for Pete Yorn’s version…and I can certainly recognize that it’s a brilliantly written song done right by The Boss as well when it comes right down to it…if anything, I think “Dancing In The Dark” has simply suffered over time due to the amount of relentless airtime this incredible song still gets to this very day.  We’ve heard it…a million times.

But honestly?  Not like this we haven’t.  This is a song born anew; you’ll hear the magic of this moment in music like it’s the very first time all over again, in a brilliant new light.  I felt like out of all the cover tunes on this EP, Jennifer knocked this one out of the park.  It’s a massively different gear for her by comparison to the rest – she’s not going for the big notes you’ll find her going for on “Hurt” or “My December” – it’s a much more laid-back, controlled & chill vibe that runs through her duet with featured guest Christopher Webb, who does an equally fantastic job of putting a beautiful new spin on the Springsteen classic.  Right from the drop, when Jennifer started to sing this one, you can hear the notable difference in the way she chooses to sound on “Dancing In The Dark” – that’s a whole different twist on the style & approach you’d have come to expect.  The unassuming energy that exists in this song, the stylistic pace in which they sing this tune…it’s all immaculate.  When Webb brings to slide into the mix, you can’t help but hear the magic that exists in the harmony between them; Webb breaks through smoothly, Jennifer brightly, adding gorgeous amounts of personality to each line as they sing.  For my ears, there’s not even a competition – this is the best version of this song I’ve heard so far and a true testament to the versatility of Jennifer’s potential and capabilities…she can essentially do whatever she wants with her vocals and always come out sounding incredible in one way or another.  Beyond impressed with how drastically she’s switched up her whole sound, vibe and approach on “Dancing In The Dark” and how the two of them have achieved what I fully thought was impossible – I think I’m now completely in love with this song and that’s completely due to the amazing way they’ve re-created it.

Still a fan of the way she went about Linkin Park’s “My December” as well, and I think it was a good idea to include that here on this tasty treat for music fans – you can find my full thoughts on her cover of this cut right here.  But at the end of the day, that’s really what I’d say this is, a treat for the fans out there – with Jennifer included in that assessment – this is her way of connecting herself to music and music to you, through songs many of us already know, recognize & love, sprinkled with her own ideas & imagination.  Lesser-known songs like “My December” allow Jennifer’s ambitions to be more readily accepted…massive hits like “Hurt” are always going to be compared more brutally to their originals.  Even as much as I love the way “Dancing In The Dark” came out personally, some old & moldy grumper out there is mumbling about how ‘you’ll never replace the original’ in the same breath as telling some kid to ‘get off my lawn’ – that’s just how it goes when it comes to cover tunes…impossible to please the masses 100% of the time, but in my opinion, sometimes a single moment can make it all worthwhile.  Jennifer’s has several moments that make this experience on SINspirations worth checking out, notably with her original tune “#1 Deadly Sin” leading the way for a great combination of sounds & ideas all her own, but also for the way she’s adapted each of these cover-songs to her style and discovered how her own strengths can contribute something all-new to the originals.

Find out more about Jennifer Hope from her official website at:  http://www.jenniferhope.com/