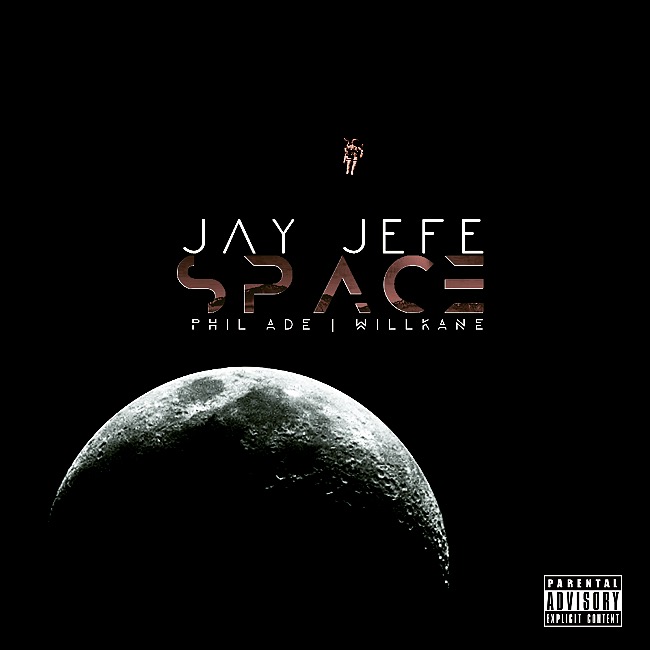 You know what’s like, ALWAYS a good idea to add into your music?  Genuine personality.

It wasn’t all that long ago…maybe just last week actually…that we first checked out the music of Jay Jefe in review.  I liked what I heard…it definitely had the skill and passion on display; both singles “Beast Within” and “Slide” showed the promise and talent of this rapper.  Taking it all one-step further this time around on “Space” featuring fellow-homies Phil Ade and WillKane – double-J has put in a stylistic approach to this track that glides smoothly on a truly hypnotic vibe.

Like I mentioned…personality is a fantastic thing to add into music.  “Space” has so much personality, character and craft that it’s bursting at the seams.  The pacing and movement of this track really utilizes the “Space” and really creates an atmosphere that’s completely chilled out and massively entertaining all at the same time.  Each emcee on the mic sticks-it perfectly on their bars and match the energy & style envisioned for this sound & idea with serious professionalism.  The editing & production on the music is 100% solid and vibrantly dynamic…again, it all moves at a slow & steady pace but the extraordinary amount of things happening in both the music and on the microphone really make this song entertaining in highly imaginative and creative ways.

The depth of sound is spot-on…and even though the track switches, flips & transitions as it evolves and plays these emcees never get tripped up.  Excellent use of just a hint of melody to a lot of the lines…listen to the way the lyrics start out on “Space” and you’ll hear what I mean…it’s right there on the edge of rapping/singing.  The resulting sound has a real fresh energy to it…it sounds natural, free & unforced…the words come out flawlessly bending into the mix of the music as it smoothly glides along.

As it heads into the second verse, you get a bit more into the personal and the narrative of the entire concept as a whole continues to expand.  Lyrically, each part they’ve written contributes to the story overall…it’s key to a successful collaboration to really have each piece of the puzzle adding up to the full-picture.  With the vibrant energy in the final verse, “Space” ends on a more up-tempo vibe verbally than it begins…but the effect that this has with the music works extremely well, especially when they bust back into the music from the final breakdown quickly before the end.  Each emcee brought their own unique style to the mic – but at the same time, each player involved really built on this idea…and you gotta admire a collaboration that works as successfully as these three do together.

Overall I really think it’s the pacing that leads them to victory here.  The whole track plays like a fluid moment in time…the hooks are there, but they’re super-subtle and delivered in the rhymes themselves.  It might not be the most traditional or straight-forward vibe you’ve ever heard – but that’s a good thing isn’t it?  It’s creative and it’s got wicked movement, style & flow; as a result, the pace and pivoting, shifting and wrapping words around the beat really ends up working as a full-on experience that really captivates and delivers.  Solid stuff!