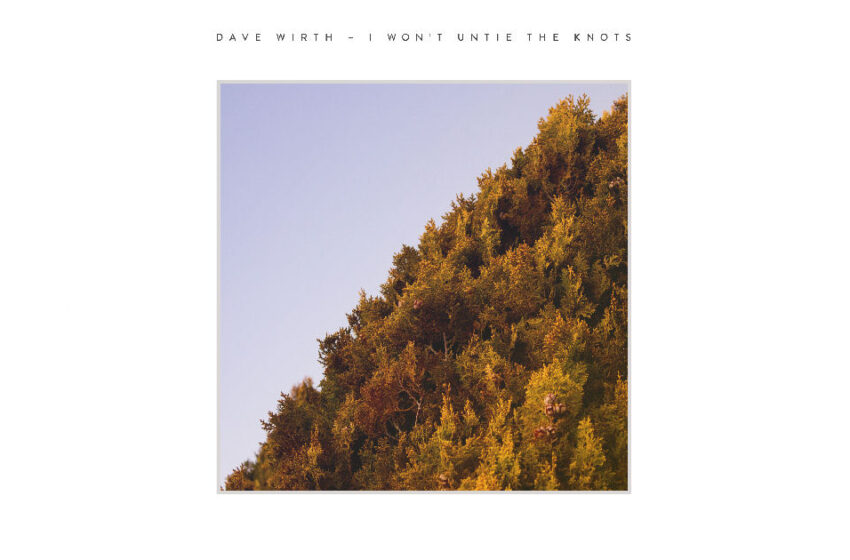 I can only imagine the creative place this guy must be in right now.

Time and perspective can be such massive assets in making music and so rarely understood for the value they contribute to an artist’s or band’s career.  Think of all the best of the best that you personally listen to…chances are, they’re not just coming back tomorrow with another SUPER COOL BRAND-NEW HIT SONG…in fact, chances are, the names you cherish most actually end up spending more time away from you and your speakers than you’d personally like them to.  Writing, music, and art…they NEED time…they need experience…they need perspective – and though it’s hard not to panic completely when a name you wanna see all the time hasn’t popped up for a while, the reality is and has proven to be throughout the course of music’s history…that this can actually be a really, really good thing.

After I’d first reviewed & revered Dave’s old band Sprightly Moans and also interviewed them way back in the day here on our pages, things went radio silent for a short time afterwards.  The next time we ran into each other online was years down the road…and not only did the man come back to the scene, but he brought an entirely different set of vibes with him as he rocked solo on his album Flutters, and the Big Heavy EP.  Two separate bursts of documented creative-times that yielded completely unique results from both experiences – and after more years went by after that yet again, four to be exact in each circumstance of his absence, Dave resurfaced earlier this year with a band called The Shikes and freakin’ blew my mind out in the process with such a spectacularly creative return.  They say good things come in threes…and this third experience with Dave Wirth in our world sounds like it’s going to be the time that makes him really stick around.  Everything the man’s doing right now sound sensationally inspired, and as a performer, he continues to get more expressive, more bold, more confident, and more imaginative every single time we get to hear his music again.  In 2021, as far as my ears are concerned, it’s been pretty much like the guy cannot lose right now – and in my heart of hearts, I can only hope that all of y’all out there listening are feeling the same way I do when it comes to Dave’s tunes.  The Shikes Aggression EP was a monumentally refreshing spin on hybrid sound & style and a riotously enjoyable start to this year – and I am absolutely stoked to have the wizard behind that very curtain back to entertain us all again so soon – Wirth is making magic on “I Won’t Untie The Knots.”

No lie though bro, that’s one hell of a gratuitous intro!  For ten seconds there, I wasn’t sure I was even going to get a song at all, but in listening closely, you’ll find curious sound beginning to build and a full tune’s worth of stellar ideas kicking into gear soon enough.  Context matters in this particular scenario – from what I’ve read, “I Won’t Untie The Knots” is somewhat of an audible homage to the Arcade Fire’s genius record Funeral and what I’d probably consider to be the even more brilliant melodies of Band Of Horses.  Setting out to make a song in a certain style…especially one that would lead any artist or band into highly creative terrain…there’s risk there for sure – too close & you’re a copy, not enough changes or identity & you’re a hack, and of course, too much of anything and you won’t sound anything like what you originally set out to achieve.  Dave should be extremely proud of what he’s pulled off with his latest single “I Won’t Untie The Knots” in this regard; it’s not too much Arcade, it’s not too much Horses either – it’s a balance that would have Wirth’s solo music sitting perfectly in between those poles of reference, and likely chillin’ with The Editors and their most recent records.  Maybe even more than that…to be fair to The Editors, they really started flipping the switch and showing signs of pure brilliance early on in their catalog…now they just put out full records containing it from start to finish as opposed to a couple gems in a set-list is all.  Anyhow.  Dave sounds & sings a lot like Tom Smith and I suppose that’s what likely brings most of that comparison to mind…and in my opinion, they’re both vastly underrated singers that need a ton more attention than they receive.  It’s a very nuanced style of singing, where the changes that occur are often subtle, but vibrant & bold at their most intense…hazy at times, but so clearly aware of their surroundings as well, with voices that react & respond with character & charisma to the inspiration of the music playing alongside them.  Instrumentation-wise, “I Won’t Untie The Knots” is so much more ambitious than most would ever realize in listening – there’s an astounding somewhere near TWENTY guitar tracks laid into this tune, freestyle drums to give it a powerfully organic energy without the use of the ol’ studio click, and additional contributions that you’ll hear as well.  These parts are crucial to the success of this entire song; no lie, between the guitars, drums, vocals, and lyrics…that’s where you’ll spend your time really listening.  For me personally, I was massively impressed at the way Dave’s got everything listed into this tune – and part of that is thanks to the assistance of another Dave in the mix, Dave Sykut, who handled the mastering and put that final coat of sparkle & shine into the magic of this wildly enticing new single from Wirth.  I mean, I haven’t even mentioned the fact that Band Of Horses would be right up there in my top-twenty or even ten over these past five years or so, or the fact that being Canadian means we’re never allowed to stop loving the Arcade Fire here up north – and it’s pretty obviously I really dig The Editors as well – so guess what folks!  If Dave Wirth’s new single can rock with such great company in comparison and not actually be mistaken for any of those names in the process – we’re talking all aces and another HUGE WIN for this guy.  Like I was tellin’ ya from the get-go of this review – I can only imagine what it’d be like to be Wirth right now…when you’re dialed-in to your most creative & inspired moments in this life, you can feel it flow through you from the moment you open your eyes in the morning to the very moment you meet the sandman at the end of the night.  That is, if you’re lucky enough to be able to sleep amidst the surge of creativity, of course.  I have never been anything less than impressed with Dave’s music in every form it has come in – but there’s also no question whatsoever in my mind that he is making his very best, right here, right now in 2021.  From what I heard in The Shikes, to this absolutely stellar, artistically-designed, GEM he’s got here in “I Won’t Untie The Knots” – to me, there’s no contest…of the music he’s made, this is the gear suiting him 100%.

LOVE the layers of guitars…LOVE the stomp & surge of the drums…LOVE the way Dave sings this song and the words he’s penned to it.  He might be a lil’ on the bleak side for what you might expect with the energy this song pumps out…but like so much of what he’s done in the past & one of the main reasons I continue to dig this guy’s writing & music to this day is the fact that he’s able to add just a crack or two of light in the darkness to make sure nothing feels quite like utter despair.  Likely, the effect ends up being quite the opposite really – you’ll find yourself singing along long before you realize the weight of his words on a song like “I Won’t Untie The Knots” – and when you do absorb them, you’ll love the effect of how Dave writes thought-provoking & evocative words that make the wheels in your brain turn through the use of clever & clear imagery, and scenes that genuinely have us considering his sentiment.

Dude’s firing on all-cylinders right now.  “I Won’t Untie The Knots” is another outstanding audible slice of awesomeness from the mind of Dave Wirth in 2021, and another A+ highlight in his growing catalog.

Find out more about Dave Wirth at his official homepage at:  https://www.davewirthmusic.com