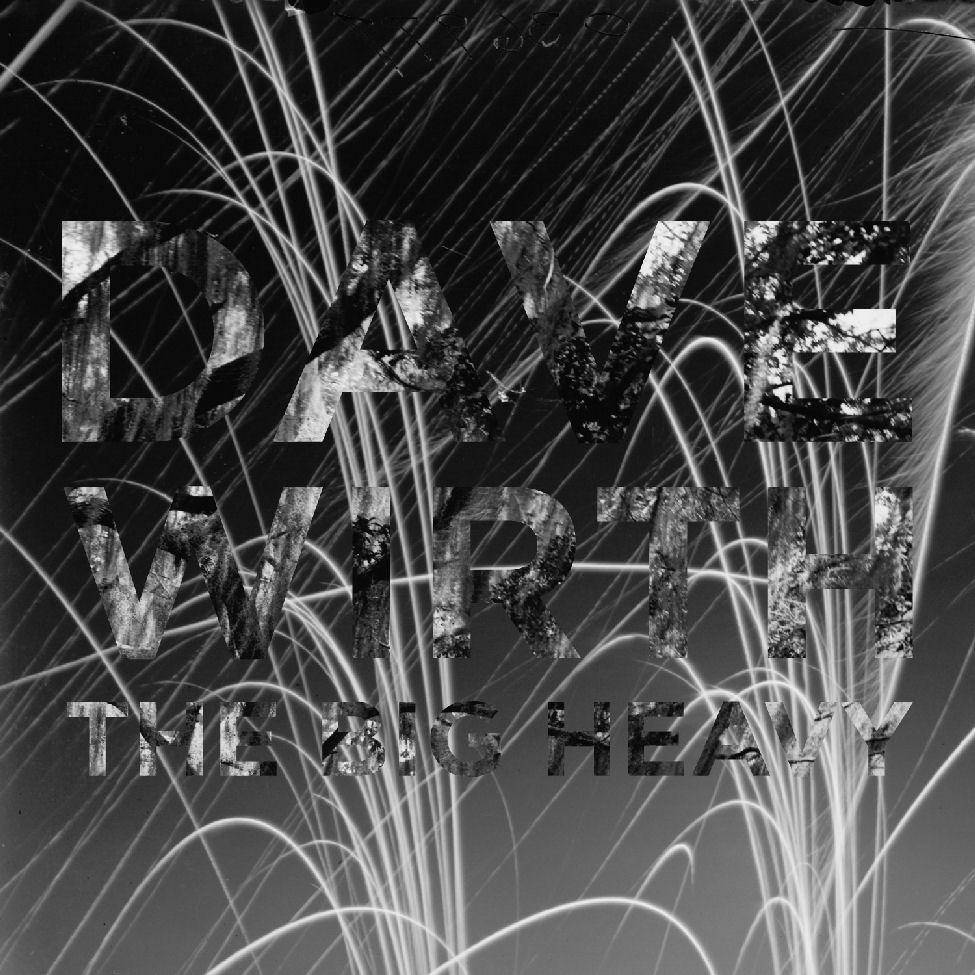 It’s a sad yet perfect day to discuss the music of Dave Wirth…so that’s what I’m going with today.  If you’re Canadian…if you’re a fan of The Tragically Hip or if you’ve been lucky enough to hear any of the poetic words from the mind/mouth of Gord Downie…today has been a tough, tough day.  A true ambassador & champion of creativity and expression is no longer with us…and it’s just fuckin’ sad man; it’s been hard enough to navigate through the shock today, let alone write anything at all.  I did the standard tour through The Hip’s catalog and exhausted my tears as best I could…and then I suppose I did what I naturally always do in times of emotional-need – I searched for music that would help me through it all.  This entire day has been ‘The Big Heavy’…but as it turned out, The Big Heavy was also what began to pull me out of the despair of the day’s events and shine a light on a path to a way out.

So thank-you Dave…I’ve been saving this record for a day when I needed it most…and today is that day.

It’s more than just a suitable narrative by the way.  Downie was misunderstood by many for the somewhat bizarre approach he found in the melodies he wrote…Dave has some of that same artistic courage in his writing that creates a tangible strangeness in the beauty of the music.  Also much like Downie, Wirth can be intensely poetic…and after the release of the instrumental record Flutters earlier this year – it’s awesome to hear him back at the microphone with his unique approach combining highly vibrant imagery in his lyrics with genuinely soulful expressions that give the words weight through the way he sings them.  Is everyone going to ‘get it?’  Maybe…maybe not.  I’ve been down this road with Dave’s music before…my ears are absolutely convinced that he makes truly stunning, gorgeous music from the heart that completely connects…but I’ve also encountered contrasting opinions due to the amount of artistic expression he’s put into his music before.  Some people dig their music to be different – some don’t…doesn’t make anything bad or good, it just is what it is and we all hear things the way we hear them.  Even a band like The Tragically Hip can be relegated to just one continent more or less due to those kind of signature sounds and uniqueness…to me, it’ll always be much more important to pursue your art as you see it, no matter where you end up or how far it takes you…be true to yourself.

After listening to Dave’s music for several years now, I feel like he’s always stayed true to himself.  Years back, in his old band Sprightly Moans, he wrote one of my favorite tracks from the indie-scene still to this very day, a song called “Love Is Nothing Without Eternity” that showed a much different side of his music…a side that sounds much closer to this new EP, The Big Heavy.  Certainly makes me happy…there’s a real comforting sound in Dave’s vocals that’s organic and real as it gets; he takes chances in how he expresses himself that way, but with a more refined approach now in his current work – it’s all paying off in the results.  I’ll advocate on behalf of “Love Is Nothing Without Eternity” until I’m dead and gone…but I also can’t deny that Dave has certainly upped his game when it comes to his confidence, production and performance on these new tunes from The Big Heavy.  What makes it exceptionally interesting to listen to is the fact that he’s put out a two-song EP with vocals after so long without…alluding to the fact behind the scenes that something about these songs needed to come out, perhaps if only to break the walls down to allow the rest to continue afterwards, I’m not entirely sure…but I’ve certainly been there.  Sometimes it’s best to cut the cord before you potentially take an idea too far, or again, just to be able to separate one project from the next, say what you need to say, and move forward from there.  Whatever his reasoning was…he nailed it; these two songs truly shine together and are a brilliant return to the microphone for an artist that truly belongs in front of it.

I’m not entirely sure which order these came out in…so I’m writing this in the order that I’ve heard’em, which I’d imagine is likely how it ended up.  I started with “Eyelids And Oil” and was instantly hooked; knowing where he’s come from in his past music, I knew immediately he was heading into a style and sound that truly works in his favor.  Again – Dave’s upped his game significantly from anything you’ve heard in the past through the amount of layering and work he’s put into this material…so while it might have a few sonic comparisons to what you know from his past music that make it comforting, inviting and welcoming to listen to – it’s also evolved into something that’s potentially going to last much longer.  If I had to take a guess as to the inspiration might have been on a musical-level here for “Eyelids And Oil,” I feel like it wouldn’t be a guess at all – there’s an incredible amount of Thom Yorke-like tendencies here…not the Radiohead stuff, the solo stuff…listen and you’ll hear it.  Particularly in the brilliant use of percussion that continually creeps into the mix of “Eyelids And Oil” – it sounds like rain on a hot tin-roof, changing, deepening and strengthening the sound as the rain continues to beat down as the roof begins to cool and changes the tone of each drop.  I obviously can’t vouch for that completely being the intention – but the overall result is bloody brilliant no matter what it reminds you of, it sounds amazing.  Listen to the layering at the very beginning!  It’s so damn subtle it hurts!  Right as the song begins, there are completely awesome things happening in the music that are threaded wonderfully underneath the vocals, and then “Eyelids And Oil” breaks to a simplified sweetness and brilliantly focused performance in the verse.  Punctuated by Dave’s vocals providing the main hooks without words and just allowing the music and melody to guide his singing, he sounds amazing in these moments…the lead is spectacular and the backing layers give it all such amazing personality, character, charisma and charm that by the end when everything is all combined together, Dave’s found himself right in the swirl of a real time-stopping, breath-taking moment in the emotionally intense atmosphere of “Eyelids And Oil.”  The way he makes this song develop, evolve, envelop and surround you is honestly one of the most beautiful moments I’ve experienced in music this year…everything is so immaculately subtle adding up to something so powerful…the progression of “Eyelids And Oil” and Dave’s choices here, the ideas, the execution…I think it led him directly to make the most stunning track I’ve heard from him in years.  Love the music, love the way he sings it – I love everything about it quite honestly…this is Dave at his best in his vocals and certainly in the lyricism…it’s minimalist music with maximum impact and real sincerity.

“Open Mouth, Monstrous Teeth” takes a more traditional approach than perhaps “Eyelids And Oil” does…and I’ll admit it took me longer to get into this one by comparison as well…but by the end of several listens, I was pretty much just as hooked on this tune.  Pretty much!  I’m not going to take anything away from or tarnish the stunning awesomeness of “Eyelids And Oil” by pretending these two are completely neck-and-neck for me…close…but not quite.  “Open Mouth, Monstrous Teeth” has a much more lethargic energy to it…not lazy by any stretch, that’s not what I mean; more like a comfortable droning, like being locked into an emotion, thought or moment in time.  Where “Eyelids And Oil” succeeds most wildly is in how it evolves and takes us on that adventure in sound as it develops, “Open Mouth, Monstrous Teeth” takes the opposite approach by revealing nearly all of its cards at once in that sense.  Completely different approaches in the writing, both songs yield stunning results…just depends on what you’re looking for & what ya wanna listen to as to which method might connect to you more quickly than the other.  I’m still thinking I’m hearing the Yorke influence here on this track…I know that Dave and Thom have different tones, but listen to that mix of sweet haziness in his tone coupled with insightful, descriptive lyricism and try to tell me that there are comparisons to be made!  Beautiful use of the pedal-steel guitar drifting in and out of this mix…the music is almost all complementary here to what Dave’s doing vocally, which is the essential driving force in this entire melody.  “Open Mouth, Monstrous Teeth” is the kind of song you have to hear instrumentally as well to truly appreciate just how much the vocals are bringing to this tune…which is fairly true of “Eyelids And Oil” as well…he does really well inside of a minimalist approach and finds the perfect level for his vocals to stand out just as they should when taking charge of the main melody-lines as they are.  His vocals have truly become an instrument in these new songs on The Big Heavy…and he’s really never sounded better on the microphone.  There’s a beautifully warm glow in the music and sound of “Open Mouth, Monstrous Teeth,” even while he details the melancholy and metaphorical imagery in his words…it’s all oddly comforting, creating a wonderful contrast between the sound of the music and the lyrics that brings about another highly memorable moment in time from Dave’s highly capable musical-mind.  He’s got the uniqueness in his approach and instincts that lead to authentically beautiful results…through songwriting that will truly last and music that always captures the heart & mind with equal strength.

I’ve got more to say about this…so you can expect that I will on the upcoming episode of the SBS Podcast, episode 035 coming out this week…check that out and I’ll tell ya some more details about The Big Heavy from Dave Wirth and play you one of these cuts on the show.

Until then, be sure to learn more about Dave Wirth through his official website: