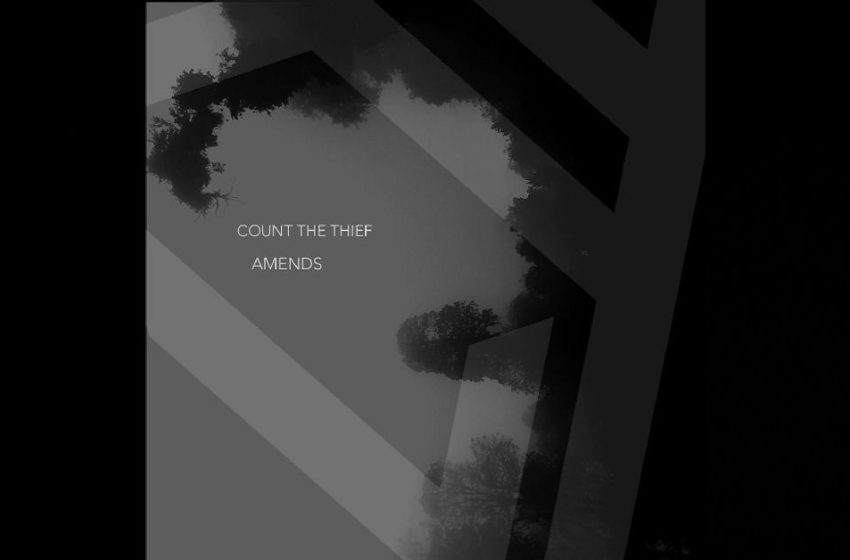 Heavy hitter alert ladies & gentlemen…if for some reason you’re not familiar with the name Count The Thief by now, then you have clearly not been following along with our bouncing ball.  These guys rock!

Lest we forget, these guys slayed the competition on their way to claiming the esteemed honors of our Best New Sound in 2015 – and for their efforts, we continue to salute & celebrate the music of Count The Thief with a permanent spot on our Wall Of Fame after being selected by YOU as our winner that year.  Not to mention all the times I’ve blasted their music loud’n’proud on the SBS Podcast, up to & including the most recent episode, where we played the stellar title-track from their new EP, Amends.

Which is where this journey begins folks – “Amends” is the first cut you’ll hear from the record, which came out just prior to the end of last year.  Talk about doing a title-track the justice it deserves!  After nominating them to our top-10 list in 2015 and seeing them dominate the competition for the music they made on their album New Role, believe me, I know this band is capable of savagely killer material – but I’d be lying to ya by omission if I didn’t mention that this first song exceeded all my wildest hopes for what the new Count The Thief record would start out like.  “Amends” isn’t just a good song, it’s not just a good start to a record – what it IS, is one of the best songs in their catalog without question – and I honestly think anyone listening that’s familiar with the band would absolutely come to the same conclusion…that’s how obvious and apparent the awesomeness of this track really is y’all.  Not really much else to be said other than right from the drop, I knew this was gonna be one of my favorite cuts of the YEAR, never-mind from the Count The Thief catalog.  Listening to the bass, guitars, and drums interact on this track is nothing short of magnificent.  At its core, you could probably make a comparison to the Chili Peppers if you were to judge “Amends” on the amount of sparkle & flash the guitars bring to the melody in their tone and the rubbery bounce of the hooks & energy coming from the rhythm section.  Though I have my moments with RHCP overall…on a musicianship level, they’ve always been off-the-charts incredible…they stumble into the occasional great song, and likewise, singer Anthony Kiedis gets lucky enough every so often to fit the sound spot-on.  I’d argue that a song like “Amends” takes a lot about what’s going right in the RCHP recipe and pushes it even further to give it all a much grittier sound with way more meat on the bone.  It’s harder…edgier when it comes to the music, and largely also due to the wicked vocal performance that’s been put into “Amends” by a way better singer to accompany the killer music on this cut; this title-track is a bold reminder of how powerful, melodic, and addictive Count The Thief can be at their most focused & at full strength.

On this particular EP, you’ll find three studio tracks & one live cut at the very end.  Let me be clear – “Veil” is a rock-solid tune…but it is sandwiched in what’s nearly an impossible spot to have it stand out likely as much as it probably should.  And that’s despite all of the band’s sincere efforts to ignite the intensity and rock the fuck out here…which again, to be clear, they’re certainly doing.  My gut tells me it doesn’t quite have the sparkle of innovation and genuine interest that “Amends” creates on one side, and on the other, you’ll find the advance single from this record, “Zero Four” – so to ask “Veil” to make the impact it could without at least a couple spins to let it really sink in ends up being actually a bit more of a tall order.  That being said, you can hear savage live potential in “Veil” – like, show-stopper type-radness that could be fully maximized in extending this song out as far as it’ll go & bringing down the house by saving this song for the finale.  You really gotta keep in mind that they’ve set the bar extremely high in the past already – it’s only by comparison to their own strengths & material that you can hear “Veil” might not quite have the hooks & pull of a song like “Amends.”  Still plenty to latch onto, still plenty to dig on – don’t get it twisted & don’t get me wrong here – “Veil” will still find more than enough time on my playlists & any new Count The Thief is assuredly always welcome here in these ears of mine.  I mean, you gotta admit, listening to the drums & bass kick this song off is 100% stellar.  From there, I think the musicianship remains the most impressive aspect of this cut as they wind through the melody of the verse…which may or may not do it for ya, I dunno…that’s hard to say.  I think it’s still got enough appeal, but I think there is also zero doubt that everything surrounding the verses of this song steal the entire show.  The detonation of bombastic mayhem in the chorus really hits the mark and the execution is bang-on…and as far as the intensity of the instrumental moments are concerned, they’re not ONLY sonically spectacular yo…they’re a sign of savagery yet to come…brace yourselves for this next tune…

In attack mode, you can just tell from the very first split-second of “Zero Four” that Count The Thief is about to do what Count The Thief does so fuckin’ well and light this motherfucker UP with intensity.  Listen to the grip the bass-lines put on ya will you?  Listen to the savage tone & energy in the vocals.  Listen to the way the guitars come ripping in to scorch what’s left of the earth around you!  I ain’t gonna lie…in some ways, I wouldn’t consider “Zero Four” a typical single at all…because I know it’s a lot for the everyday listener to absorb all in one fierce sonic punch…but in other ways, you gotta recognize just how continuously engaging the structure & execution of “Zero Four” really is…and there’s incredible value in that.  Like, it’s almost as if you don’t even get the OPTION to take your ears off of this song, know what I mean?  After a short burst of feedback & frequency, Count The Thief just fuckin’ rockets off and keeps the sound coming at you fast & furiously…and hell y’all, my ears sure appreciate it, how about yours?  “Zero Four” is the kind of song capable of amping you up so hard you’ll start throwing your own furniture or begin lighting a fire in the corner of your house, lost in the mayhem & menace being pumped out through your speakers by Count The Thief.  I fuckin’ LOVE everything about this song…it’s got so much in common with seriously amped-up angsty tunes like you’d find in everything from Quicksand to Rollins Band, Bodycount, Faith No More, or even At The Drive-In…all while still being so damn Count The Thief that you couldn’t mistake them for anyone else.  Basically, you surrender your attention to this song immediately or within mere split-seconds it’ll take it by force – I don’t think you could have asked a single thing more from any member of the band when it comes to what they put into “Zero Four” – you can practically feel the blood & sweat flying out of your speakers on this track like you’re right there in the front of the crowd gettin’ fluids rained on ya.  And I mean c’mon, ain’t that what we all want in the music we’re listening to?

“Music Is My Listener” is probably a more curious choice to have included in this particular EP.  Don’t get me wrong, it’s another quality tune…but definitely a noticeably different vibe as we shift from the studio produced sound of Count The Thief into the live version.  Which to be fair, is the same somewhat jarring experience you feel any time a band or artist chooses to go this route…but it can also feel like a true bonus in every sense of the word.  Like back in my day, having an extra live track on a CD or a tape was just about the coolest thing in the world, ever – and that’s even IF the quality didn’t quite match up or compare to what came beforehand.  Arguably, with today’s tech and capabilities, something like “Music Is My Listener” comes out much closer of a match in terms of quality in the sound than what you’d find on a lot of those old CD singles I’m referring to…but it does beg the question of why.  There is no previously recorded studio version that we know of when it comes to “Music Is My Listener” – and after such a significant amount of time in between their last album and now…and factoring in the potential imbalance between studio recordings and live ones…I mean…why not just take that extra two weeks and get a produced cut of this final tune on Amends?  If we’re looking at it as a bonus cut, then I’m like hey right on, good inclusion…but otherwise, I’m honestly a little perplexed by the move.  I’m always going to take more Count The Thief where I can get it, but if I’m asking myself would the overall impact of finishing a tight three-song set have been greater, especially ending it on the savage strengths of “Zero Four?”  I think the answer to that is, yes, without question, personally.  I’m never against the inclusion of a live track on a studio recording from a collector’s standpoint…but I have also always understood the effect it has had on the repeat value of basically any record you could think of that has’em.  What I do really like about “Music Is My Listener” is you can hear Count The Thief continuing to explore & expand the direction of their sound & style a bit more here…they’ve always got fantastic depth to their lyricism & songwriting, but you can really feel that aspect of their music come through shining big-time on this last cut.  You never know…it might be a hint of what’s to come, or at the very least serve as a solid advertisement for why you’d wanna get out there and see Count The Thief LIVE whenever this whole global lockdown finally ends – either way, or whatever purpose “Music Is My Listener” might serve, despite the potential imbalance it could create or how that might affect the overall repeat value of all four songs as one as opposed to breaking this up onto your different playlists – more Count The Thief is more Count The Thief and you bet your ass you can always count on that to be incredibly kickass music to listen to.  Amends speaks seriously strongly on behalf of this band having their best years still ahead.

Find out more about Count The Thief at their official page at Facebook here:  https://www.facebook.com/countthethief