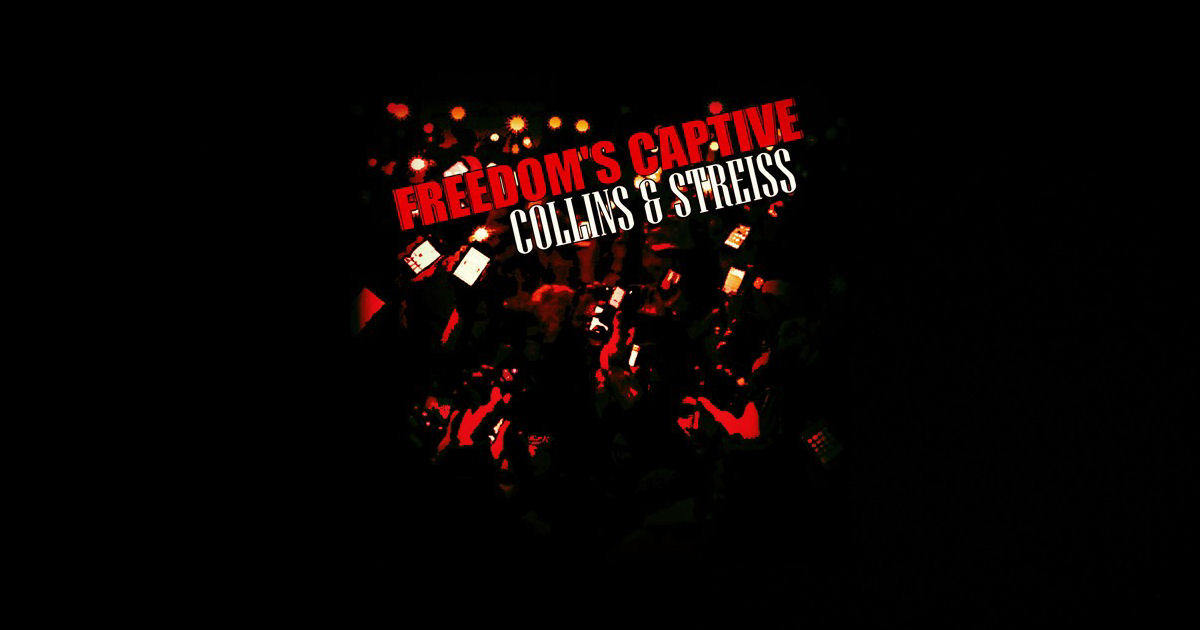 I’d have to be crazy not to support this tune…it’s built of a ton of sounds I’ve grown-up on and loved throughout the years.  To me, the overall influence on this song…or the comparison that most would draw to, is without question R.E.M. – and given that’s always been my favorite band of all-time, it definitely makes it hard to deny a tune like “Freedom’s Captive.”  Nor would I really want to deny it anyhow – Collins And Streiss have put out great tunes in the past that we’ve reviewed here at the page; our fellow Canadians have more than proven themselves to be a reliable source of audio entertainment.

All that being said…I think for myself personally, there’s little to no question this is the best I’ve heard from the duo so far.  You could definitely make a case for the searing impact that the opening guitars create is also influenced by the R.E.M. catalog…but perhaps that’s where it differs a bit for me…that part and the chorus of this tune remind me much more of Cracker at their most intensely melodic & inviting.  Undoubtedly there’s a smoother vocal sound in Collins And Streiss than you’d find in most Cracker songs out there…but when you hear that slightly southern twinge from the soul of the guitar strings or the energy you’ll find in the chorus, to me, Cracker becomes an apt comparison that suits this scenario.  In any event, this is the kind of solid company you wanna be keepin’ as an independent band for sure – “Freedom’s Captive” has a wonderful combination of wild & clever hooks and a nostalgic sound goin’ on.

They SOUND energized and invested throughout this whole tune.  I think they’ve done an absolutely magical job on the verses of “Freedom’s Captive,” in fact I’d go as far as to argue that the hooks and allure found in those moments rival the strengths of the chorus ultimately.  For the record though, we are talking about two completely separate gears however – but notice how effective both become; the verse is inviting in style & sound, the thought-provoking lyrics are entirely well sung, and chorus adds that extra punch & energy, brings up the harmonies and increases the accessible catchiness.  Their lyrics remain enticing at all times throughout this latest single from Collins And Streiss, and combined with the way they create the bigness of the chorus, “Freedom’s Captive” becomes an anthem of its own right – a song built on massive strengths that will genuinely rally the people to sing along with them, full volume.

Loud & proud is what I’m sayin’ folks.  That’s the way you’ll want to enjoy this Collins And Streiss single – and that’s the feeling you get when you’re listening to it – it literally makes you wanna shout out that chorus, loud & proud.  The way they’ve built that moment up so perfectly, it’s either sing along with the song, or stand up and cheer – that’s the effect the energy has to it and the unified sound the project.  They sound confident, they’ve put in a notably flawless performance, and all aspects of this cut seem truly locked down from beginning to end, making sure that they’ve taken care with professionalism, precision, and authentic passion dripping from every guitar-lick and every word they sing.  “Freedom’s Captive” might arguably reach back towards the mid-90’s alt/pop sound – but for real, take a moment to appreciate just how WELCOME it is through what Collins And Streiss have created, & how truly timeless it is.

As I mentioned from the get-go, it’d be hard to find any complaints from me about a song that sounds like this.  “Freedom’s Captive” is loaded with great lyrical imagery, colorful instrumentation, and vocals that have Mark Collins and Anton Streiss sounding at their inspired best.  I think you can always hear when a band or artist really believes in the material they’re making – and to me, that’s a huge factor in what I can hear on their latest tune – the clever writing and sparkling execution combined have got them shining on a seriously single-worthy song.  “Freedom’s Captive” has the kind of bold hooks and melodic chill that are guaranteed to have people paying attention, and it’s the smart way that they switch between the main moments of their songwriting that can’t be missed.  You can hear their craft, you can hear the genuine respect & love for a strong part of music’s history, and you couldn’t possibly miss the enthusiasm, energy, and passion that they’ve put into every moment on “Freedom’s Captive.”

I’ve liked or loved what I’ve heard from these two talents combined so far – Collins And Streiss offer a very sincere sound in their material that really hits the mark.  A song like “Freedom’s Captive” has me appreciating just how different each of the tunes I’ve heard have been – and how much they clearly have a grip on a multi-faceted sound that not only suits them, but also entirely entertains us, every time.

I’ll be spinning “Freedom’s Captive” on an upcoming episode of the SBS Podcast and sharing more thoughts about this single in October for sure!  Until that magical moment arrives, find out more about Collins And Streiss from their official page at Facebook here:  https://www.facebook.com/Collins-and-Streiss-762369407204284