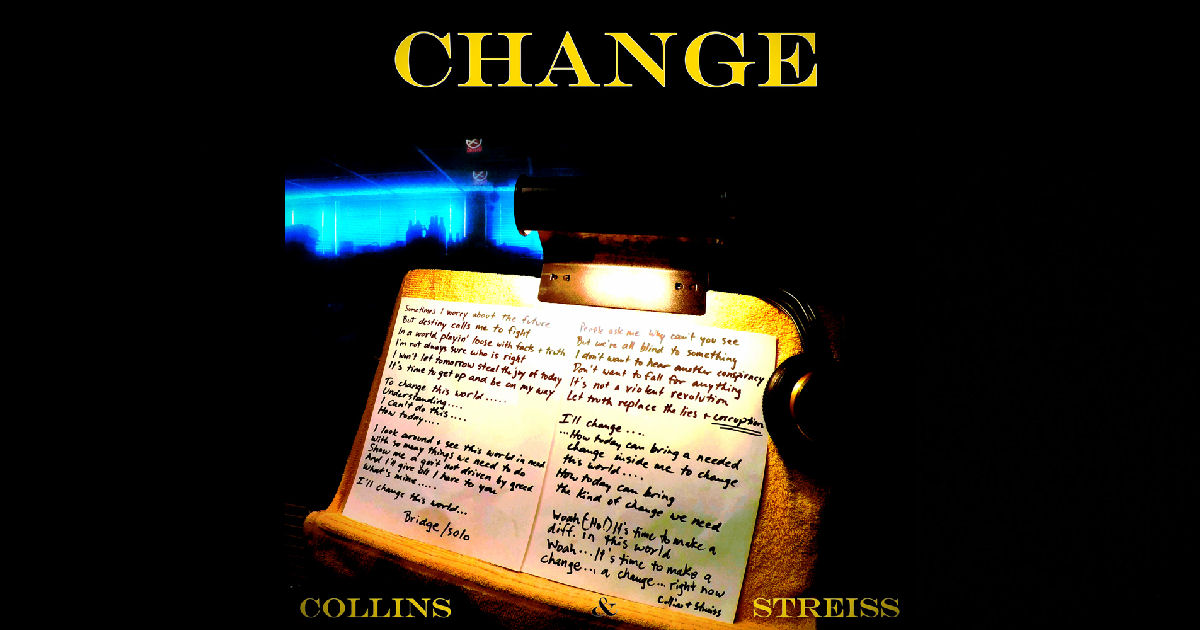 Y’all know me…I’m a big fan of you fine people using your platform in every way you can to say something.  Ultimately I prefer it when what that ‘something’ is, isn’t always about chicks’n’cars – I think there’s a much more altruistic approach that can be taken by music-makers out there to broadcast a message or two out there into the universe that, you know, might actually create some change or contribute somehow to the awakening of the social consciousness.  I don’t think every song out there needs to be political – but I do think that it’s important to use the voice you have, however you can.

Collins And Streiss get it.  If you’ve been following along with our pages here at SBS over the course of this year, you’ll remember the duo showing up in a review of a handful of their singles back in January – and theme-wise, there was a bunch to absorb & a range of sounds to listen to.  Again – that’s because Collins And Streiss…they get it.  They understand that each song they’ll write calls for its own energy, its own concept, its own approach…that each song has something inside of it already, just waiting to be discovered…that the music will guide them to what they truly want to say to us…and that there’s a time where certain things need to be said.  There’s never been a time that I can recall within my own lifetime that the world could have benefitted more from the words they’ve written into their new single “Change” than it can right now…the whole planet could use a lot more of these guys on the frontlines.

It’s largely due to the lyrical content that they’ve got me listening this time around; don’t get me wrong, I’ve got no objections to the music either – it’s just that Collins And Streiss have made a noticeable effort to say some important stuff on this particular single…and I’m hearing what they’re saying – are you?  Set in the bright & cheery sound of gentle-but-energetic, acoustic-based Rock/Pop – almost in that Deep Blue Something kind of style – they’ve taken the time to round the corners on the music & everything comes out shining & spectacular to listen to…but if you’re REALLY listening…I’d hope you’d notice these words as well.  “Change” is about exactly what its title implies; it stresses the urgency, importance, and reasoning behind WHY it’s relevant.  And though it’s written in a first-person perspective – put yourself into the main character of this situation & see if you don’t feel like it applies to you as well somehow.  Chances are, it will.  Chances are – it SHOULD.

Not to get too political on all of ya…but I think it’s important to note that Collins And Streiss are a Canadian-based duo.  For those of you reading who are outside of Canada – it might actually seem a little strange that C&S are calling for “Change” in a country that’s infamous for getting along right?  First of all – their new song isn’t restricted to one part of the map’s geography and the ideology driving their lyrics is universal.  So while they’re not necessarily picking on Canada specifically – I DO think that it’s important to note that they’re echoing a feeling that’s felt across the world in many places, especially right now; essentially, no matter where you are right now, “Change” is needed more than ever.  Point being, that even in good ol’ sunshine & snow Canada, the shadow of discontent continues to get larger.  You can cite #45 south of the border as part of that reason if you’d like to…I’m certainly fine with that – but I would argue that we’ve simply reached the boiling point of what’s been stewing for a while now.  We’ve reached that point where the people are waking up to the fact that they’ve had the real power all along…we’re unorganized, we’re unsure, we’re taking our first steps forward – but we’re there.

Chances are, you can see it all around you…hopefully on the positive-side of the scenario…but we are changing right now.  It starts with our own personal awareness…and if we’re lucky, it’ll spread to others.  We all need to “Change” – we all need to adapt…and assuming that we can do that, we’ll find a way to keep jamming upon this floating rock for years & years to come…but it starts with each of us, individually.  And I think that’s what really works about the new Collins And Streiss single – it’s written from that singular perspective, with the understanding that it leads to a larger shift, a cultural movement, a genuine “Change” overall.  It makes it easy to slide right into this scenario and understand how it applies to your own life…and hopefully, a song like this will inspire you to go out there and create some “Change” of your own, wherever you are.  Things are friendly in Canada…don’t get me wrong, I’ve lived here proudly my entire life…I might consider myself to be one of them ‘global citizens’ & all…but I do love it here, always have & always will.  That being said, we’re far from perfect.  I felt like it was important to note the fact that this is a song coming out from a Canadian perspective…that as polite as we might seem on the surface – there are people that understand what’s underneath ain’t as shiny.  The point is that…well…I suppose that we’re all getting squeezed by the oppression of expression and limitations on our freedoms in all corners of the globe…even in Canada, we feel it in our own way as a country – and we can certainly see what’s happening throughout the world if we’re paying attention.

Collins And Streiss are.  That’s exactly how songs like “Change” get created…why they’re important.  A song like this becomes part of our history…part of the thread of the timeline where you can see in the music being put out there & the way that artists/bands are speaking up right now…that we’re in that spot right before the wave breaks and true change comes to wash over all of us.  A song like “Change” is just as much of a proclamation of their own intentions as it is a call to arms to the rest of us to get out there and make whatever difference we can…to protect what’s important and find a way to evolve, as individuals, and as a society, together.  Songs like “Change” are like verifiable entries into the diary or daily journal of the world…and I like to think that as artists, musicians, or whatever else – using your platform to help document or chart our course forward, is immensely satisfying to the soul.  C&S are doing their part…MORE than their part in fact, because not only are they using their platform to say what’s important to them personally, they’ve put their ideas of “Change” out into the world to serve the greater good.  In my opinion…music doesn’t really get more admirable than it can when it’s applied in this respect; full salute to Collins And Streiss for creating a song with such ambitious & sweet sentiment.

I know I’ve chosen the heavy route to write about such a sunny-side-up song…but what can I say?  I think it’s every bit just as much of a compliment to someone’s music whenever it really makes you think, whatever those thoughts end up being.  For what it’s worth – I think Collins And Streiss have straddled both worlds confidently here; if you dig into the lyrics, you’ll definitely hear just how much they have to offer this time around with the words on “Change” – but even if you were to just listen on a surface-level, the bright rhythm & melodies in this song have a ton of appeal that’ll draw people in.  Ultimately, it’s moves like this…combining an important message into a vibe that listeners will absorb, whether at the beginning or over time doesn’t matter – eventually, they’ll hear it all.  That’s the key – evolution by osmosis if we gotta…bottom line is, messages in music like this will sink in at some point.

Keyboards are fantastically well-played, loved the guitar solos and breakdown where the acoustic really gets a moment or two to shine as well…really clever placement on the background vocals and lead-guitars adding strength to the emphasis to the messages in the lyrics & energy of the music perfectly throughout.  Vocal performance is strong all-around, the production is excellent, and I loved that “Change” continued to offer “Change” throughout its length – like even in the final twenty-five seconds or so, you’ll get one last sweetened switch in direction, which actually caps off this whole experience with an insightfully empowering ending.  If anything, I might have wanted about another minute or so of that somehow…but I know that I’m greedy when it comes to hooks that I love; I have the feeling it’s nearly intentional…they could have milked that finale for much, much longer and I doubt they’d ever hear a single complaint about it if they did…but I think they’re saving those fireworks for the live stage.  As it stands, they give you just enough in that final transition for us to get by on…but it IS a highly-addictive ending that you’ll want more of, and an excellent nod to “Change” itself by throwing that powerful last switch in direction in there.  All-in-all, the music echoes the spirit of the lyrics, and perhaps even more-so by the very end because of this, sounding inspired by the future and what’s to come as they exit this new single – almost as if Collins And Streiss know that we’ll get to that “Change” we need around the globe one day.  Great vibes on this tune, great energy, great message – and the best thing about it all, is that it’s designed to reach YOU…to inspire that “Change” and spark it into a blaze within each of us through a song with messages that resonate inside the soul & celebrates what we’re truly capable of – individually, and together, as one.