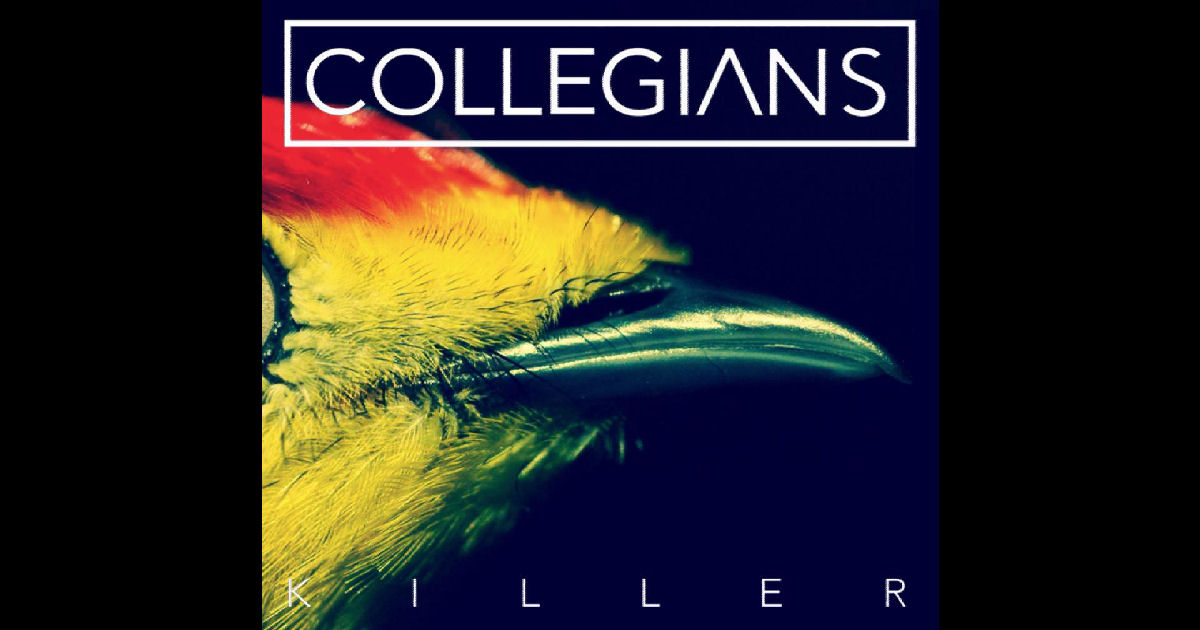 You know something I love?  I love it when I go to a band’s social media pages and find that they’re so incredibly active that it takes several scrolls of a mouse-wheel just to get to the end of the previous week.  Collegians have plenty of reason to be posting so consistently – this crew from Australia has been straight CRUSHING IT since we latched on to their debut single “Vaccine” in September of 2017.  Doing it right, they promoted the hell out of that, then moved to their follow-up cut “Black Mass” at the end of last year, which from what I can tell, sent the wave of support for this band up higher than ever before.  Justifiably, they probably spent a bit more time riding the strength of that second-single and cast themselves an even wider net for their potential with a more accessible sound for the people out there.  You can absolutely feel the continual surge of energy and buzz continuing to surround Collegians…it’s not a matter of ‘if’ this band finds its way to the big-time, it’s completely a matter of ‘when.’

Not gonna lie to ya…I didn’t need more confirmation of this past “Black Mass” but I’m certainly glad to have it!  Collegians are on their way to success without a doubt – “Killer” is definitely my favorite of the three so far.  Suspect I know…they came out with a great debut song, moved on to a second single that helped define and shape the direction & scope of the band’s sound that was even more amazing, and now I’m here again telling you that Collegians have outdone themselves again.  Promise you, I’m not on their payroll – this is a band that’s so focused on making it happen that every positive word I’ve ever said about them is one they’ve fought hard to earn through their hard work & attention to detail.  While “Vaccine” and “Black Mass” put their energy on full-display, “Killer” offers a different dimension to the band’s sound that really builds upon what they’ve already put out there into the world – this time they’re taking on the mid-tempo…and DAMN do they pull off a resounding victory with this new song!

As a fan of all-things-horror – I loved the Carpenter-esque beginning that “Killer” starts with…almost like they’ve got their own Halloween-theme going on throughout the first moments of the song, which pretty much naturally heightens the intensity of listening to a track with a title like this right away.  I found it massively effective…like you feel alert when you’re listening to this song from moment one as if the potential danger is going to somehow come through the speakers or you’re about to get that mysterious phone call from the dude in the Scream mask from the bushes outside your house.  You get the point – the atmosphere is gripping…smart keys from James Leigh do a ton to establish the dark-vein in the tone & the giant drum sounds from Vince Leigh are suppressed, compressed, & brilliantly hitting the mark, making a real impact with each & every hit.  Glenn Patrick is absolutely “Killer” from moment one – this I know for a fact, because I have functional ears; if you’ve got the same set of two strapped to the sides of your head that I do more or less, you’ll come to the same conclusion – there’s not a second of this track where he’s not right on the money and matching the vibe perfectly.  The rhythm and flow of the verse is seriously strong…arguably, the hooks established between the way Patrick sings it and the deadly sound of the music makes for a seriously captivating combination.  They hit the switch and add-in more beef to the chorus through the edgy low-end synth magic fueling the transition – “Killer” uses the loud/quiet dynamic to full-effect…taking a page out of the Garbage playbook in many ways, this entire track has that lingering sound that lasts in the air long past the time it stops, before you repeat it again.

And you WILL repeat this experience…many, many times I’m sure – like I said, we’ve all got ears.  Ears know what’s good for ya.  Mine tell me that there’s absolutely nothing holding back this Australian band from taking over the globe in a couple years or less if they continue on the path they’re on and keep believing that it’s possible.  Everything about the music, the writing, the performances, the production – I mean c’mon, Collegians are completely savage on “Killer” and they’ve once again exceeded the high expectations I’ve got for their music on their new cut.  This band is already ready to become a household-name after only three singles in total – think about that for a second or two will ya?  What Collegians has is so completely rare, compelling to listen to every time, and entirely obvious to those that are listening, that they’re more than able to hang with the mainstream…that they could go on to define it.  Like…LISTEN to the verse happening around the 1:30 mark and the way the lyrics flow…the smart backing vocals from Gerry Leigh…the contrast between the low-end crunch and control of its power…the breakdown and the atmosphere in both the words & music…the finale bring-back and clever timing…the endless hooks and stunning sound – never mind the question of what more could you possibly want – what more could you possibly add to make “Killer” any more extraordinary that it already is?  Collegians rocked every part of this track with a genius-level of focus applied to every second – the spectacular results are continuously wicked to listen to, and once more prove that this band has everything it takes to succeed.  Their new single is “Killer” – but let’s also face facts, this entire band is.

Find out more about Collegians at the official pages below!