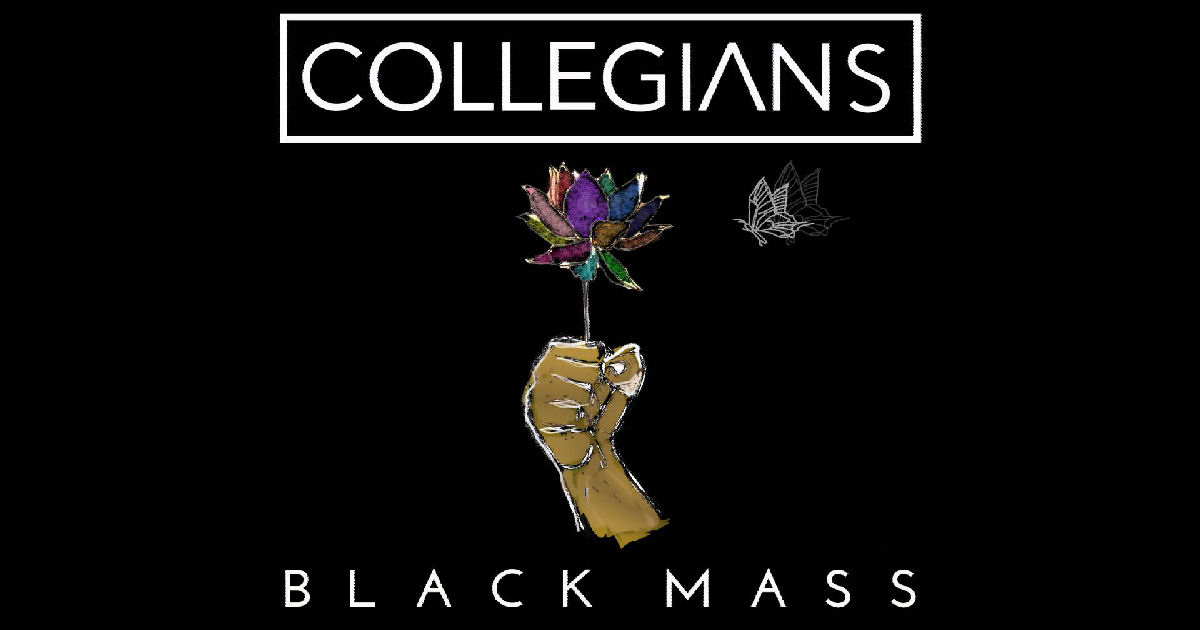 Ha!  Alright guys…I see how it is.  If this is how you wanna play it Collegians, that’s fine with me.  Just know that I’m onto you.

Like hey, look…I mean…if your strategy is to just go out and create mammoth songs that people are absolutely sure to like…then…well…mission accomplished gentlemen, what else can be said?  The new single from alt-rock project Collegians, “Black Mass” is a boot-stomping, crowd-chanting audio-delicacy.

As in delicious, in case that needs clarification – I’m not talking about delicate; Collegians are fired-up in their new single and you can HEAR that in the way they BRING IT to this tune.  From the moment the arpeggio synth-sounds begin, Glenn Patrick starts kicking just as much ass with a rhythmic approach to his vocals that fuel the hooks in the verse.  It sounds stylistic, cool, professional and perfectly produced, beginning in what almost seems like a cross between a modern-day update on the Depeche Mode sound, with the ideas and framework of bands that use big electro-rock structures like Muse, and the anthem-esque tendencies of a band like Imagine Dragons create.  Glenn has an interesting moment around the three-minute mark too where he starts heading into Liam Gallagher’s territory…but that’s a story for another time…let’s just say for now it was an interesting switch in his tone that led to a completely wicked part of the song that was probably my favorite part of the song as well, and leave it at that.  Just wasn’t expecting that & it was a rad moment…figured I’d point it out, cause hey, why not?

If you’ve been following along at our page then you’re already familiar with Collegians, based out of Australia, who rocked the single “Vaccine,” and we reviewed that earlier this year (find it here).  I liked the single, I liked the band, I heard the capabilities and I heard the potential for even more – but I’d be lying to you if I said I was expecting to hear THIS much more in such a short timeframe.  That’s how you know this band is on their game and seriously ready to roll; we were all excited about “Vaccine” and they were probably all snickering and laughing, all like, “Mannnnnnnnn just WAIT until they hear Black Mass!”  And if they were, I wouldn’t blame them – this is a killer tune; no one can resist music like this.

So…alright…let’s unpack this…’cause lots is going right here for Collegians once again this time around for them on their new single “Black Mass.”  If I’ve got this right, rounding out the lineup with lead-singer Glenn, would be Gerry on guitars, James on the keys and Vince keeping it real on the drums.  Glenn does a hero’s job upfront on the mic this time around, absolutely supercharged in his performance.  I liked all the parts he came up with…I was a bit unsure of the ‘ahhhhhhhhhhs’ at first…but I think with context and hearing how the song works, going back to listen to them became an essential part of the experience.  It’s kind of a Weiland/Gallagher mix in its raspy tone…I think that first time you hear it can be a bit jarring with the smoothness of the electro-rock in behind it, but those subsequent times you’ll hear “Black Mass” will likely have you listening to that part with anticipation for all the kickass ways it leads the song into its other dimensions & different transitions along the way.  I like how Gerry’s using the guitar in this cut…the stability of the electro provided by James with the thunderous beats from Vince allows Gerry to get all-kinds of rifftastic with parts similar to like…how Garbage worked in real intense tones and grinding guitar parts that really fit the music.  This is electro-rock after all, let’s not forget that…the guitars might play more of a complementary role on “Black Mass,” but they’re highly inventive.  Gerry’s going to find the reactions to this tune pretty damn interesting I’m sure; again, similar to how the music in Garbage came out, a lot of people just assumed that they were ONLY hearing electro-sounds because of the clever selection of filters, tones and parts they used…so there’s a possibility that his good ol’ pal James is gonna take a lot of the credit out there when it comes to what people ‘think’ they’re hearing.  Just know that when this chorus is in full-rip, Gerry’s contribution is essential…that’s my two-cents on that.  James justifiably does deserve a ton of credit of course, those keys & synth-sounds are the main driving-force in the musical hooks throughout “Black Mass” and the reliable pace & precision that comes with an arpeggio style song keeps everything time-wise, right on-point where it should be.  Not like Vince was gonna let them down any time soon – he completely rocks…but let’s be real here, even HE would love that synth part cause it just makes life easier for him as well as the rest concerned.  They’ve got themselves a solid blueprint, which allows them to innovate & explore their ideas further from there, which they certainly do.  They go big on “Black Mass” in every way it seems that they could have.

And like, how often do you ever find yourself saying THIS:  ‘Wow man…the bridge in that song really stole the show, you dig?’  Oddly, that might actually be the case with “Black Mass.”  From about the 2:55 mark to the 3:30 mark, they lock into the rock-gear for a moment, bringing in those pop-inspired accents to the melody perfectly for a quick break from the way the music completely surrounds you, creating a real noticeable highlight late in the song that shines a bright light on another part of what Collegians are all about, even if just for a moment.  Glenn heads into a Gallagher sound, which is A-ok with me, I think he sounds at his best in this mellower-moment of “Black Mass” and vocally demonstrates that his band is far from one-dimensional no matter where you look or what you’re hearing.  I’m ranting and raving – point being, it’s all about the BRIDGE man, you dig?  That’s what I’m saying; it’s a spectacular moment in “Black Mass” that won’t SELL you, because you’ve already BEEN SOLD for about fifty OTHER reasons already…but it’ll definitely confirm the fact that you already understood what you were hearing was rad.

That kick-in to the beat at thirty-seconds, rad.  The fact that it comes along with one of the song’s best lyrics at the same time?  All the better.  The initial run through the chorus, great energy, love the moment you can feel the low-end presence creep in further and how you can feel it drop away again, creating big dynamics in the sound as “Black Mass” moves, grooves and works its magic.  The hooks in the vocals of the chorus are entirely memorable and instantly have you singing along the moment you hear it come around the second time.  Seriously strong stuff though…”Black Mass” has a completely all-encompassing energy that would fill the entire space of whatever room it’s being played in and threaten the threshold of that room’s capacity for awesomeness.  Really damn good tune…BIG TUNE for Collegians…the scene better be paying attention and ready for these guys…’cause they’re definitely on their way.  “Black Mass” is an enormous song and sure to be a huge hit for Collegians with the people out there.

Find out more about Collegians from their official pages below!