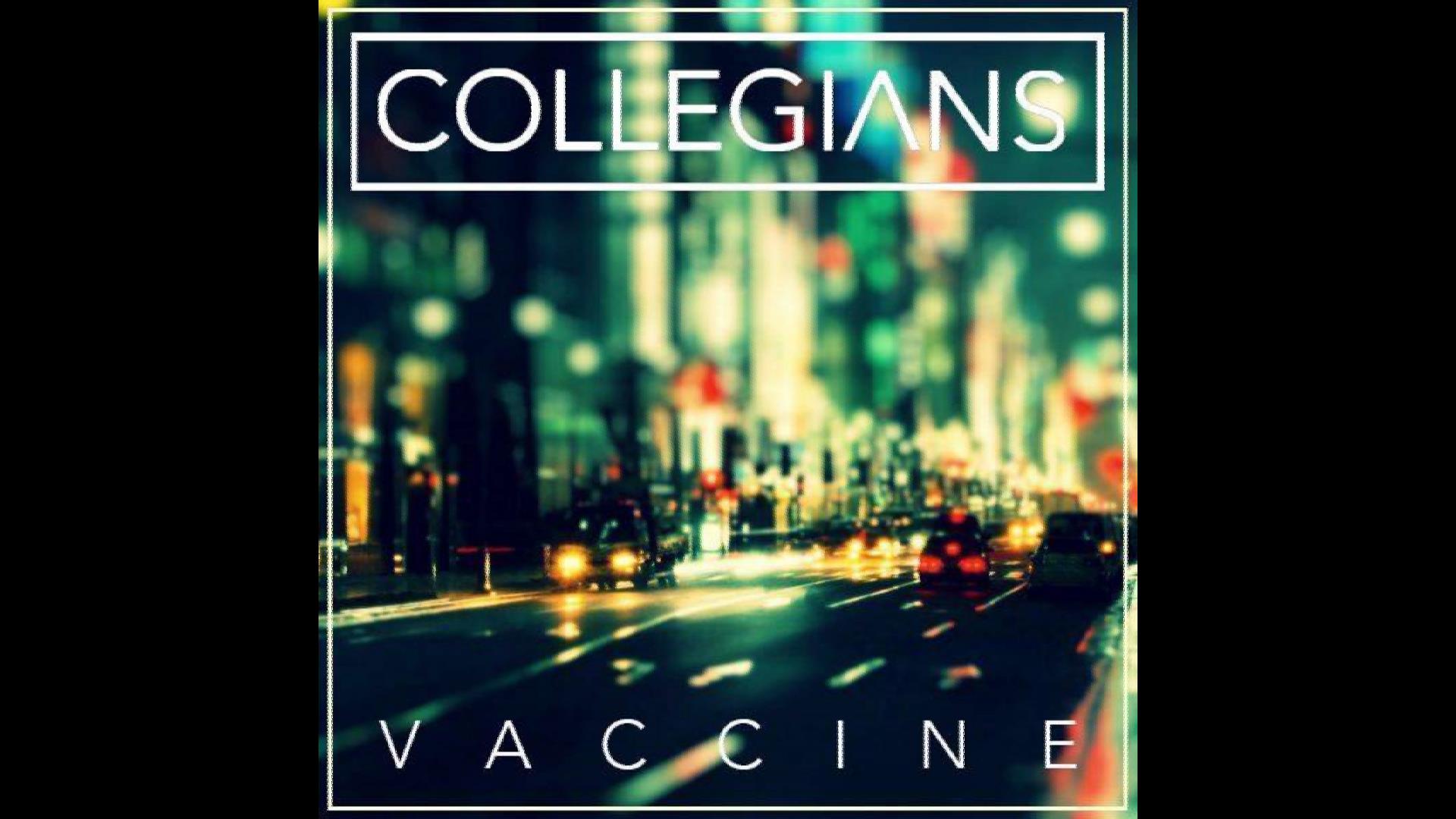 You never know what information is going to stand out to you when you’re a music-reviewer and you start popping open pages & links.  I suppose I’m probably pretty predictable in the sense that I usually end up in the influences of a band or artist, trying to understand how they came to the conclusion that above all others, such-n-such became the number-one name to list…or even in rare cases, agreeing with the choices made.  Anyhow…that could just be me…other people might see other things first; what caught my eye immediately about Collegians was that the band was from Australia – which as I’ve written here in our Canadian-based blog many times, is music-mecca to me – and also that Garbage was listed as an influence.  First of all – shout out to that, because I’m certainly stoked to start seeing legions of bands that were influenced by that rad-ass super-group start to come through the scene.  But secondly…when you list a band like Garbage, what’s the number-one thing that comes to anyone’s mind?  Shirley Manson is the correct answer.  You can argue that all day long and I’ll give you a million more reasons as to why she was the number-one draw of that band – BUT…ultimately for those that know the band & their music well, she was the gateway into something that had much more depth; the entire project was loaded with talent and unique ideas.

So…to wrap this point up…I’m just saying that reading about Garbage being an influence and looking up to see four dudes in the promo-picture for Collegians was an unexpected twist; with that inclusion, I was definitely expecting to see a female-lead for a moment there…and then when I pushed play on the new single from Collegians called “Vaccine” – I audibly understood their sound & style much more clearly than trying to wrap my head around the written details about what this Aussie crew was going to sound like.  Someone out there…I’m not sure if it’s a person in the band or one massively slick person in promotions that like, REALLY knows their stuff – but the Collegians have nailed it in their influences; the full list went on to include bands like Muse, Imagine Dragons and Depeche Mode along with Garbage.

That’s brilliant.  If someone out there can come up with a better ‘sounds-like’ in a combination of four bands to describe what Collegians have going on with their new song “Vaccine” I’ll eat my hat.  I can absolutely hear the influence of all four of those bands on the Collegians sound…and I can hear that as a result of combining these versatile influences, that they’ve been able to carve-out their own sound that takes many of those influences further into a new evolution.  The best thing about mining & exploring a sound like Garbage had…is that the more distantly you reach into their timeline, the more relevant they are for today.  I think over time as that band went on they attempted to morph themselves too much into what they thought we wanted as fans…but if you head back to their beginnings, you’ll find a band that was so far ahead of their time that those records still more than hold up now.  Collegians is proof of that in a sense…I was blown away by just how much Garbage you can hear in the music…the solid edge of an influence that has infiltrated the sound perfectly without taking their own identity away.  As “Vaccine” started, I was immediately pulled into the keyboards from James Leigh…they’re locked into the Garbage sounds & tones that made the band’s rock-electro vibe so successful and he instantly puts an authentic electricity into this song you can feel running right through you.

Then you get the ultra-smooth vocals from Glenn Patrick, which helps change what sounds heavily influenced into more of their own thing through the tones of his vocals.  Writing & structure wise, you could definitely argue that the chorus has a Garbage-esque approach…the verse perhaps leans more towards that Imagine Dragons influence for sure.  The combination of those two main sources of inspiration results in a huge, dynamic and powerful sound on “Vaccine” that’s gripping and explorative.  Glenn sounds absolutely awesome at every moment, the range of his vocals fits the mood of the music solidly through the energy & tone – and the charismatic nature of this song’s structuring leads him to wicked moments where he really gets to let those vocals loose.  The pull of the hook in the chorus is completely accessible…people are going to definitely dig these guys.

Solidly reliable on the drums, Vince Leigh keeps these guys in-line through the snapping snare…Gerry Leigh finds rad guitar chops to include…much again like you’d hear in a Garbage tune, accenting the music more than driving it…nothing wrong with that whatsoever – the bursts of crunch & distortion you get completely help bring this song alive.  Hard to take the ears off of what Glenn and James are pulling off in “Vaccine” as they are certainly leading the charge on this cut…but there’s no doubt about the band being a tight one after listening to how well they all fit into this tune.  They transition with added power, harmonies & hooks…and ultimately, it sounds effortless – and you’ve got to give Collegians credit for that.  While they’ve brought up a bunch of comparisons I completely agree with – recognize that Collegians are STARTING themselves out of the blocks, off and running with a sound that works.  Easily comparable in quality and sound to much of what is already extremely successful in the mainstream – let’s seriously not forget that “Vaccine” is the DEBUT single from Collegians.  All indications would point to this band having a huge chance to make it; they’re coming out sounding completely ready to take on the world with “Vaccine” – and they very well might have to brace themselves for the ride & adventure that could follow if their upcoming record & singles catch on as they should.

That’s right…I said ‘as they SHOULD’ – and I’m saying that because there’s no reason on earth I can think of that Collegians shouldn’t catch on if their overall sound is anything close to what we hear on “Vaccine.”  This is a sound/style you already know and LOVE…and Collegians are already doing it better than most of the bands that you’d find in their genre…they’ve given you no reason not to dig what they’re doing on “Vaccine,” from performance to production they’re killin’ it.  Impressed with the giant sound of the song’s biggest moments…equally impressed with the amount of different parts & instrumentation included in the song…the powerful vocals soar…the breakdowns are perfect, the bring-backs are massively rewarding to listen to.  Collegians have done enough to stand out as their own sound while still building upon the foundation set by the artists/bands that have paved the way for them to exist in the electro-rock universe…and straight-up, “Vaccine” has the energy, tension, push & pull that makes music truly exciting to listen to.  From the multiple layers in the music, to the lead-vocals and harmonies in the background swirling together – Collegians are making a multi-dimensional effort to give your ears the next evolution in the sound of electro-rock…and I have a feeling it could really pay off for them.  Once these guys break out of the gate…there will be no putting the door back on the hinges; they’ve got all the potential, skill and sound required to detonate the music-scene into a new direction.

Definitely interested in where Collegians are heading; it’s natural to hear the most of our influences show up in our debut material & I certainly don’t hold that against this band; they’re definitely not a carbon-copy of any one thing out there…but undeniably, as they continue on and step out more into their own through experience…they could become a seriously unique force to be reckoned with.