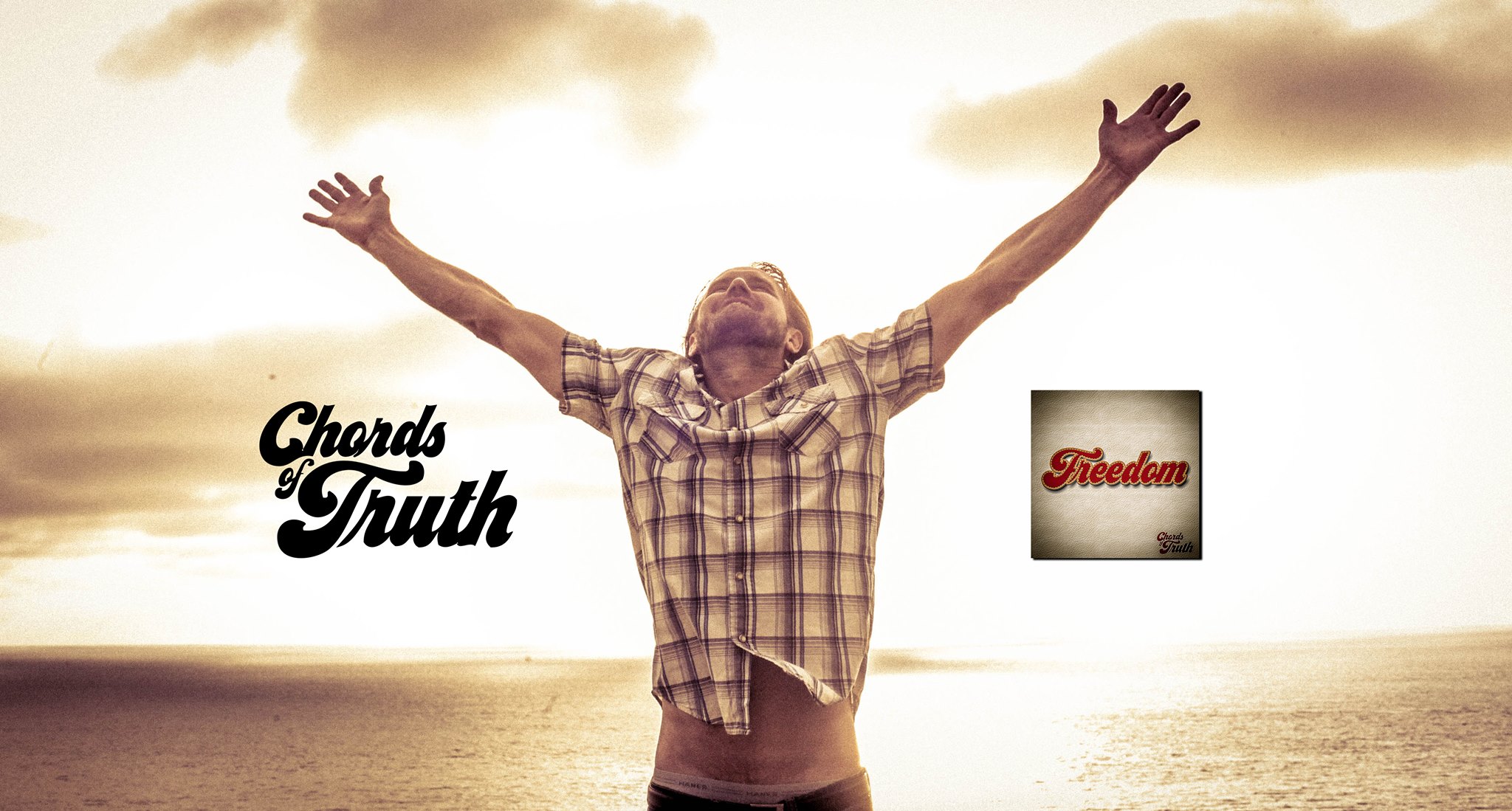 Having reviewed much of the music of Jason Garriotte in his project Chords Of Truth, it’s been great to hear different samples of what the man has been capable of in addition to listening to him grow and evolve his music-career as time marches on.  He’s definitely a thinker…and I like that; a lot of Garriotte’s music has smart social connotation and communication in his lyrics.  He comes at life from what seems to be a curious but positive perspective…unafraid to ask questions or make observations through his music – and I’ve always appreciated that about what he’s been doing in Chords Of Truth.

Let me say this though…and then I’ll actually talk about the new-single “Freedom” by Chords Of Truth…but I want to make one more quick point about what I’m hearing in this project right now – I really, really like where Jason is heading with his latest tunes.  I had great things to say about his last ambitious track “Wonder” and I’ve been very excited by what I’ve been hearing producer Jef Joslin bring to the music & sound of Chords Of Truth – personally, I think Jef’s got Jason sounding better than ever and is really helping him bring these songs to a life in the spotlight they deserve.

The first thing that impressed me was the lyrics this time around – so props to Garriotte for that.  When it first started up its hooks, rhythm & completely solid-groove and he kept repeating ‘Freedom is..’ at the beginning…I was intrigued but not so quickly convinced that he was necessarily going to add on to the idea after that point.  The lines that follow the initial pondering are freakin’ brilliant as he answers the probing thought by explaining it’s ‘undefined, no one can tell you what it means because it’s a state of mind’ – that’s a genius line right there.  Rhythmically, Jason also nails the flow and melody of these words to perfection with excellent background harmonies strengthening the sweetness in the sound.  “Freedom” is quickly catchy and a ton of fun to groove & move to…the kind of song that has you proudly singing along by the time the hooks roll around in the chorus by the time they come around a second time.

With its catchy & flashy sound and Garriotte’s committed performance – “Freedom” is sure to win you over.  He’s done a great job once again at providing astute observations and commentary laced into the words while contrasting deep thoughts with a rhythm that is all-out fun.  And I gotta admit…for what sounds like it would typically be a more ‘standard’ style of plonking bass-line…the performance on “Freedom” makes this ‘standard’ spring to vibrant life through its incredible attitude, tone & enthusiasm throughout the song.  Jef Joslin even takes a quick break from behind the boards producing to lay down a sweet guitar solo before the final verse begins, adding in a perfectly crisp crunch of slightly distorted blues-rock into this socially-aware folk-tune.  As I mentioned and will continue to mention until they prove me wrong – the combination of talent and ears-for-music that Jef and Jason have together is a collaboration that is completely working in favor of the sound, writing and music.

“Freedom” has that spirited hippie-vibe that throws back to the old-days when people were first knocking down the walls in society’s rules, questioning leadership and taking the land back for ourselves.  It’s a celebration of the most blissful part of being a human-being…and I don’t think that Jason could have possibly defined what “Freedom” is better than he has by explaining its inability to BE defined and how that “Freedom” really can never be taken away from us, no matter where we are.  Made me think of an incredibly inspiring documentary I watched not too long ago called The Fear Of 13 about a man named Nick Yarris who spent the majority of his life wrongly imprisoned but never gave up on the idea that through his mind, he could still be free.  Because it truly IS a state a mind…no matter what the odds against us are…that escape, that “Freedom” is something we can always get to if we just close our eyes.

I feel like in a way…”Freedom” wouldn’t normally be my thing in its like, bluegrass/blues-rock folk-indie sound…but I’d never deny digging this tune.  Chords Of Truth has created an incredibly groovy rhythm here that absolutely brings a smile to your face, with thoughts and observations in the lyrics that are powerful enough in their imagery & descriptions to really make you think – and that’s always a real home-run in my books when it comes to songwriting.  Great job on “Freedom” – totally dig this vibe.

Find out more from the official homepage for Chords Of Truth:  http://www.chordsoftruth.com/