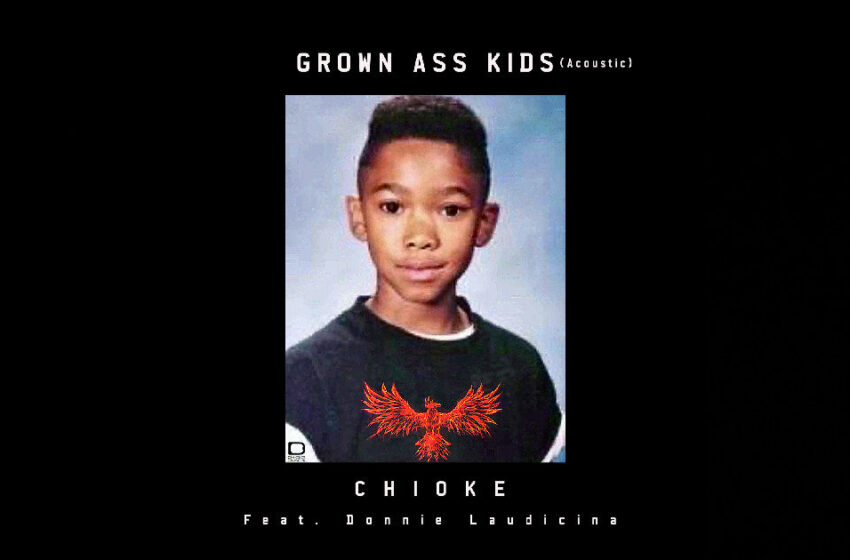 It’s been so much longer than a minute since we last had Chioke Dmachi featured on our pages, it’s like his promotion team completely forgot he was ever here, or to say hello on the way in the door!  And here I thought we were considered part of the family at this point *sniff *sniff.  I’m kidding around of course – I’m so used to the black hole of anonymity that is the internet, that this stuff never phases me.

Anyhow.  Y’all know we pack receipts here – always have, always will.  You can check out my thoughts on Chioke’s previous EP called Heartless Reign from way back in 2018 by clicking your mouse right here.

Good tune though – “Grown Ass Kids” (Acoustic) gets its official release this July on the 14th, and features Donnie Laudicina along with Chioke.  While it’s definitely not exclusively acoustic as the title claims, it is spare in the sense that it’s really just a couple layers of guitar and a couple layers of vocals in the mix…no full band or anything like that.  But yeah…for record, if that’s what the kids are calling acoustic these days, I’m much older than I thought…because at least one of those guitar layers, is definitely plugged in.  Anyhow.  Labels are what they are, and they mean nothing to me – ever.  I just know what I like to listen to and what I don’t – and I like this tune here.  For the record, I liked what I had heard from Dmachi back in the day when I listened to Heartless Reign, and he’s much more of a grown ass kid now that he would have been then, know what I mean?  Heck – I’m older than dirt now at this point, so he’s gotta at least have put on a couple more years and a few more miles under his belt, right?  I can’t be the only one.  Anyhow…while “Grown Ass Kids” might be sparse with what’s included, each element you’ll find involved is used to maximum effect – and Chioke’s vocals in particular, sound even better than I remember them being way back in 2018 when I reviewed his EP.  This is an extremely confident performance, and justifiably so – the material is so strong that no full band is required, and this ain’t a cut that’ll have you wishing for anything more than exactly what you’ll find included already.

It’s a stellar example of how you don’t always need to recreate the wheel in order to stand out – in fact, sometimes it’s the simplest ingredients that lead to the most complete results, and that’s really what you’ll find when it comes to “Grown Ass Kids.”  Smartly designed, this is one of those cuts that builds really smartly as it plays on, going from the delicate nature of its gentle beginning to the intense and dramatic finale that it reaches.  Highlighted by the punch the guitar adds to the mix as “Grown Ass Kids” shifts its direction just past the two-minute mark, essentially taking what could be described as a soulful tune into more distinct Alternative terrain.  Whatever ya wanna call it, it’s not only effective, it’s pretty much a triumph – Dmachi’s vocals are world-class in the way he sings this song, and even though there’s not a whole lot goin’ on surrounding him in the music, he uses the extra space to his advantage here.  A lot of artists tend to shrink in that same amount of space, almost recoiling from the opportunity to be heard…but not Chioke – this dude is belting out the best vocals I’ve heard from him to-date & embracing his ability to be the star of the show, as he should be.  When preparation meets opportunity, you give it everything you’ve got right?  That’s what you’re hearing from the man on “Grown Ass Kids” for sure.  Well…that, plus a little time & more experience too, right?  It has been nearly four years since we last had Chioke on our pages and his music in our speakers over here…but though he might have been gone, he certainly hasn’t been forgotten by me.  I’m stoked to have this guy back in action behind the mic where he belongs, being that “phoenix rising up again,” as he should be…Dmachi’s loaded with talent that he can’t keep secret from the world, and a track like “Grown Ass Kids” proves anyone could hear it.

He’s done an exceptional job on this track – Donnie too of course…I mean, that’s the reality…there are no flaws to be found on this single, so you gotta assume anyone involved certainly held their own, right?  Word on the street is that “Grown Ass Kids” is the first single of a bunch more music to follow this year from Chioke Dmachi…or at least, more music SOON…I don’t actually have the details on when at the moment, but I assume we’re talkin’ about this year, or very close to that.  Either way – sounds like more music to come, and it sounds like Dmachi is about to surge into his best years as an artist right ahead of us.  All I know is that if any of the rest to follow sounds half as good as this single does, I’m 100% here for it – “Grown Ass Kids” is already probably my favorite cut in his catalog to-date – he nailed this single.