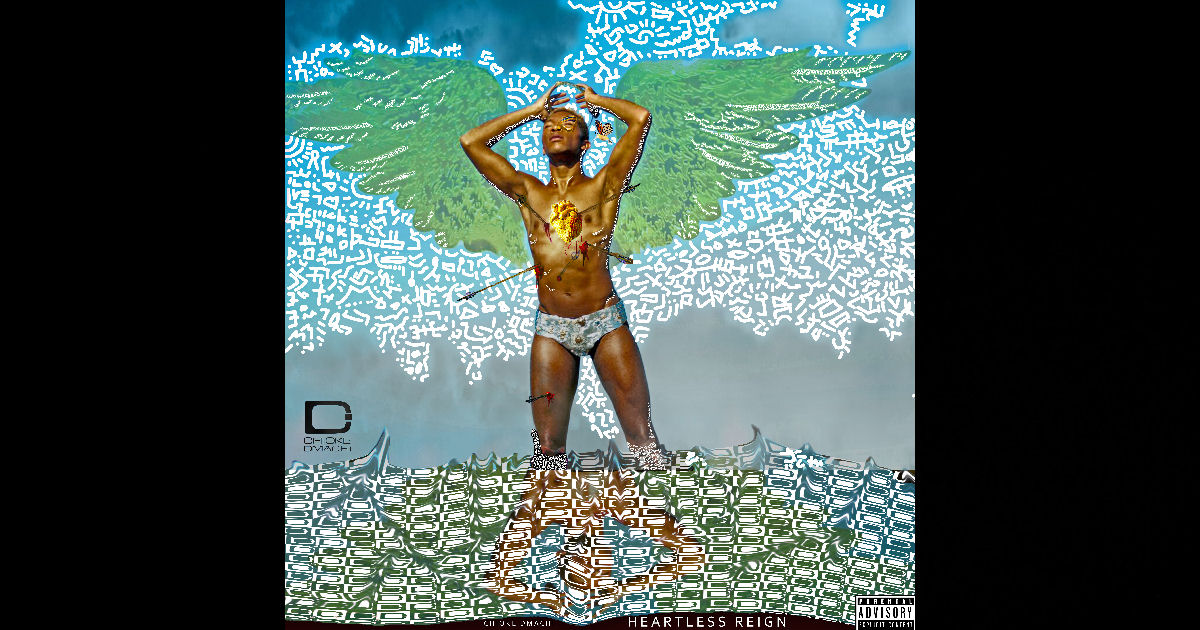 Alrighty…before we begin here I’ll pass on some details you’ll wanna know about the new EP Heartless Reign by artist Chioke Dmachi.  For starters, the record doesn’t get officially released until November 11th this year – BUT…the pre-order campaign begins on October 10th just around the corner and you can also check out the lead-single “Rain” already at iTunes.  Besides all that – you can never be too early and there’s never a wrong time to promote your music…so good on Chioke Dmachi for being well-organized.  Makes sense to be on schedule when you got as much goin’ on as this dude does – if you have a look at his pages & social media etc., you’ll find Chioke on everything from Facebook to a full decade’s worth of credits over at his page on IMDB for his work onscreen.  He’s even been on House!  Love that show.

Anyhow…there’s a bit of history for ya…back to the music.  Let’s see what Heartless Reign is all about.

Being a pre-release & all…don’t quote me on the official order of the songs you’ll find on Chioke’s new EP, as things could change, you never know…I’m just going by the notes I’ve got here.  As of right now if you look at the main website, you’ll see the title of the EP listed in three different ways – so believe me, there’s still some stuff to be sorted out in between now and November when it gets it official release.  I started with a track called “Heartless,” which immediately revealed the energetic style & sound that he’s working with – but also the high-level of professionalism in him as an artist/performer & the quality in the production provided by Sam Smyers.  One of those records where regardless of whether or not the particular style is your jam or not regularly, you can’t help but admire just how shiny, bold, & beautifully engaging the overall sound of Heartless Reign really is & the sonic depth it contains within.  We’re talking immediately enticing when it comes to “Heartless” – right from the drop you can hear from the textures in the music & vocals that you’re in for an experience that’s bound to connect – and this does.  Boosted by an inspired performance from guest-star Terry Dexter, the way her vocals complement what Chioke is doing works 100% – and straight-up, she takes the giant hooks in the chorus to the next-level the writing deserves.  Together, they create a memorable highlight that stands-out for all the right reasons…I think Chioke instantly reveals his star-quality with a brilliant performance on the mic, adding in the perfect dose of edge or emotion whenever the words call for it.  Extremely versatile, you get a sense of the range he has and definitely get a huge sample of his commitment & focus – everything about “Heartless” is right on the money from the mix of the music to what’s happening on the microphone from both of the incredible voices on this cut – definitely a stunning first impression.

No doubt that this guy is working with a fusion of sound that’ll attract all the right attention.  I think both “Heartless” and “Crown” would make killer choices as singles as well; considering the fact that “Rain” is already out there…you gotta dig the fact that Chioke is spoiled for choice when it comes to what he could release to the people out there as the gateway into his new EP single-wise.  “Crown” takes that signature R&B/Pop/Electro style Chioke thrives in, and adds a bit more club, celebration, and cleverness to this composition.  I mean if you’re asking me personally, I’m probably still a bit more partial to “Heartless” as my ultimate favorite or what I’d consider to be the most accessible cut on a universal scale – but I really love the energy that Chioke puts into both these first two tunes in review.  I don’t know what his own opinion is on how far he’s gone with his career as an actor to this point in life – but I can definitely wonder what might have happened if he’d spent the last ten solely dedicated to music alone – you can hear the ‘it’ factor in this entertainer all the way through the vibe of “Crown” and how comfortable & confident he is in this setting.  You can even hear it directly in the words he’s singing on this tune – he knows he’s right where he’s supposed to be on “Crown” – everything about this guy screams that he belongs in music.  No faults or flaws in this tune either & nothing I’d even remotely change – Chioke sounds incredible and fully in control to match the empowered theme in the lyrics.  Probably the most danceable cut on his new EP as well – “Crown” will keep you movin’ & groovin’ on the floor, but also still manages to provide a ton of sincerity through Chioke’s performance.  Smart moves like you’ll find in the breakdown also create additional diversity in the sound that’ll definitely satisfy those looking for more than just another verse/chorus/verse artist – this guy puts a lot of thought into the decisions he’s making as a songwriter & performer, and as a result, there’s lots to keep you & your ears interested & stoked to hear whatever might come next on the Heartless Reign EP.

“Right Now” would probably be the candidate for ‘meatiest’ track on the new EP…I think Chioke’s done a great job of adding emotion into his music so far on Heartless Reign, but it’s definitely undeniable how powerfully it translates on this third tune in review here.  You can feel the weight of this song hang suspended in the air, like everything has been on Chioke’s shoulders for years and he’s engaged in the ultimate act of rebellion by shedding the burden and breaking through to that next-level creatively & personally.  Dude can really sing too…I think “Right Now” will likely prove that to people more than any other song on this EP – some of the high-notes he’s hitting at the end of this tune really show the heights of his spectacular range.  And from my point of view, I gotta say, I absolutely love the way he does it all…let’s be honest, he’s right on the edge of his threshold here, adding in just a hint of rasp that shows these superhuman notes are coming from an actual human-being with a real heart.  There’s no doubt that going deeper like this tends to narrow the audience and take a song like “Right Now” out of the running as a single – at least at the very beginning; that’s the magic of songwriting as strong as this – “Right Now” could very well be the tune on Heartless Reign that ends up lasting longer on playlists than any other as time goes on.  There’s a ton about this tune that makes it become epically emotional, bold, and powerful – “Right Now” reaches for a darker sound in the atmosphere & mood, succeeding through a slower & sleeker movement that allows Chioke to go after some real big moments in the spotlight.  Stressing the importance of the moment in the intensity of his words & vocals – “Right Now” is all about going after love with everything you’ve got – no matter how much it might scare you to do so.  Musically, I think “Right Now” is freakin’ aces all-around – I think the drum sounds are brilliant, the entire song has such a magnificently defined atmosphere that envelops & surrounds us as listeners.  And I can’t stress this enough…I think Chioke is absolutely incredible on this song…the ending of this song is completely breathtaking…it’s so final, so conclusive.  Every time it ended as I was listening, it felt like my world came to a full-stop the moment “Right Now” was over…seriously stylistic & cool tune from start to finish – love the editing on this cut.

Was he nuts to release “Rain” as the lead-single?  Maybe!  I think it’s got some really great ideas, but aside from “Right Now” being less of a single-style cut & reaching for something more – I’d probably have gone with either “Heartless” or “Crown” if it had been up to me.  And don’t get me wrong, I’m certainly not complaining…I think there are verifiable highlights on “Rain” as well, and ultimately, I think there’s an argument to be made that ANY of these tunes would make for a qualified single out there that’ll grab the attention of the people listening, all for their own different reasons as well.  There is a looser feeling or more freedom of expression at work on “Rain” than you’ll find on the other tunes; which may/may-not make it a bit more difficult for the average set of ears to follow along with as easily as the other tunes before it – but…I think the highlights of this song are definitely appealing and will be noticed by many.  There’s much of a similarity in the approach to the opening to a song like “Hide And Seek” by Imogen Heap…which in itself is quite remarkable given how many ways these two artists are different from each other beyond the male/female thing.  But this is where you start to realize that there could be a Jason Derulo style of an artist in Chioke as well if he wanted to go that route full-on.  Certainly no harm in a comparison like that, Derulo is one heck of an entertainer & singer and everything that Chioke is doing on “Rain” proves he’s more than capable of hanging with a crowd of that caliber, or even leading the way.  He brings an art to the way he moves through “Rain” – and ultimately, that seems to reflect the fact that Chioke Dmachi is looking to do things differently than the rest – which I really like & respect.  As a lead-single, “Rain” has definitely got multiple reasons on display as to why you’ll be attracted to the sound – but it’s the heart that’s put into a song like this, and on this EP, that seems to make the most impact on me personally.  Essentially, rather than put out a lead-single that has all the easiest hooks to like…say something like “Crown” – he’s put out “Rain” instead, which really shines a bright light on the colorfully expressive & creative artist he’s proven to be on Heartless Reign.  A song that really represents the versatile, dynamic, and artistic aspects of his style & sound – “Rain” sinks in much deeper than regular Pop or R&B will do…Chioke Dmachi is making music/art that’s sure to last.