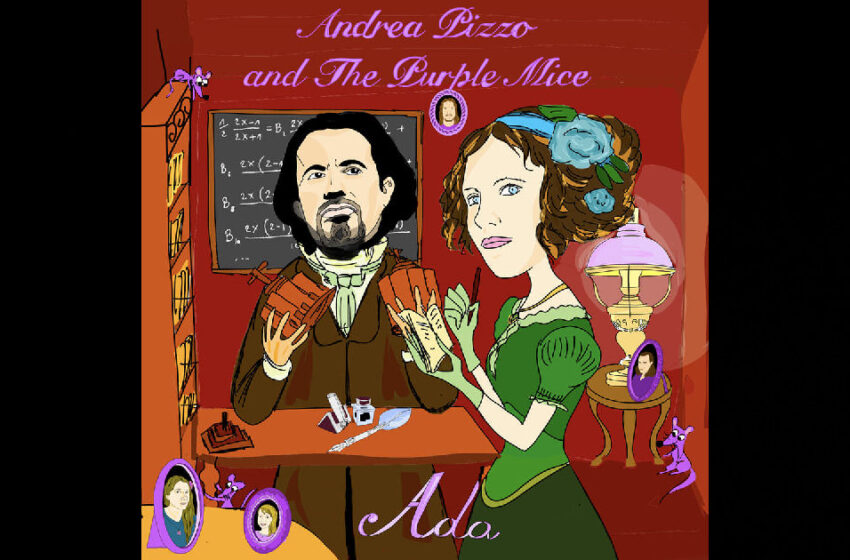 While I’m fairly certain any listener out there would have many different opinions on what they hear in the music being made by Andrea Pizzo And The Purple Mice, I feel like we’d all have to at the very least conclude that what we’re hearing from this band falls squarely into the category of audible art.  In other words, it’s a style of sound that’s about as anti-typical as you could potentially imagine, one that’s likely fair to describe as an acquired taste…but like all-things-acquired, once you’ve got a grip on it, you start to really appreciate what you’ve found in a totally different light.  As I’ve checked out different singles from this band over the past year as they worked their way towards their debut album Potatoes On Mars from earlier in 2022, and now having had a listen to this new split-single record they’ve housed two songs on under the name of Ada…I feel like I can confidently say that I’ve acquired the taste for this band & their tunes.  They’re undoubtedly strange in many ways, but I seem to enjoy the strange side of sound…so as far as I’m concerned, I’ll always have some room for Andrea Pizzo And The Purple Mice. 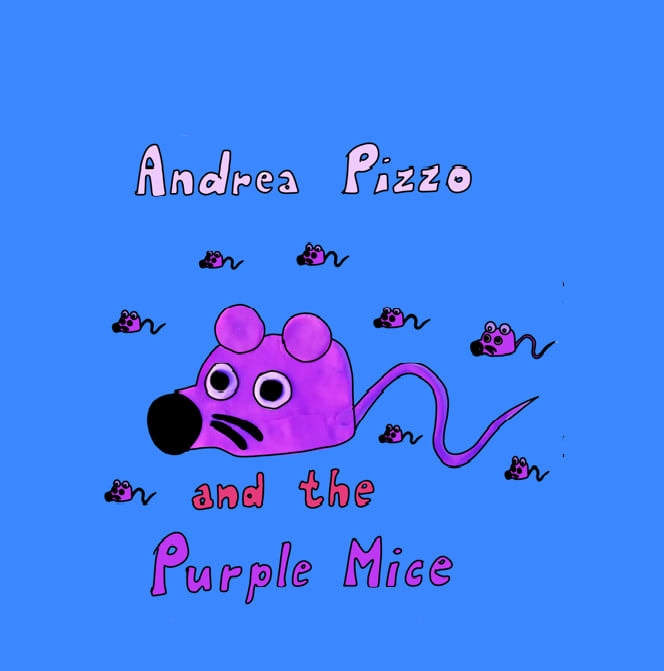 That being said, if you had told me that I’d be enjoying a song about a mathematician this year, I’m sure I would have laughed out loud.  Not because it’s impossible, but I would have assumed it would be very, very unlikely – math and I do not get along…never have, never will.  So to find out I enjoyed “Ada,” a song dedicated to Ada Byron, who is apparently, historically known as the world’s first programmer and a mathematician…I mean…lemme tell ya directly – I actually wasn’t expecting to really dig this song at all, and I ended up loving it.  While the subject matter and I are at polar opposite ends of the spectrum when it comes to what I’d choose to learn about & usually enjoy – I could tell from the very first seconds of “Ada” that I was going to really like what I found in this tune.  The melody of the music is straight-up fantastic…outright irresistible if you ask me – and I’ve got massive respect for Andrea Pizzo taking on such a subject/theme like this with such inherent complexity to the words, and making this experience genuinely beautiful.  It’s no easy task y’all – and when you have a listen for yourselves, you’ll understand exactly what I mean…this took serious effort, dedication, and thought.  Anything worth putting your heart into SHOULD be though, am I right?  Andrea Pizzo And The Purple Mice don’t make music to take the easy road with a couple of bar-chords and a simple beat – they create luscious tapestries of inventive sound that evoke imagination and the authentic wonder of the musical realm.  Adding in the vocals of Silvia Criscenzo certainly wasn’t a bad idea either – she’s extraordinary!  She absolutely knocked this out of the park and gives “Ada” a stunning level of sincerity that is bound to connect to the hearts and minds that listen.  Andrea is as off-the-wall as he usually is…but his unpredictability in that regard is nearly to be expected – if you thought he was just gonna go the normal route at this point, you clearly haven’t been paying attention.  The man blazes his own trail as a vocalist & singer…and I fully respect that.  I’ll always readily acknowledge he’s the acquired taste I mentioned earlier, but once you’ve acquired it, you look forward to his uniqueness and the zany way he chooses to sing his songs.  At the end of the day, while he usually reaches for notes you wouldn’t expect him to, or to find in any tune really, you can’t argue with the fact that he knows what he wants to do, stays locked into the key & tones he’s looking for, and delivers us all something different than we find in just about anything else you could possibly listen to.  The value of identity, is never something to sneer at…it’s practically impossible to create with so much music out there, and yet, there’s no way you could mistake Andrea Pizzo And The Purple Mice for anything else. That’s impressive y’all – it’s a true achievement.  I really love the way that Silvia & Andrea sing this song – credit where credit is due, it’s impeccably written, and superbly played by everyone involved with it.  The bass-lines are outstanding, the guitar solo is genius, the vocal melodies in the hooks are everlasting.

The most you’ll find me conceding to you, is that having Silvia’s remarkable guest-star appearance on “Ada” makes you miss her in the second of two songs on this single, “The Boys From Silicon Valley.”  I don’t mind this cut at all…but I’ll admit, it’s a very distant second place when compared to the undeniable beauty of a song like “Ada.”  Which makes its inclusion here a bit more puzzling, but I suppose thematically, I can draw the line from point-A to point-B – “The Boys From Silicon Valley” simply wouldn’t exist without a pioneer like Ada Byron to begin with.  So the inclusion of this second cut does make sense when it comes right down to it…and quality-wise, when it comes to the execution and production, Andrea Pizzo And The Purple Mice never drop the ball.  They bring everything they’ve got to what they do, and that’s been a constant we can all rely on in the music they’re making.  It might be a whole lot different than the vast majority of everything else on your playlist – but don’t mistake uniqueness for any kind of laziness…this band is anything but lazy, and puts in a superhuman amount of effort into songs that would be a tough sell to the masses; that’s the reality.  Like I said at the start, it’s audible art – and that naturally means a whole lot of polarizing opinions on the results we find.  I’m proud to say I’ve acquired the taste for Andrea Pizzo And The Purple Mice…honestly, I think my life is better for it, and my musical palette has been expanded thanks to them.  I love the keys in “The Boys From Silicon Valley,” I love the irresistible bass-lines, I feel like the hooks of the chorus are genuinely strong once again…there are lots of positives here in this second track, even if it doesn’t quite reach the same heights of captivation & mesmerizing beauty that “Ada” does beforehand.  Lyrically, it’s quite compelling stuff without a doubt, and musically, it’s got serious groove to it.  Uniqueness really does have its own orbit of allure…and as out of this world as this band can sound, they’ve got a gravitational pull of their own unlike anyone else, and I’m very happy to have been sucked right into it once again.

Find out more about Andrea Pizzo And The Purple Mice from the official website at:  https://andreapizzo1977.wixsite.com/purplemice 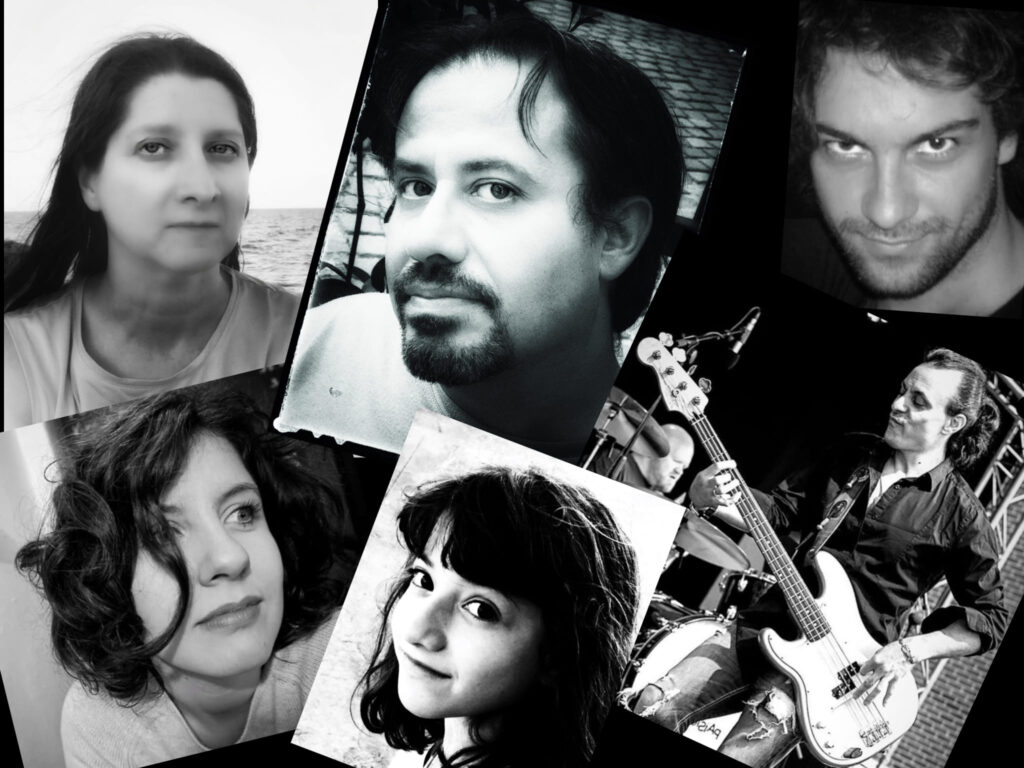