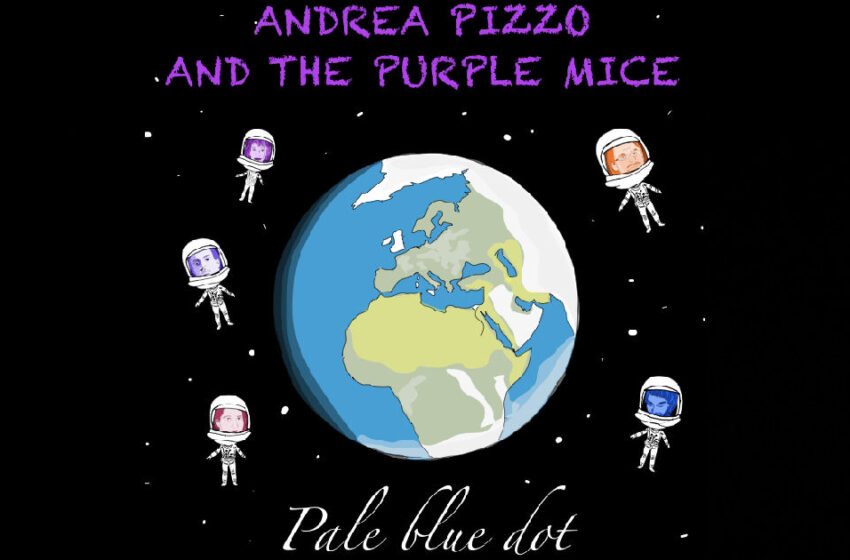 As I get older and increasingly more forgetful at what quite often feelings like a frightening pace, I sure find myself appreciating bands like this one a whole lot more.  I might have trouble recalling the occasional detail or comparison I wanna make every so often – but there’s no way on this “Pale Blue Dot” that I’m ever gonna have any issues remembering the name of Andrea Pizzo And The Purple Mice.  Make no mistake dear readers, dear friends – the value in a unique name is priceless – I cannot even begin to describe how just about each and every day over here on this side of the screen I end up trying to track down some band or artist in Google and find there are fifty of’em that go by the same name.  We’re not gonna ever have that problem with Andrea Pizzo And The Purple Mice – there’s only ever gonna be one of these from now until the end of time I’d suspect.  Seems trivial perhaps, but I can’t tell ya how much that actually puts them ahead of the rest when it comes to how people search for music and listen to it online…if you’ve got the same name as someone else – or worse, several someone elses – believe me…the average everyday listener will abandon their searches right quick if things aren’t clear enough.  When someone out there searches for Andrea Pizzo And The Purple Mice, they’ll find exactly what they were looking for – and a uniqueness in the music that rivals the name of the band for sure.

I found this single to be seriously interesting and engaging to listen to.  On the one hand, I can hear that it’s not gonna be the typical ‘single’ many folks are used to finding out there – and I get that – but by the same token, listeners don’t end up often finding a theme as substantial as this, or music that’s this decisively different than so much of what you’ll find out there.  Yes a song like “Pale Blue Dot” is likely gonna take a few people out there a spin or two to even wrap their mind around when it comes to the structure, sound, and design – it’s different, yes – but different can be such a fantastic thing when it comes to the creation of exciting new art.  Andrea Pizzo And The Purple Mice more than hold their own when it comes to their musicianship…and just because you might not find a typical sing-along song with easy-to-digest hooks doesn’t mean you’re not gonna love what you find here in “Pale Blue Dot” – the focus is simply weighted more heavily on other elements.  The fusion between art & music for one, the balance between story and song another – and perhaps more importantly than anything else, the message that’s ultimately being communicated in a song like this…or more accurately, messages – plural.  “Pale Blue Dot” is a brilliantly insightful tune when it comes right down to it – lyrically, I think it’s absolutely aces in every way; it’s a reminder of just how insignificant we can be, yet how important we are as well.  Looking at this “Pale Blue Dot” on a macro level, like from out there with Major Tom spinning in his tin can in outer space, the idea that any single one of us would stand out somehow, is of course as ridiculous as it is impossible – but the closer we zoom in, the more we see, the more we understand how one life affects another, and how we as humans affect the “Pale Blue Dot” we’re living on as well.  This single cleverly dives into a whole bunch of this…cycling through a full list of the many types of people who have inhabited our planet – and how we’re all bonded by this same “mote of dust” and the experience of living on Earth together, no matter how close or far away we are to each other.  It’s a song that reminds us just how infinite & big the universe is, while at the same time, going great lengths to make a case for just how important & crucial it is to care for this “Pale Blue Dot” we’re floating on…to preserve its specialness and protect it – from ourselves, really.  Andrea Pizzo And The Purple Nice take you some of the good, some of the bad…they prove through their lyrical imagery that this “Pale Blue Dot” is certainly worth caring for more than we have, and highlight all that makes it every bit as great in that close-up view as they do remind us that we’re just a speck of dust in the universe at the same time.  I love that they go into a bit of the devastating aspects of humanity…conflict, violence, and war & whatnot…I don’t think they could have made their main points regarding that any better than they have – because when you look at the true splendor of the universe and all of its beauty combined – it’s straight up silly that we’ve spent so much time on slashing our swords and blowing things up, ain’t it?  Musically, it’s a very unique tune as well – part Indie, part Folk, and partly like a theatrical experience of sorts – it’s gonna be different than just about everything you tend to listen to – but that’s kinda been the point I’ve been making all along – there’s only one Andrea Pizzo And The Purple Mice.  All-in-all though, you’re not gonna find any complaints from me – not because it’s Christmas, but because it’s a really well thought-out song from the concept to the execution of their multi-dimensional sound.  Bonus points for the extra spoken word sample mid-song…another strong addition to what’s been a stellar set of artistically inclined ideas, a core theme that will resonate with you and have you considering the role you play on this “Pale Blue Dot” & whether or not there’s more we can do to keep it as special as it is, and an undeniably engaging adventure & sonic voyage into melody & music that’s unlike any other.  No matter what they do, Andrea Pizzo And The Purple Mice are gonna stand out by their name along; it just so happens that they make music capable of separating themselves from the rest as effectively, 100%.

Find out more about Andrea Pizzo And The Purple Mice at their official homepage at:  https://andreapizzo1977.wixsite.com/purplemice