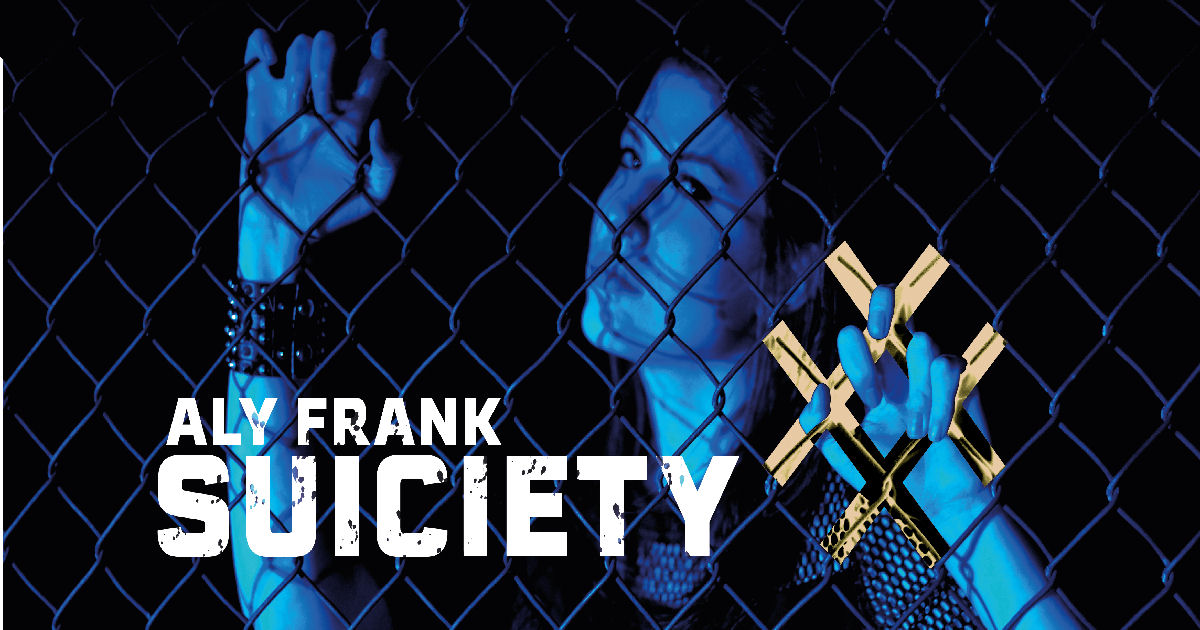 If you look back in the history of these pages, you’ll find a review from back in 2015 when we checked out the music of Aly Frank for the first time through a killer single that she’d put out called “When I’m Gone.”  Actually…here…I’m make it even easier for you so you don’t have to search – click here to read it.  To sum it all up in a quick statement or two here for ya though, it was immediately apparent that Aly was a born entertainer…there can be little to no doubt about that whatsoever after even a quick listen.

Not only was I massively impressed with her confidence & talent back then, but she also sounded more determined than most…you could tell she was going to make her mark in music one way or the other, come hell or high-water.  Essentially, I’d be the last person on earth to say I’m surprised to see her back here on our pages, even if it is nearly four years later at this point; it ain’t like she hasn’t been busy, she’s released a ton of music since we’ve last seen her here!  There’s the single “Think About You” from 2018, the release of her debut record Introduction earlier this year, & there are a TON of collaborations you can find Aly’s been a part of as well out there in the online realm.  From the very looks of things, you can tell that Frank has completely established her reputation and become the sought-out voice in music that I was absolutely certain she would be when I first had a chance to listen to her way back when.  Not a question in my mind about whether or not she deserves the recognition and accolades – she did then, she does now – Aly Frank is as reliable, professional, and talented as singers & artists can be out there.

All that great stuff being said, it’s been a while since I’ve personally heard what she’s got going on – so to hear her freakin’ THRIVING like she is on her new single “Suiciety” was a supreme treat for the ears.  I want it on record – I never doubted her for a second…and I knew full well before pushing play that likely anything I’d hear from her would be spectacular – but there’s something to be said for not having your expectations let down in the slightest either, isn’t there?  I try not to have expectations of any artist or band out there…but it can be real tough not to when you can recognize world-class talent when you hear it; Aly’s one of those rare gems in the scene that you know is always going to put out a quality tune.

As high as those expectations may have been, there’s an argument to be made she’s even exceeded them with this latest single.  One of my favorite things about Aly as a writer, singer, and artist, is just how unafraid she is to let us all on the inside of her thoughts, feelings, and emotions.  When you consider the genre…or the crossover, hybrid style she’s working with…and how glossy the combination of Pop/Electro/R&B can be at times, especially when it comes to what’s out there in her field of peers – you can appreciate the added strength it would take to sing about important things, as opposed to just creating another savagely catchy commercial cut.  Aly’s built of the strength required to break through and stand apart from the rest of what’s out there, by getting personal in a genre you might not expect it from, while still being able to fully deliver on pure audio entertainment that’ll reach all kinds of listeners.

When it comes to “Suiciety,” I spent my first couple listens honestly just marveling at how everything fit so perfectly into the right place.  From the music to the microphone, production to performance, Aly’s crushing this single, bringing a perfect mix of boldness & fragility to an inspired verse & chorus that has her sounding at her best yet again.  I’m a firm believer that when the material you create is important to you on a personal level…when you form that attachment, that genuine bond, that investment in the meaning & emotion in the words, melody, and music – you come out sounding as amazing as she does here.  Ultimately, “Suiciety” sounds real to us, because you can absolutely hear that it’s real to her.

Frank’s new single dives deep into a personal tale entwined with observations on where we’re at right now as a society…what we have deemed important, what we hold dear, what we look to for confirmation, and what also tears us apart…and she’s holding the mirror right up to all of us here on “Suiciety.”  For example, the definition of “Suiciety” is supplied right there on YouTube where the single is posted up…it reads:  “’Suiciety’ definition: a society that is slowly killing itself.”  She ain’t wrong – and she’s definitely right to call us out on what we’ve become…because we have every opportunity to avoid the pitfalls of social-media and comparing ourselves to the ridiculous standards of imagery we see on The Gram, or anywhere else online for that matter.  We have the opportunity to do more than we do, and to be much less self-involved than we are…Aly Frank’s “Suiciety” addresses all of this & more – in fact, she’s outright fighting for it, pleading to herself & to all of us to find that courage required to resist.

Because we’ll consume ourselves to our demise if we let it happen…and that’s where real art & music steps in to do what’s right in a sincere effort to help us avoid trouble ahead & the trouble we’re already in.  She’s got an exceptional way of creating accessibility in her music by being so honest, relatable, and real – and even in the darkest moments of a song like “Suiciety,” you’ll hear in her words and in her voice that she’s never giving up hope.  Sure, it might not be the happiest tune you’re going to hear in 2019…I can understand that – but I’ll be the first in line to trade-in that next song about sunshine and good-times for a single like “Suiciety” that so boldly dives into the dark we share, in search of the light.

Plus, I mean, c’mon…this is Aly Frank we’re talking about here.  Obviously she sounds amazing!  Another highlight in her catalog as far as I’m concerned – I really don’t think she’s capable of letting us down.

Find out more about Aly Frank at her official homepage at:  http://alyfrank.com