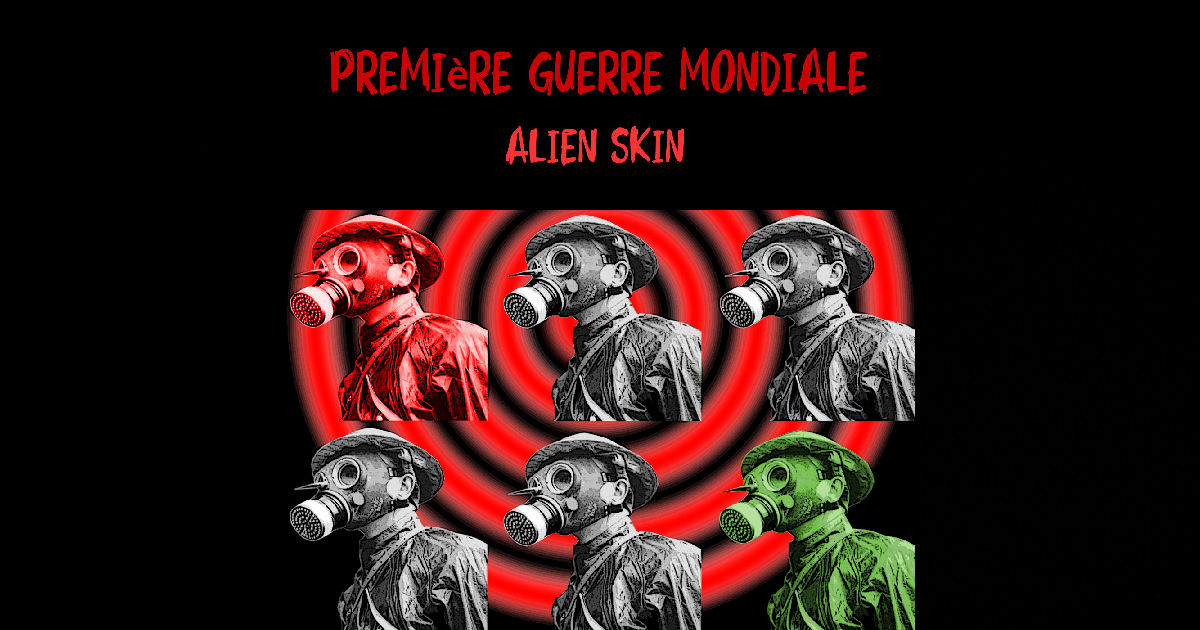 I mean, I’m doing pretty damn good so far as selection goes…Alien Skin & I go back a few years now here at our pages and this is a one-man musical project I know I can always count on to deliver something special through the speakers.  Maybe I played it safe in coming back to music I knew I’d be interested in, but hey, like if you’ve got the choice to do so, wouldn’t you do the same?  C’mon, you know you would!

So there you go – I made my case, now let’s do the try-to-describe-music-in-words thing.

Much like the name of this project implies, Alien Skin is often most successful in its ambitions when reaching out into the further realms of what music can be like to experience.  Over the years Alien Skin has made music that has refused to conform to the norms in pursuit of a higher-art combination in sound, discovering many successful ways to entertain & surprise in the process as time went on.  George Pappas (essentially the wizard behind the curtain of OZ) has maintained a very humble and exploratory journey through the experimental side of music while still able to keep the people engaged with catchy synth sounds or clever concepts to capture our interest.  The dude’s a master at keeping music fresh, even in its often retro-laden sound; and most importantly perhaps, not just fresh for us, but himself as well.  When Alien Skin pops up on my playlist I know I’m in for something the artist making the music is committed to & just as enthusiastic about creating…as I’ve always said, that matters to me as a listener.

Featuring the voice of his “robot girl friend, Capucine” – George has created a musical commemoration of the end of the “Première Guerre Mondiale,” aka, The First World War, in France specifically, in tribute.  Technically, “Première Guerre Mondiale” was released back at the end of 2018, which marked 100 years since WWI ended in 1918.  Within the lyrics read aloud in Capucine’s succinct robotic narrative, she’ll list “a number of towns that were in the brutal thick of it,” while the music created by George remains professionally restrained and engaging AF at the same time.  At its best, Alien Skin is always capable of flaring up with wildly-controlled creativity that reveals immaculate dedication and genuine curiosity of the art itself…always pushing towards uniqueness and an entire experience different from the last.  In terms of a batting average throughout the catalog over time, considering how far George has been willing to lead us into the beyond, you’ve gotta admire just how many times he’s come out with big wins through the speakers over the years, and I’d argue he’s definitely delivered another truly captivating cut here with “Première Guerre Mondiale.”  The narration works flawlessly into the mechanics & movements of Alien Skin’s new single and gives it an extra-killer layer of unique sound into “Première Guerre Mondiale” that really serves the music well in terms of how it’s structured & broken up into each verse.  Leaving it to the music to create the hooks of the instrumental chorus, Alien Skin has made another wise choice and come out shining like gold in the giant percussion-laden sounds becoming massive MVPs & heroes of this track as George takes this cut to the next-level without using a single word in between verses.  Production & mix-wise…LOVED listening to this tune and everything it has to offer within its inventive and ambitious atmosphere.  It kind of reminded me of something like a more subtle version of Thom Yorke’s “All For The Best” type-sound or level of innovation in the instrumental sections, but along with like, the artistic integrity & poetical ingenuity of an indie band like The Other Colors, coincidentally based out of France, who we also love here.

All-in-all, I think “Première Guerre Mondiale” is a solidly engaging tune and accomplishes its mission with a sound that mixes the seriousness of its subject with its tributary goals spot-on, while still retaining the ever-surprising nature & catchy-but-curious sounds & style of Alien Skin.  “Première Guerre Mondiale” shows this project is still continuing to push those musical boundaries & creativity within the art, while also revealing a master’s degree of control by giving your ears just enough of everything they’d want without a single iota or second of this single overloaded or out of place.  Wonderful first cut to come back to!

Find out more from the official homepage at:  http://www.alienskinmusic.com