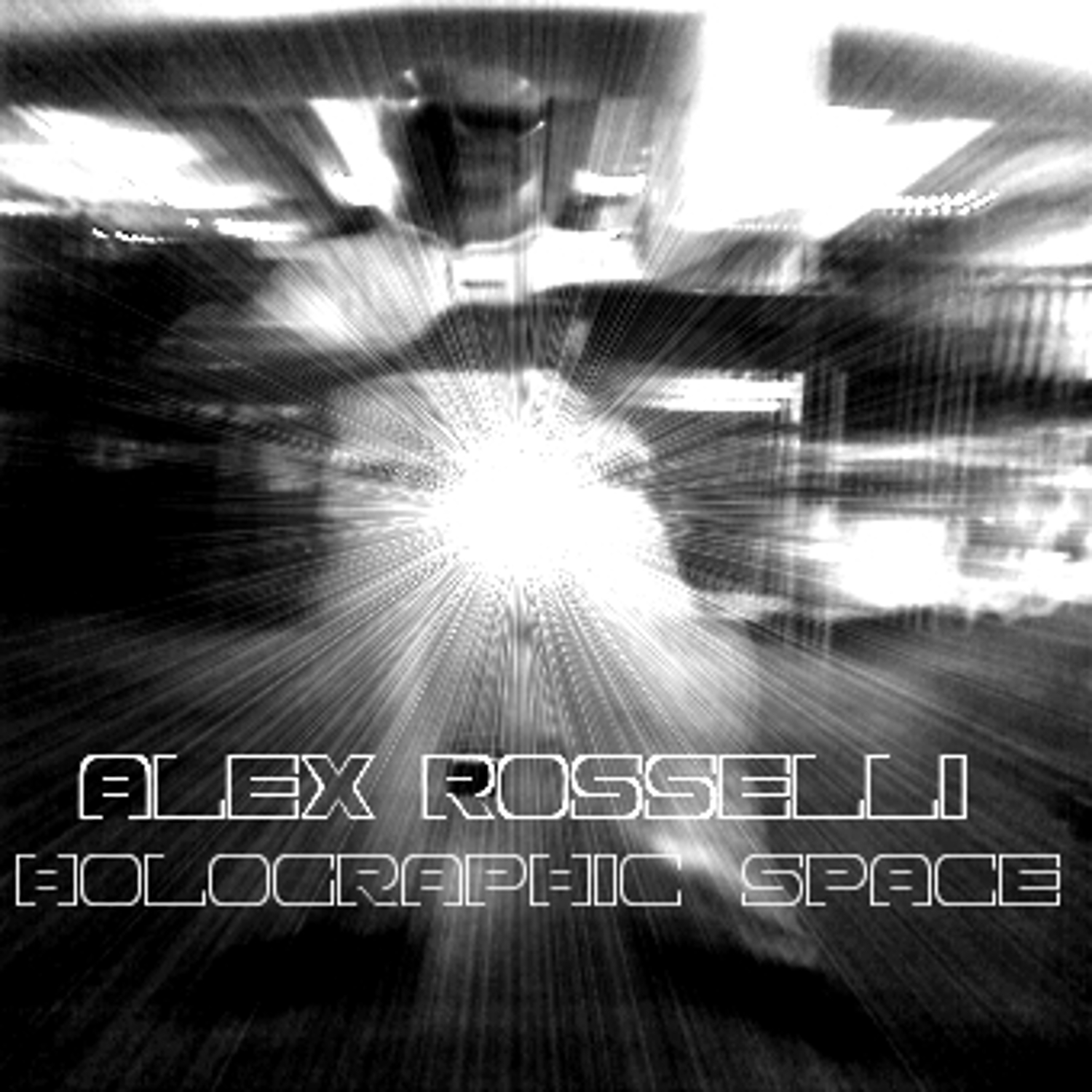 I tell ya…instrumentalists can quite often have some of the most vibrant and vivid songs you’ll ever hear; combine that along with their intended themes and your own imagination to fill in the blanks and you can end up on a pretty wild ride overall.  Alex Rosselli’s new record, his eighth, entitled Holographic Space, makes an otherworldly attempt to blast-off into the atmosphere through ten new guitar-driven tunes that soar with talent and dynamic sound.

What you might want to know beforehand, direct from the creator himself, is that Holographic Space is ‘not only about a travel in the unknown space, but in a dimension where past, present and future are fused in a single sensory perception.’  Digest a comment like that and understand that though there might not be any words, a ton of thought still goes into the direction and sound of these songs he writes.  You get that launch-feeling with “Zero Point” as it works a repetitive rhythm & groove that expands to reveal an immense amount of innovative, intricate & creative guitar-work throughout.  A solid start to the record that has a wild & quick-pace to its drumbeats and clever choices made to establish the atmosphere of the record through its opening song.  While on the surface-level “Zero Point” might sound a bit on the repetitive-side for some, those that really take a close listen will hear the amount of creativity & style crafted carefully into the lead alongside the hypnotic rhythm.

Rosselli continued with his description of the record, providing other details and insight you should probably know about as well – ‘It’s about meetings with alien civilizations and holographic shapes.  At the end the starships head into a worrying black hole…and no one knows where it is going to – one way trip!’  The concepts in the music begin to take more shape with the heavy grooves of “Interferences,” which sounds like it could either be rockin’ through the cosmos or chilling out in orbit depending on which of its parts you’re listening to.  A solid combination of blues-rock & experimental ideas – Rosselli puts in an incredible performance on the lead throughout the song’s first two-minutes and continues to take you on a journey through skilled solos on “Interferences” right to the track’s final moments.

“Speedwall” further develops the themes immediately by really sounding like it’s right out of this world.  Whatever filters or effects that Rosselli is uses to create the space-like sounds within these songs is righteously cool…I believe you can hear a similar sound on “Zero Point” though the overall ideas and sounds between the two songs are entirely different.  The emotion of “Speedwall” is tangible and genuinely connects through its howling melancholy…you really feel this one.  By comparison to the opening two tracks…this instantly became my favorite; the genuine passion and connection that Rosselli has created here in his music gives you chills that creep right inside you.  Great ideas here too; while the structure and sound might be a little more straight-ahead or familiar to us, the added surrounding elements keep this song unique in its mood, attitude and atmosphere as a result.  Captivating writing, contrast and performance on “Speedwall,” no doubt about it.

As if turning the spaceship radio-dial and magically landing on a signal broadcast out of the golden-era of rock’n’roll, Rosselli continues to make smart choices on “Signals From The Past.”  Maybe I’m wrong about the concept that drives this one being like…an eternal echo through space that’s come from the days where guitars were truly first turned-up to ROCK…but it sure sounds like it to me.  There’s a real classic sound that drives the song’s first eighty-seconds or so before Rosselli fires-up the rocket for lift-off once again.  The solos on “Signals From The Past” are some of the most impressive on the record so far…towards the end I wanted to hear them a bit more than the repetition of the rhythm-guitar’s part; I think if there’s anything to say about the mix between the two it’s that they both came out fairly evenly…and I’d probably recommend that Rosselli put his talents out there even further with a couple added notches of volume.

Where things got really tough was when “Tell Me” began.  There is…SO MUCH…that I appreciate about this idea, atmosphere, sound…and where it’s going; that being said…I think it needs to be re-thought and perhaps re-recorded…in my opinion.  Rosselli’s a gifted guitar-player and overall musician with a talented ear for sound…so I don’t need to tell him that those chords that sound ‘off’ throughout the song’s beginning are wide of the mark – he would already know that.  The question becomes more of a ‘why would he leave them in’ and ‘what’s he trying to say’ by leaving them there?  It’s possible that “Tell Me” represents that communication with other life-forms as intended by the themes he’s described – and maybe the off-notes are supposed to represent sounds, ideas and communication that we don’t quite understand.  Or maybe I just don’t get it myself!  To me…”Tell Me” sounds like it needs a tune-up to bring the most out of its intentions as it stands before the two-minute mark; from that moment on the song soars to a solid victory in tone and exploration.  While I might be tossed-up and have a mixed reaction to the chosen execution on the ideas in the song’s first-half, I’d also argue that it’s also potentially my favorite part of “Tell Me” overall…definitely a strong idea brewing here.

The back & forth stop/start style of “Holographic Shapes” structure ends-up being pretty rad to listen to.  I wasn’t entirely sure on it being entertaining enough to keep the people’s attention at the very beginning, but felt like the electrifying solos played well.  Here’s the thing I’d recommend to Rosselli mix-wise for the future however…and that’s that I’d remind him, he’s a guitar-player at the core of it all, first & foremost!  Seems obvious right?  Not so much in the mix sometimes…and “Holographic Shapes” is an example of how quickly drums can take over the sound of what we hear as listeners.  When you listen to a Vai or Satriani…any of those virtuosos, no matter who they are – they’ve got themselves up loud’n’proud because they truly ARE the star of the show; Rosselli is no exception here – and certainly shows the potential and passion to be up there with the very best.  In my opinion – the mix on the music should reflect that as well…he’s got some incredible solo-parts that get a bit lost in between the equally present sound of the rhythm-guitar and drums.  A bit more separation in the sound will lead to that more dynamic-punch in the mix and satisfying listening experience.

Again, it’s by comparison that you can hear & understand that he certainly knows when a mix can be ‘right-on’ as well – listen to the way “Contact With The Deep Space” sounds!  Great soaring tones and inventive, wandering solos that are unafraid to confident explore the fret-boards and beyond.  Those lead-parts come through ringing perfectly throughout the first three-minutes solidly…as the song’s surrounding elements rise-up around them, the slowly creep into the mix more & more until they’re entirely gone.  Moves like that definitely make sense…you can hear the idea take shape, do its thing and make its exit like a mission-complete…and I felt like that’s what made the fuller-sound of the end of “Contact With The Deep Space” work.  I really found the opening lead’s choices to be interesting & intriguing to listen to as this song began too…they’re certainly not typical ones – but they’ve got real amazing texture, tone and sound to them that I really felt was audibly fascinating to experience.  It breaks into a wicked little friendly jam for its chorus…again displaying great contrast, versatility and dynamics between parts as he switches & transitions the sound of what we hear.

Bringing some additional funk into the Rock, one of the most expressive tunes you’ll find on the record comes though the sounds of “Bent Lightbeam.”  Great crunch in the rhythm-guitars, the bass has a presence like we’ve yet to experience on the record so far…and the both the lead & rhythm really explode with tremendous energy and life in the chorus of this tune.  Impressive guitar-work from Rosselli surges throughout the different styles, sounds and mood-swings of “Bent Lightbeam” and shines superiorly throughout the vibrant & colorful solos.  What becomes a highly psychedelic experience as it evolves never forgets to bring its A-game hooks along with it – “Bent Lightbeam” was entirely entertaining from its beginning to end.

“Atomic Accelerator” sounds like the hurried beginning of the venture back to where the journey first began, ripping through the cosmos once again towards home.  Dig the pace, always dig the ever-reliable solos of Rosselli…he’s got “Atomic Accelerator” fueled with intensity in the drumbeats & cymbals as he glides up & down the frets with ease and precision.  Really dig the final switch in the grinding energy of this cut as it headed into its final thirty-seconds…there’s an added element of danger & menace that slowly creeps in to take over.  Once Rosselli gets himself moving on this one, he really takes the lead-guitar for a ride throughout several key spots in this song to create some highly memorable moments within “Atomic Accelerator” that sound fantastic.  Drums give him a bit of an issue in a couple spots in the writing, recording & mix…but for the better part of this tune it’d be tough for most people to hear any trouble he’s having.  Overall, Alex puts in such an incredible effort on any given tune that you have to admire the sheer tenacity and passion he plays with…some of these solos stretch miles-long, and in that sense it’s quite easy for the ears to forgive a half-second’s misstep or slight variation on tone.

Back “Into The Funnel” to end the Holographic Space experience, Rosselli ends the record on the vibrant & enthusiastic themes that have dominated the sound & ideas on the record.  You could make an argument that he’s taken his progressive guitar-laden instrumentals right to the edge of punk-rock terrain on parts of “Into The Funnel” as he kicks-up a final cloud of space-dust on the album’s last track.  He gets pretty wild with it…especially in the drum-department again…which has kind of also been an underlying theme throughout this album.  I appreciate the ideas he’s been putting forth on them throughout the record…and I definitely like that he’s writing parts for them as opposed to simply having them play a static beat for each and every moment…BUT…they’ve also undeniably caused him a few issues with timing on a few songs throughout the record with tiny stuttered steps and millisecond differences that add-up to him having to respond quickly as he plays his guitar-parts.  I’ll say this – the man recovers extremely well in those scenarios…I don’t think most people would notice any issues even exist for the most part as they listen.  Rosselli himself knows though…as musicians, we know…if you’ve ever played to a track that gives you extra trouble through its structure, mix or assembly…you know too; it’s always worth attempting that one or fifty more times necessary to get the idea nailed as tightly as you can, especially if you don’t have management breathing down your neck for that next single.  Complex ideas like Rosselli’s can be the hardest to nail down – but always the most rewarding when you can hear everything going right.  As I mention frequently and most-often – the most important thing is that the ideas are there – and they certainly are here on Alex Rosselli’s Holographic Space.  It’s the trip, journey & experience he envisioned this concepts of the record to be & a ride definitely worth taking.

Find out more about Alex Rosselli at his official page:  www.alex-rosselli.com